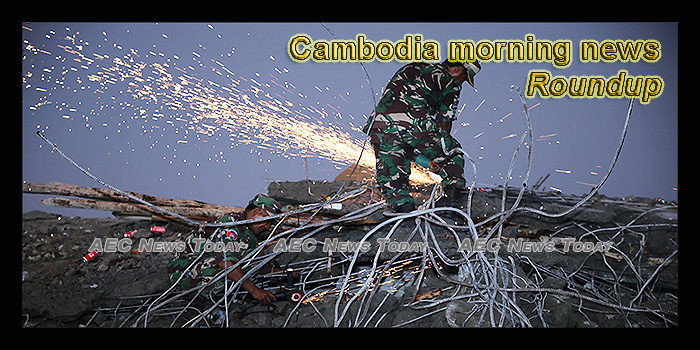 Child deaths in Cambodia spark call for construction freeze
(Thomson Reuters Foundation) – After six children died when a building site collapsed, the Cambodian workers’ union on Wednesday called for a halt to a construction boom that has killed more than 60 people in seven months, while the government vowed to tackle child labour.
— Reuters

Cambodia’s garment workers fret over deadly daily commutes
Gripping her friend’s shoulder as a truck packed with 30 Cambodian garment workers tears down a pot-holed street, Nguon Sanit says her days are bookended by fear of dying on the kingdom’s treacherous roads.
— CNA

FDI to Cambodia Values at US$3.5 billion in 2019
Cambodia attracted foreign direct investment (FDI) worth in total US$3,588 million in 2019, an 11.7 percent increase compared to 2018, pointed out a report, stressing that nearly half of the total investment was from China.
— AKP

Civil Groups and NGOs Appeal to the Authorities to Act regarding the Kep Tragedy
“If that case is absolved, this will show that there is no law enforcement for the future,” they said in a petition to the government. “The case of the building collapse in Kep, the officers enforcing laws and regulations and the authorities in charge in that case must face the law. Do not forgive anyone: initiator or accomplice.”
— Thmey Thmey

Foreign Arrivals to Cambodia Projected to Grow at 6 percent in 2020
The number of foreign visitors to Cambodia is expected to keep increasing this year, but at a slower rate compared to the previous years.
— AKP

Man hacked to death for refusing to drink wine
A 57-year-old man was sent to Svay Rieng provincial police on Wednesday for allegedly hacking his cousin to death the previous day in Donsa Village, in Svay Chrum district’s Donsa commune.
— The Phnom Penh Post

Cambodian Court Orders Testimony in Kem Sokha Trial From ‘Witness’ Who Never Spoke With Him
A court in Cambodia’s capital on Wednesday issued a summons requesting that a former elected official with the country’s banned opposition in Banteay Meanchey province give testimony next week at the treason trial of his party’s president, Kem Sokha, despite never having spoken with him.
— RFA

The Bigger Problem Behind Cambodia’s Building Collapses
On January 3, another multi-story building under construction collapsed in Cambodia, this time in Kep province, killing at least 36 people, including six children.
— The Diplomat

US Ambassador Hopes to See Better US-Cambodia Relations
The US Ambassador to Cambodia Patrick Murphy says he wishes to see better relations between the United States and Cambodia.
— Fresh News

U.S. Furniture Industry Eyes Cambodia as Vietnam’s Wages Rise
A shortage of workers in Vietnam — a huge beneficiary of the U.S. trade war with China — is getting severe enough that some furniture makers are now scouting Cambodia and Bangladesh for factories, according to one industry chief executive.
— Bloomberg

Cambodia Deports North Korean Workers, Shuts Down Businesses to Comply With Sanctions
Authorities in Cambodia have arrested 16 North Koreans, shortly after announcing that they would shut down North Korean-owned businesses in an attempt to comply with U.N. sanctions, which stipulate that all North Koreans working abroad had to be repatriated by the end of last year.
— RFA

Ministry report shows rise in drug crimes last year
The number of drug-related crimes in the Kingdom rose by 19 percent from the previous year and more than 20,000 suspects were arrested, according to the Interior Ministry’s anti-drug trafficking department.
— Khmer Times

Customized Vehicle License Plates Now Available in Cambodia
As indicated at the ministry’s website, prices will range from 2 million riels (around $490) for basic ones to 1 billion riels (around $246,000) for truly special plates. And the process to obtain them will involve three phases: purchase, offer and bid.
— Thmey Thmey

Foreign exports hurting local brick kilns
Brick kiln owners have complained about falling prices due to the rise in imports from neighbouring countries amid the boom in the construction sector.
— The Phnom Penh Post (video)

Kingdom records thousands of TB cases
The National Center for Tuberculosis and Leprosy Control yesterday said there were 22,000 cases of tuberculosis in the Kingdom last year.
— Khmer Times

Cambodian-American seeks US election
A prominent member of the Cambodian-American community in the United States has announced she is running to be a Select Board member in the Massachusetts town of Bedford.
— Khmer Times

US begins 2020 as celebration of diplomatic ties
The US embassy on Wednesday kicked off a year-long celebration of the 70th anniversary of US-Cambodia diplomatic relations at the capital’s Futures Factory in Daun Penh district.
— The Phnom Penh Post

Cambodia-U.S. Mark 70th Anniversary of Establishment of Diplomatic Ties
U.S. Ambassador to Cambodia H.E. W. Patrick Murphy and the embassy’s staff this afternoon travel around Phnom Penh on three-wheel rickshaw to celebrate the 70th anniversary of the establishment of diplomatic relations between Cambodia and the U.S.
— AKP

Cambodia Concerned over US-Iran Tension; Urges for Peaceful Resolution
Koy Kuong, spokesman for the Ministry of Foreign and International Cooperation, said Wednesday that the Kingdom is concerned over the escalating tensions between the United States and Iran, and that Cambodia wants to see the two sides resolve the issues peacefully through dialogue.
— Fresh News

CDC Approves 4 Investment Projects in Early January
Early this year, four new investment projects worth in total US$17.2 million have been approved by the Council for the Development of Cambodia (CDC).
— AKP

Four in M’kiri court for logging
Mondulkiri provincial Forestry Administration sent four men to court for their involvement in a forest crime in Keo Seima district.
— The Phnom Penh Post