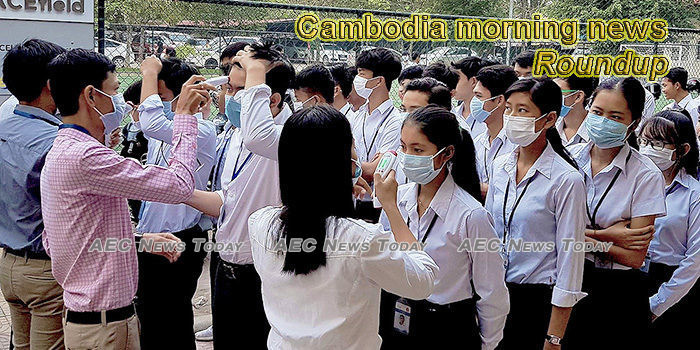 Hun Sen Ready to Visit Cambodians in Wuhan City if China Authorizes his Visit
Speaking during a meeting with the Cambodian community in Seoul where he is attending the Universal Peace Federation World Summit 2020, Hun Sen spoke of the students stranded in Wuhan City due to the Coronavirus(2019-nCoV) outbreak. “I will visit our students in Wuhan if the Chinese government allows,” he said.
— Thmey Thmey

Phnom Penh Residents Want Cambodians In China Evacuated
Residents of Phnom Penh said on Friday that they were concerned about the health of Cambodians stranded in China, on account of the viral epidemic, and wanted the government to evacuate them from Wuhan, the epicenter of the outbreak.
— VOA

Cambodian Court Rules Against Returning Passports, IDs to Former RFA Reporters
A court in Cambodia’s capital Phnom Penh has rejected a request by two former RFA reporters to return their passports and identifying documents after an appellate court ruled last week to continue a reinvestigation into espionage charges against them, according to their lawyer.
— Radio Free Asia

Hun Sen offers Wuhan visit, while Pakistan resumes China flights
Even as many countries curb travel to and from China amid the coronavirus outbreak, two countries with close ties to Beijing — Cambodia and Pakistan — are signaling support by keeping their doors open.
— Asia Nikkei Review (paywall)

As EU decision on tariffs looms, Cambodia garment industry gets nervous
A rare public spat has broken out between Cambodian garment factories and the international brands they supply as concerns grow that the country will soon lose its tariff-free access to Europe.
— Asia Nikkei Review (paywall)

Chinese Nationals Returning Home from Cambodia Test Positive for the Wuhan Virus
Ministry of Health spokesman Ly Sovann Monday said that he was informed that these three persons had come to Cambodia last month on the same flight as the Chinese man who was found to carry the coronavirus when he landed in Sihanoukville City.
— Thmey Thmey

EU-Asean relations could be better, says Hun Sen
Cambodia’s Prime Minister Hun Sen stated that the EU has poor relations with some of the members of the Association of Southeast Asian Nations (ASEAN), including Malaysia, Indonesia, Cambodia, Myanmar and the Philippines.
— Khmer Times

Calm returns to Cambodia after coronavirus-induced panic
The fear caused by the first coronavirus case confirmed in Cambodia has lessened, this according to Fr Giovanni Tulino, a missionary with the Pontifical Institute for Foreign Missions (PIME).
— Asia News

Tackling fake news amid a coronavirus outbreak
Amid the outbreak of novel coronavirus (2019-nCoV) that has infected more than 14,000 people worldwide and caused over 360 deaths, false claims and fake news about the spread of the virus are on the rise.
— The Phnom Penh Post

Hun Sen not afraid of travelling to epicentre of coronavirus outbreak
Following his decision last week not to evacuate Cambodians in China, Prime Minister Hun Sen on Monday said he would go to the Chinese city at the epicentre of a viral pandemic if granted permission by Chinese authorities.
— The Phnom Penh Post

Land dispute case sent to Kampong Speu governor
A land dispute case involving 20ha has been referred to the governor of Kampong Speu after the alleged victims – 156 families who lost their land – petitioned the Ministry of Land Management, Urban Planning and Construction to get involved.
— The Phnom Penh Post

Gov’t to aid students facing food insecurity
The ministries of Economy and Finance; and Education, Youth and Sport, will implement a food programme for 50,000 children in 205 target schools using community products.
— The Phnom Penh Post

Drainage Blocking Buildings Demolished In Sihanoukville
The Joint Task Force at the Provincial, Municipal and Provincial levels in Sihanoukville continued throughout the day of February 3, 2020 to restore the drainage canal in the Group 30, Sangkat 3, Sihanoukville. Houses illegally built have been destroyed.
— CNE

Over 5,000 Associations and NGOs Recorded in Cambodia
As of December 2019, a total of 5,564 associations and non-governmental organisations (NGOs) have deposited relevant documents and have been registered at the Ministry of Interior.
— AKP

IFAD launches development project aimed at rural areas
The International Fund for Agricultural Development (IFAD) and the European Investment Bank (EIB) have provided the government with $122 million for a rural development project, a press release issued on Monday said.
— The Phnom Penh Post

Over 200 killed on roads in January
More than 200 people were killed in road accidents in January alone, according to a report by the Traffic Police and Public Order Department.
— The Phnom Penh Post

Forest community marks anniversary with call to action
The Sorng Rukhavorn Forest Community in Oddar Meanchey province has issued a call for all to take part in the protection and conservation of forests and wild animals.
— The Phnom Penh Post

Officers arrest killer of monkey in Mondulkiri
The Mondulkiri Provincial Court has charged and detained a man accused of hunting the endangered Douc Langur monkey with an illegal weapon in the Keo Seima Wildlife Sanctuary.
— The Phnom Penh Post

Kingdom has high hopes over UK trade privilege retention
Cambodia’s government is hoping to retain its preferential trade status with the UK after it left the European Union.
— Khmer Times

Ministry urges livestock production boost for local market
The Agriculture Ministry yesterday urged farmers and the private sector to increase the production of pigs and cattle to supply the local market following a drop due to African Swine Fever and other factors, leading to increased imports last year.
— Khmer Times

Three Coronavirus carriers from Cambodia identified in Shenzhen
Three Chinese passengers who were on the same flight as Cambodia’s first coronavirus patient were diagnosed with virus after returning to Shenzhen from Cambodia.
— Khmer Times

Kingdom welcomes return of blue helmets from Lebanon
The Kingdom yesterday welcomed the return of 180 blue helmets who recently completed their one-year peacekeeping tour of duty in Lebanon.
— Khmer Times

Ministry reports alleged border encroachment
The Interior Ministry Border Police Protection Unit has thwarted Thai soldiers trying to erect barbedwire along the border of the white zone area, part of Oddar Meanchey province that both Cambodia and Thailand are yet to reach an agreement regarding demarcation.
— Khmer Times

Australian missionary’s detention ‘justified’
The Kandal Provincial Court has disputed claims that an Australian Christian missionary who has been placed in pre-trial detention on a fraud charge had been unjustly imprisoned.
— The Phnom Penh Post