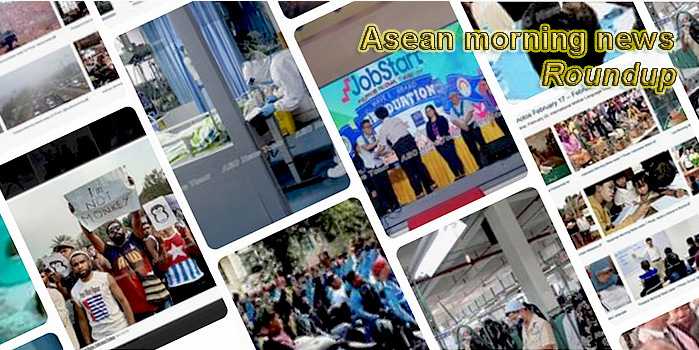 China gives helping hand to Asean nations to fight coronavirus
The Covid-19 (coronavirus) virus is spreading rapidly around the world.
— The Star Online

Three-way fray spells toil and trouble in South China Sea
A new three-way dispute has broken into the open in the South China Sea, one that brings two Association of Southeast Asian Nation (ASEAN) members into conflict along with China over coveted energy resources.
— Asia Times

Areas for improvement in ASEAN multilateralism
The centrality of the Association of Southeast Asian Nations (ASEAN) is often mentioned and emphasised by government officials and scholars in the Asia-Pacific region.
— The Asean Post

In ASEAN, gender equality still very much a ‘tick-the-box’ issue
A look at ASEAN’s busy calendar of annual meetings suggests that the organization is still predominantly run by men – currently, nine out of 10 ASEAN leaders and foreign ministers are male.
— The Jakarta Post

Asean’s response to Covid-19
Right after assuming the chairmanship of Asean in 2020, Vietnam has been challenged by the outbreak of Covid-19 disease.
— Khmer Times

Southeast Asian countries take actions against COVID-19
Countries in Southeast Asia are taking drastic actions in response to the COVID-19 outbreak as they have confirmed more infected cases over the last few days.
— Vietnamplus

Fighting for women’s rights in ASEAN
Prominent women like Singapore’s President Halimah Yacob, Co-Founder of ride-hailing transport services Grab – Tan Hooi Ling and even sports legend, Nicol David have made headlines in the region for their tremendous achievements.
— The Asean Post

Minister of Tourism says virus will be as bad, if not worse, than SARs was for industry
Minister of Tourism, Thong Khon, has drawn comparisons between the current COVID-19 outbreak to the Severe Acute Respiratory Syndrome (SARs) pandemic that occurred in 2003 and devastated the tourism industry in Asia.
— Khmer Times

The First Case of COVID-19 Affecting a Cambodian is Confirmed
A 38-year-old Cambodian man in Siem Reap City tested positive for the Coronavirus Disease 2019 (COVID-19) after having been in direct contact with an infected Japanese national, the Ministry of Health announced Saturday evening at a press conference.
— Cambodianess

Coronavirus: Immigration Denies Entry of 118 Foreigners
The Immigration Directorate General has denied entry of 118 foreigners who previously stayed in China, the epicenter of the novel coronavirus.
— Tempo.co

Malaysia, Thailand bar cruise ship over COVID-19 fears
Malaysia and Thailand have barred a cruise ship carrying about 2,000 people, including dozens of Italians, from docking due to fears about the new coronavirus, an official said Sunday (Mar 8).
— CNA

Myanmar earns $4.6 bln from total border trade
The value of border trade reached US$4.6 billion between 1 October and 28 February this fiscal year, recording an increase of $493 million compared with the same period last FY, according to figures released by the Ministry of Commerce.
— The Global New Light of Myanmar

No country for young women? Myanmar’s battle against rape
Officially, rape hardly happens in Myanmar and domestic abuse is non-existent. The reality? Violence against women is so pervasive it is regarded as normal — and as a result — woefully underreported, says lawyer and activist Hla Hla Yee.
— Bangkok Post

Gov’t exerts all efforts as Covid-19 cases rise to 10
The Department of Health and the Inter-Agency Task Force for the Management of Emerging Infectious Diseases have intensified efforts to contain the spread of the coronavirus disease (Covid-19), as four new cases were confirmed Sunday, bringing the total number of confirmed cases in the country to 10.
— Philippine News Agency

LOOK: Despite swarm of Chinese boats, PH building up Pag-asa Island
Chinese vessels that appear to be fishing boats but are more likely to be militias have surrounded Pag-asa (Thitu) Island in the West Philippine Sea for more than 450 days, as the Philippines quietly repairs and builds structures on its main outpost in the contentious waters.
— Rappler

80 Thai workers returning from South Korea escape airport, search underway
Thai media report that some 80 Thai nationals, out of a total of 200 who arrived at Suvarnabhumi International Airport yesterday on four flights after returning from working illegally in South Korea, have fled.
— The Thaiger

Mask shortage forces GPO to halt sales
The Government Pharmaceutical Organisation (GPO) announced it will stop selling face masks to the public after it was ordered to divert its supply to shore up the heavy shortage at hospitals, according to GPO managing director Withoon Danwiboon.
— Bangkok Post

Vietnam scraps visa waiver for South Koreans, Italians of Vietnamese origin
Ethnic Vietnamese from South Korea and Italy will no longer be granted visa-free entry as part of Vietnam’s fight against the novel coronavirus epidemic.
— VnExpress

Vietnam: Firms create food products for export
The Vietnam Flour Corporation (Vikybomi) has created new food products made from wheat flour and farm produce such as dragon fruit and watermelon amid a reduction in fruit exports to China.
— The Japan News