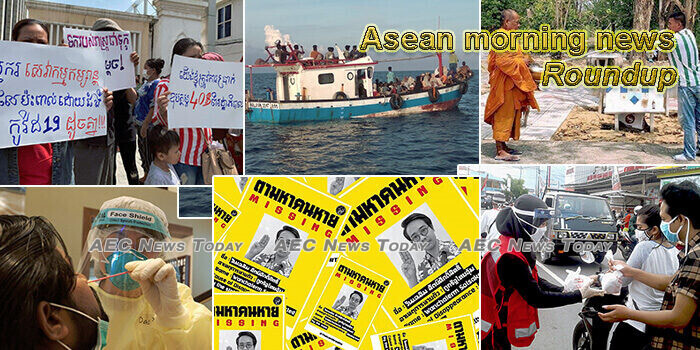 Air pollution still killing thousands in major Asian cities, despite COVID-19 lockdowns: Greenpeace
Air pollution has contributed to a combined estimated 153,600 premature deaths and US$82.4 billion in economic loss so far this year in just 11 major Asian cities, according to a new tool that tracks the impacts of degraded air quality in real time.
— CNA

Thailand’s border trade down 9.7 percent in five months
Thailand’s cross-border trade was down by 9.7 percent year-on-year in the first five months of 2020 due to the impacts of COVID-19 pandemic on the global economy, and neighbours’ closure of nearly all border checkpoints.
— Vietnamplus

Before the virus, Asia’s ecosystems were buckling under overtourism. When the tourists return, it has to be different
Before the pandemic put a stop to most international travel, each year millions of people flocked to Southeast Asia’s white sandy beaches, ancient temples and diverse wildlife.
— CNN Travel

ACB welcomes Asean‘s giving premium to nature in response to Covid-19
The Asean Centre for Biodiversity welcomed the call of President Duterte during the 36th Asean Summit to intensify the regional response against the Covid-19 pandemic and enable the ACB to help curb wildlife trafficking in the region.
— Business Mirror

South China Sea Code of Conduct, COVID-19 pandemic top agenda of meet
The ongoing negotiations for a new South China Sea Code of Conduct and the continuing battle to contain the new coronavirus disease were among the items discussed in the recent Association of Southeast Asian Nations (Asean)-China senior officials’ consultation held for the first time, the Department of Foreign Affairs (DFA) said on Friday.
— Philippine Daily Inquirer

US plans announcement on SCS soon –sources
THE Trump administration plans to make an announcement next week related to escalating tensions in the South China Sea, where Washington and Beijing are vying for military supremacy, according to two people familiar with the matter.
— Business Mirror

From 56 events last year to 36 events next year
Philippine Olympic Committee President Abraham Tolentino said this yesterday after he revealed the number of sports disciplines that have been proposed for the 2021 Southeast Asian Games in Vietnam.
— Manilastandard.net

Most Unsafe Countries For Women In ASEAN
According to a study conducted by Singapore-based research company ValueChampion, Indonesia is the second-most dangerous country for women in the Asia Pacific region after India, while the Philippines is the third most dangerous.
— The Asean Post

PH to push arnis, triathlon in 2021 SEAG
The country will appeal the inclusion of arnis, triathlon, and obstacle course in the 2021 Southeast Asian Games in Vietnam after they were scrapped in the proposed sports lineup, Philippine Olympic Committee president Bambol Tolentino said yesterday.
— Tempo

Asean centrality reckons with its moment of truth
Not since the 1997 Asian Financial Crisis has the Association of Southeast Asian Nations (Asean) been put on a stress test as existential as the COVID-19 pandemic.
— Philippine Daily Inquirer

ASEAN auto industry plummets as of May
The automotive industry in southeast Asia suffered a heavy blow in the first five months of the year with major cuts both in production and sales during the height of the imposition of COVID-19 lockdowns among countries in the region.
— Manila Bulletin

Asia’s gasoline retail seen to slow down in next 2 years
Asia’s oil and gas industry is bracing for slowdown in the next two years due to the coronavirus disease 2019 (COVID-19) pandemic, global consultancy firm Oliver Wyman said.
— The Philippine Star

15 out of 80 Cambodians repatriated from Saudi Arabia tested positive for COVID-19. Tally now 156
Cambodia reported 15 new positive cases of the novel coronavirus (COVID-19), the tally rising to 156, the Ministry of Health said in a press release issued this morning.
— Khmer Times

Traders let over border to pick up merchandise
Checkpoints are being reopened to Cambodian traders for five hours a day as border markets on the Thai side slowly return to business, according to local authorities.
— Bangkok Post

Prioritize Test for Tracing as Pandemic in Indonesia Likely to Rise Until Oct: WHO
The World Health Organisation said Indonesia should start to prioritize tests for Covid-19 suspects to improve its tracing capability — instead of spending about 40 percent of the country’s testing capacity for discharging patients from isolation — as the pandemic accelerated in the country and likely to continue rising until October.
— Jakarta Globe

Social Media Uproar After Lao Schoolboy Kicked Out of Exam For ‘Wrong’ Haircut
A Lao middle-school student near the country’s capital Vientiane was removed from class in the middle of an exam on July 6 for sporting an improper hairstyle, sparking a social media uproar and angering his mother, who said the rules were unclear and her son should have been allowed at least to finish his exam before being sent home.
— RFA

Churning a Dream into Reality – Interview with CEO of Laos Buffalo Dairy, Susie Martin
There will always be moments of uncertainty, bureaucracy, difficult decisions to be made, and many different challenges to overcome.
— Travel News Asia

Mahathir and 5 other MPs form independent bloc, reiterate support for Sabah’s Shafie Apdal as PM
Former Malaysian prime minister Mahathir Mohamad and five Members of Parliament (MPs) aligned to him announced on Friday (Jul 10) that they will remain as an independent bloc and will not join any coalition.
— CNA

US provides $16.5 mln in assistance to Myanmar to respond to COVID-19
The United States Government is providing an additional $3 million to mitigate the spread of COVID-19 in Myanmar, bringing the total U.S. support for COVID-19 response in Myanmar to $16.5 million since February.
— The Global New Light of Myanmar

Turning on the Lights for 450,000 People in Rural Myanmar
More than 450,000 people in rural Myanmar are expected to gain access to clean energy for the first time following the signing of a grant agreement between the World Bank Group and the Government of Myanmar.
— Modern Diplomacy

have lost jobs
FOR now, it’s improbable that they will ever get a chance to act on the franchise of ABS-CBN, but that didn’t stop senators from weighing in on the stunning House committee vote to reject the giant network’s application on Friday, throwing out 11,000 workers in the middle of an economically crippling pandemic.
— Business Mirror

GE2020 Results
Amid a record turnout, the People’s Action Party ended the night with 83 out of 93 seats, with the remaining 10 going to The Workers’ Party.
— The Business Times

Poll shows most Thais still oppose foreign arrivals
A recent survey carried out by the National Institute of Development Administration, or Nida Poll, shows that a majority of Thais still oppose opening the country to foreigners, even if they’re not infected with Covid-19, saying the global coronavirus situation is still very serious.
— The Thaiger

Vietnam says 31 million workers impacted by pandemic, risk of rising unemployment
The economic fallout from the COVID-19 pandemic has negatively impacted about 31 million workers in Vietnam, with 900,000 out of work and nearly 18 million people receiving less income than before, a government agency said on Friday (Jul 10).
— CNA

Coronavirus-free UK pilot, symbol of Vietnam’s pandemic success, to return home
Vietnam’s most seriously ill COVID-19 patient, a British pilot who at one point seemed close to death, left hospital on Saturday (Jul 11) on his way home after a dramatic recovery that attracted national attention.
— CNA