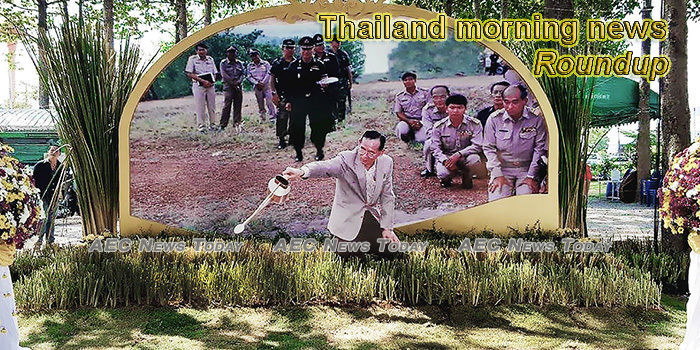 Opposition threatens action against ten rebel MPs for alleged betrayal
The Opposition has threatened to take legal action against 10 of their MPs who were present in the House chamber last night, in defiance of the Opposition bloc’s decision to boycott the meeting.
— Thai PBS News

Thai central bank calms businesses concerns over strong baht
The Bank of Thailand is attempting to quell business concerns over the strong baht, saying the currency will eventually reverse its upward trend and that more two-way movement in relation to the US dollar is expected in 2020.
— The Thaiger

Commerce Ministry pulls out the stops to hike exports
In a last-ditch effort to boost exports in the remainder of this year and early next year, Commerce Minister Jurin Laksanawisit vows to rev up delivery of goods for which purchase contracts have been signed and to promote business matching.
— Bangkok Post

Thailand continues to stay cool, temperatures to plunge further this weekend
Thailand will remain cool at least until Monday, with temperatures plunging further in the North and Northeast as a strong high pressure system from China is blanketing the Kingdom.
— The Pattaya News

Two state agencies appeal against hefty cut in R&D funding
An written appeal was submitted yesterday to the House budget scrutiny committee, by the National Science Technology and Innovation Policy Office (NSTIPC) and the Thailand Centre of Excellence for Life Service (TCELS), objecting to a large cut in their research and development funding.
— Thai PBS News

DSI seizes B15.3m assets from Forex-3D suspects
The Department of Special Investigation has seized more assets worth over 15 million baht from Apiruk Kothi, the owner of online broker Forex-3D, and his network members involved in an alleged fraud.
— Bangkok Post

Wanted MP sneaks into Thai parliament for crucial vote
Renegade fugitive MP Waipote Arpornrat escaped the notice of parliamentary police, and government MPs, when he managed to stroll in the Lower House parliamentary chamber undetected during Wednesday’s sitting.
— The Thaiger

Thailand scores high in Unesco’s adult learning rankings
A report on Thailand’s progress on adult learning and education (ALE) says Thailand has spent more than 4% of its education budget on ALE.
— Bangkok Post

Prawit asks UNHCR to speed up processing
Thailand has urged the United Nations High Commissioner for Refugees (UNHCR) to speed up the work to transfer refugees and asylum seekers from Thailand to a third country, according to Defence Ministry spokesman Lt Gen Kongcheep Tantravanich.
— Bangkok Post

Pupils below global average
The Office of the Basic Education Commission has vowed to strengthen students’ reading skills after pupils were found to be consistently performing below the international average in core subjects, according to the results of the international 2018 Programme for International Student Assessment (Pisa) examinations.
— Bangkok Post

Govt calls on volunteers to battle plastic trash crisis
The government has sought help from 230,000 environmental volunteers in its campaign to help reduce the scourge of plastic waste in the country.
— Bangkok Post

Mahidol inks deal to boost cancer fight
Mahidol University and the National Cancer Institute of Thailand (NCIT) on Wednesday signed an MoU to cooperate in the sharing and storing of cancer patients’ tissue and blood samples at the university’s Biobank.
— Bangkok Post

Thai aquaculture to stay soft in 2020: Report
THAILAND’S aquaculture producers could continue to face softness into 2020, as commodity prices stay flattish, a recent report has predicted.
— The Business Times

Richest man in Thailand calls for less time spent at school with a Thai education revolution
Thailand’s richest man and the boss of what is one of the world’s biggest privately-owned conglomerates employing over 300,000 people has advocated a revolution in Thailand’s education system and a radical approach to preparing young adults for the new economy.
— ThaiExaminer.com

Caver says ‘shamed, dirtied’ by Musk tweet
A British caver who was labelled “pedo guy” by Tesla co-founder Elon Musk said Wednesday he felt “humiliated” and “dirtied” by the tech billionaire’s accusation, and that it amounted to “a life sentence”.
— Bangkok Post

Thailand to establish a national EV panel within three months, to drive policies and speed up development
In an attempt to speed up development of its electric vehicle market ahead of its neighbours, Thailand is aiming to establish a National New Generation Vehicle Committee, and this will be accomplished within the next three months, according to the country’s industry ministry.
— Paultan.org

24 Chinese Nationals Arrested in Bangkok for Running Bitcoin Scam
A Chinese call center scam has been busted in Thailand with 24 Chinese nationals charged for deceiving people to invest in bitcoin.
— Chiang Rai Times

The vicious economic cycle has begun
Do not be surprised to see the government constantly coming out with economic good news such as its claims there are more factories opening than closing and more jobs being created.
— Bangkok Post

Thailand hails co-operation with Việt Nam, Ambassador says
On December 5 every year, Thai people throughout the Kingdom and around the world come together to celebrate auspicious occasions.
— Viet Nam News

PM asks all sides to help move country forward
The Prime Minister has spoken at the orientation ceremony for this year’s National Defence College (NDC) course, asking all sides to maintain the benefits of the country and the people.
— Newsline (video)

Way to go! It’s high five for Thailand
Thailand picked up five more gold medals while the host nation remained at a distance from their regional rivals in the medals standings after the fifth day of the 30th SEA Games in the Philippines on Wednesday.
— Bangkok Post

Department puts up notice on Pareena’s farm
The Royal Forestry Department has put up a notice on a chicken farm run by Palang Pracharath MP Pareena Kraikupt to announce the seizure of the land found to be on 46 rai of forests in Chom Bung district.
— Bangkok Post

Men’s football team dumped out of SEA Games
Men’s football champions Thailand ended their campaign to defend the title on Thursday after a draw with Vietnam.
— Bangkok Post

Officials carry out spot-checks on silly-season gift baskets
You’re only weeks away from receiving a few of those plastic-wrapped and ribboned baskets of unwanted goodies for the silly season – but do you wonder what’s inside most of them?
— The Thaiger

Kind-hearted coffin seller turns a blind eye to repeated theft
The kind-hearted owner of a coffin shop in Buriram, north-east Thailand, has admitted he regularly has to deal with coffins being stolen from his premises, but can’t bring himself to file police reports.
— The Thaiger

Member of gang stealing safe box with B10m caught
A member of the theft gang who allegedly broke into a house and stole a safe box containing cash and valuables worth about 10 million baht has been arrested in Bangkok after six months on the run.
— Bangkok Post

Elon Musk Insists No One Interpreted Tweet to Mean Pedophile
A British cave explorer who helped rescue a dozen boys and their soccer coach from a flooded Thailand cave last year testified Wednesday that Elon Musk branded him a pedophile and sullied his reputation.
— Khaosod English

Jealous boyfriend arrested over triple murder in Chiang Rai – VIDEO
Chiang Rai police have arrested a man for the murder of his girlfriend and her parents, all found shot dead.
— The Thaiger

This week’s Thailand morning news feature photo focuses on World Soil Day and the birth of King Bhumibol Adulyadej, after whom it is dedicated, December 5.