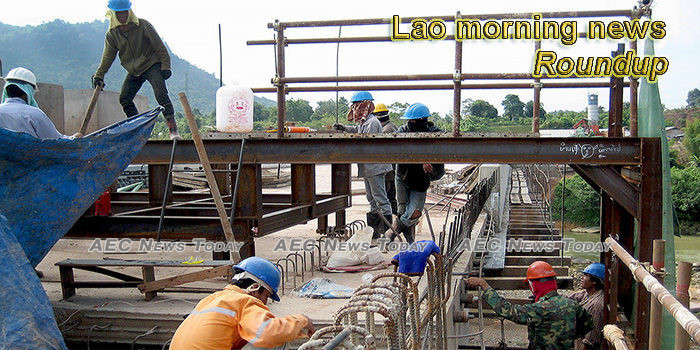 Laos, China join forces to improve Lao tourism
The seminar to promote investment in the tourism sector in Laos was held at Beijing Union University, China, at the conclusion of the Visit Laos-China Year 2019 campaign.
— ANN/Vientiane Times

EU reaffirms support for govt’s education, nutrition initiatives
The Delegation of the European Union to Laos (EU) has reiterated its support for the government’s ongoing efforts to develop and improve the education system and nutrition in all areas of the country.
— Vientiane Times (paywall)

Young business people are economic leaders: Laos PM
The premier told the annual meeting of YEAL held in Vientiane this month that the competition did not mean battling against each other until the other is defeated.
— ANN/Vientiane Times

WB approves additional funding for local disaster recovery
The additional funding, approved in Washington, United States last week, will help reduce the financing gap for reconstruction following widespread floods in 2018, and prioritising investments in flood risk management and the road sector, which accounted for 75 percent of the total estimated damages and losses, according to a press release from the World Bank.
— ANN/Vientiane Times

New school brings smiles to Dongnakham residents
People in Dongnakham village, Adsaphangthong district, Savannakhet province are very happy and proud to have their old school rebuilt and equipped with equipment necessary for the studying of their children.
— KPL

Vietnamese investment eyes hopeful Lao future despite recent setbacks
One of the major projects is the construction of the Nongkhang airport in Xamneua district, Huaphan province; the Laos-Vietnam Cooperation Committee told the planning and investment sector meeting in Vientiane on Monday.
— ANN/Vientiane Times

Climate change exacerbates malnutrition in Lao children
Secretary of the National Nutrition Committee (NNC), Associate Prof. Dr Phouthone Muongpak, says malnutrition is the main reason for high rates of stunting, wasting and underweight among the under fives, which are currently estimated at 33 percent, 9 percent and 22 percent respectively.
— ANN/Vientiane Times

Border provinces of Vietnam, Laos tighten control of migration
Officials of Quang Tri province and two Lao provinces of Savannakhet and Salavan have reached agreement on measures to curb spontaneous migration and undocumented marriages among residents living along the Vietnam-Laos border.
— Vietnam Plus

From the quieter region of Laos, ride-hailing service LOCA emerges to address the potential market that Uber, Grab overlooked
Back in 2017, Souliyo Vongdala, co-founder of LOCA recalled that many people complained about how Grab and Uber are not in Laos at all.
— E27

Govt pushes 2020 development plan
The government is holding a special meeting to establish common ground among state agencies about ways to ensure effective implementation of the national development plan for 2020.
— Vientiane Times (paywall)

NA secures funding for human resource development
The National Assembly (NA) has issued a resolution that endorses a government plan to secure a large amount of funding for the education and health sectors, aimed at improving the quality of human resources.
— Vientiane Times (paywall)

Thai Serial Killer Somkid Pumpuang Arrested
A nationwide manhunt in Thailand has come to a close as authorities managed to arrest serial killer Somkid Pumpuang, dubbed the “Jack the Ripper” of Thailand, after he had been identified by an eyewitness who had boarded the same train. Pumpuang is suspected of murdering a 51-year-old woman in Khon Khaen last Sunday.
— The Laotian Times