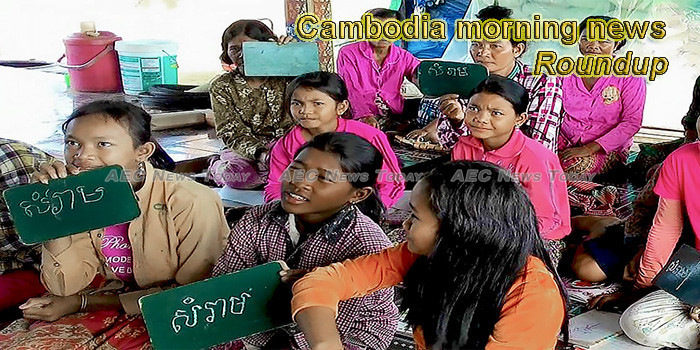 Forest Activists: Government Reluctant to Preserve Cambodia’s Forests
In the letter, they mention how concerned they are about the loss of the last remaining forested areas and the fact that the Cambodia government, they note, “remains reluctant to protect the forest.”
— Themy Themy

Floods forecast for Stung Treng, Kratie and Kampong Cham
Flooding is forecast for the Mekong and Bassac rivers over the next few days, according to the Mekong River Commission (MRC).
— Themy Themy

What’s Next for Kem Sokha and Cambodia’s Opposition?
The anniversary of the Cambodian opposition leader’s detention this week raises questions about his future.
— The Diplomat

Cambodia’s central bank governor hails Vietnamese firms’ contributions
Governor of the National Bank of Cambodia Chea Chanto has praised contributions by Vietnamese enterprises, especially those operating in the banking sector, to promoting the two countries’ prosperity and tightening solidarity between the two peoples.
— Vietnam Plus

Prak Sokhonn to Address the Border Issue with the Laotian Government
The Minister of Foreign Affairs and International Cooperation Prak Sokhonn will lead a delegation to Laos this week during which several issues, including the border situation, will be discussed.
— Themy Themy

Cambodian resort among Time magazine’s greatest destinations
Shinta Mani Wild, an innovative luxury resort and conservation centre, has brought fame to Cambodia after Time magazine, one of the most influential international news publications, included it in its 2019 World’s Greatest Places list.
— Khmer Times

The Post’s exclusive interview with Malaysian Prime Minister Dr Mahathir Mohamad
Mahathir: “Never borrow more than you can repay. It is very important. Don’t spend more than your means and if you have to borrow, make sure you can repay the loan.”
— The Phnom Penh Post

Malaysian PM and Spouse Depart Cambodia after Official Visit (Video inside)
H.E. Dr. Mahathir Mohamad, Prime Minister of Malaysia, has departed Cambodia on Wednesday at 9:20 a.m after concluding an official visit to the Kingdom of Cambodia from 2-4 September 2019, at the invitation of Prime Minister Hun Sen.
— Fresh News

10 Rules students fresh from high school sould know before life in the university
Taing Kimhok is a RUPP lecturer and programme coordinator at IFL, an English Literature specialist. He was a member of IFL debate club and received an Excellence Award as outstanding student from the university.
— Khmer Times

Promoting Sustainable Livelihood of Forest Communities
Forestry Administration has reached a memorandum of understanding with a non-governmental organisation called RECOFTC to further build the capacity of forest communities and promote their livelihood.
— AKP

Visa Announces Plans to Strengthen Payments Security in Support of Cambodia’s Cashless Transformation
Visa, the world’s leader in digital payments, has today launched its Future of Security Roadmap for Cambodia, outlining a robust approach for strengthening payments security in the country over the subsequent years.
— AKP

Ranariddh seen lunching in Phnom Penh
Wearing a green polo shirt and a blue baseball cap, the prince emerged from a black van in a wheelchair at the Sushi Bar restaurant in Niroth shortly after midday, witnesses said. He was accompanied by eight other people.
— Themy Themy

Ministry to hold driving courses for motorcyclists
The Transport Ministry plans to hold training sessions for motorcyclists and has appealed to drivers to attend the lessons on riding techniques and road traffic laws.
— Khmer Times

Shaven Dozen In Sen Sok
A total of 12 alleged thieves appear to have been filmed having their heads shaved by police and Sen Sok district authorities in front of the media.
— CNE

7 Nepalese Sans Passports In Svay Rieng
On September 4, 2019, seven Nepalesenationals were sent to the General Directorate of Immigration Police to take legal action after they were found staying at a guesthouse in Svay Rieng city without correct documents.
— CNE

Former Cambodia Daily Readers, Left Hungry, Shift News Diet
Every afternoon for years, Meas Thon read four pages of the Cambodia Daily. He borrowed a copy of the newspaper’s Khmer-language section from a central Phnom Penh cafe where he still stations his tuk-tuk while waiting for customers.
— VOD

Summer of discontent in Cambodia
CAMBODIA is a hot and humid country located in the tropical region of Southeast Asia. The country has two main seasons: rainy and dry season.
— Khmer Times

NGOs ordered to retract MFI report
The government yesterday ordered two NGOs to retract a critical report on the negative impacts of microloans after summoning their representatives for a meeting to defend their research.
— Khmer Times

Apsara Authority to begin canal construction
The Apsara Authority has announced that it will begin construction of canals surrounding forest areas in Angkor Archeological Park in Siem Reap province this week in a bid to preserve the historical site.
— Khmer Times