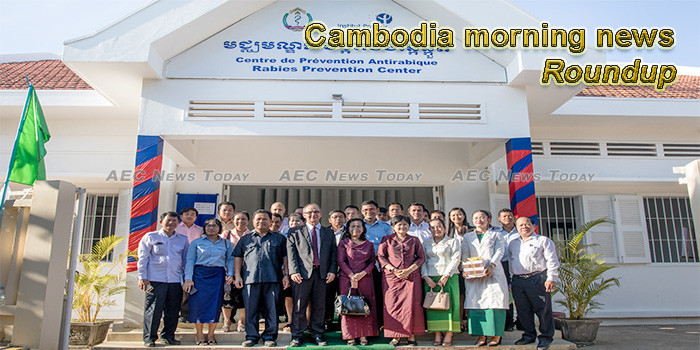 Exports to US rise 30 per cent year-on-year
Cambodian exports to the US increased 29.73 per cent during the first seven months of this year on the same period last year, data from the US Census Bureau shows.
— The Phnom Penh Post

‘Kingdom will not apply for AIIB loan’
Cambodia has expressed no interest in applying for a loan from the Asian Infrastructure Investment Bank (AIIB), even as it announced it will invest another $1.09 billion in six projects in Asean countries.
— The Phnom Penh Post

Kingdom ranked fourth-costliest Southeast Asian country
It may come as a surprise to many, but a global statistics website based in Serbia has ranked Cambodia as one of the most expensive countries to live in Southeast Asia.
— Khmer Times

Kingdom to host 15th Asean environment meeting in October
Cambodia is set to host the 15th Asean Ministerial Meeting on the Environment from October 7-11 in Siem Reap province, with a focus on regional environmental cooperation, a Ministry of Environment Facebook post said on Monday.
— The Phnom Penh Post

Committee formed to manage littering fines
With the annual Pchum Ben celebrations underway and rubbish collection company Cintri workers set to enjoy time off, three ministries have formed a joint committee to be responsible for fines collected for littering.
— The Phnom Penh Post

Cambodian Activists Demand Destruction of Shuttered Chinese Casino
Cambodian environmental activists have called for the demolition of a shuttered Chinese-owned casino accused of polluting an adjacent beach, saying that if the structure is not torn down it will likely be reopened at a later date.
— RFA

Cambodian Constitution Undergoes Eight Amendments
The Constitution of Cambodia, adopted in 1993 and turning 26 years today, is the oldest among the six Cambodian constitutions since 1947.
— AKP

Chinese Media Global Times Cools Down Cambodia Press Figures
If you take a look at the latest online gambling news, you’ll already have some back-story behind this. China demanded from Cambodia the closing down of their online gambling operations, in order to stop illegal activities happening in the country.
— Gambling Herald

Flooding in Siem Reap Province
On the morning of September 24, 2019, some areas in Siem Reap’s Prasat Bakong district were flooded, while the road to Kompong Phluk resort was also flooded.
— CNE

Survey Shows Majority Want Independent Organization To Hold ECCC Archives
The debate over the future of the Extraordinary Chambers in the Courts of Cambodia (ECCC) and if it has been able to deliver justice to the victims of the Khmer Rouge is one that riles up passions among Cambodians, academics, observers and the media.
— VOA

PM Hun Sen: Laws and Government’s Decisions Must Conform to Constitution
This year, 2019, marks the 26th anniversary of the promulgation of the Constitution of Cambodia.
— Fresh News

Sam Rainsy Seeks Help from the International Community to Make his Return a “Chance for Dialogue”
He made his appeal in a letter dated Sept. 17 that was sent to UNHRC President Coly Seck while the organization’s Standing Committee was meeting in Geneva.
— Themy Themy

Firefighters on alert as final days of Pchum Ben near
The Interior Ministry’s Fire Department is warning people to be wary of fires as the end of Pchum Ben approaches, noting that the number of fires across the Kingdom rose by 28 percent this year, including more than double recorded during the holiday thus far.
— Khmer Times

Funcinpec and KNUP discuss merging
The royalist Funcinpec party and Khmer National United Party may merge, after leaders of both parties have met twice to discuss the issue.
— Khmer Times

Ex-Wing CEO to lead fintech arm of leading Phl conglomerate
Former Wing (Cambodia) Limited Specialised Bank CEO Elmer “Jojo” Malolos has been appointed to lead the digital arm of one of the leading business conglomerates in the Philippines.
— Khmer Times

Thai franchises look to get foothold
The president of RCG Retail Cambodia has said franchises from Thailand are looking to expand their businesses in the Kingdom to successes brought by the model.
— Khmer Times

Next 5 Sundays is Movie Night
A TV movie at peak-time on Sunday nights will start this Sept 29 on MYTV. The top youth channel is showing a season of five Khmer movies made by Cambodia’s leading production company, Khmer Mekong Films. Several have won National and International Awards. All come with English subtitles.
— Khmer Times

Cambodia’s exiled former opposition leader calls for uprising
A former Cambodian opposition leader who lives in exile is calling for a people’s uprising, and an army rebellion, against the government.
— Aljazeera

Cambodia Announces Start Of Submissions For National Rice Competition
The search for Cambodia’s best rice grains has started as the Cambodia Rice Federation announced that they are now accepting samples of the product for the upcoming World Best Rice Award Contest.
— Business Times

Hun Sen, Analysts Assert Fragility of Cambodia’s Peace
For Prime Minister Hun Sen, external “harassment” from foreign states is jeopardizing peace in Cambodia and necessitating the suppression of what the government has called a “terrorist” opposition movement.
— VOD

Cambodia’s Lifeline Threatened By Drought from Dams in China
People in Cambodia are grappling with dramatic changes to the country’s ecosystem as China chokes the life out of the Mekong. Meanwhile Prime Minster Hun Sen continues to Cozies up to China and its Money.
— Chiang Rai Times

Rugby in Cambodia rising in popularity
Rugby is a sport that requires grit and toughness – and the Cambodian people have those attributes in abundance. After being slowly re-established over the last three decades, the sport is now flourishing and going from strength to strength.
— The Phnom Penh Post