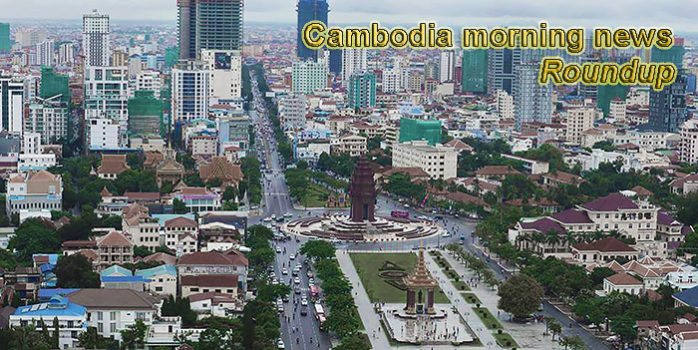 E.U. To Release ‘Everything But Arms’ Investigation Report in November
The European Union is expected to release the findings of its investigation into human rights abuses in Cambodia in November, a move that will determine if the country continues to enjoy the “Everything But Arms” trade preferences, according to a Cambodian labor rights activist.
— VOA

Cambodia Opposition Activist Dies in Fall From Police Motorbike During Arrest
An activist with the banned opposition Cambodia National Rescue Party (CNRP) died Wednesday while being taken into custody by authorities for “plotting a coup” in connection with the return of acting party president Sam Rainsy from exile, according to a family member.
— RFA

Villagers appeal to keep local teacher
One hundred villagers from the Bunong ethnic community in Roya Leu village in the Roya commune in Mondulkiri province’s northern Koh Nhek district have appealed to the provincial Department of Education not to replace a primary teacher at their local school.
— The Phnom Penh Post

PM urges youths to apply for jobs at career fair
Prime Minister Hun Sen yesterday urged youths to prepare their curriculum vitae and participate in the National Career and Productivity Fair where thousands of jobs will be on offer over the weekend.
— Khmer Times

Loss of Land, Forests Threatens Indigenous Food Security, Conference Told
Indigenous people from around Cambodia gathered at a conference in Phnom Penh on Tuesday saying the loss of land and forests was threatening their livelihoods and food security.
— VOD

Family joins desperate search for Brit tourist in Cambodia
The family of a 21-year-old British tourist who went missing on a Cambodian island a week ago boarded boats with authorities Wednesday to continue a meticulous search around the waters and dense jungle territory.
— Yahoo News

Authorities in Cambodia Fear Briton Amelia Bambridge Has Drowned
Amelia Bambridge set off on her trip on 27 September, when she flew to Vietnam, her family said. Her father, Phil Bambridge, who has travelled to the island, said on Tuesday that he believes she has been “abducted”.
— Chiang Rai Times

Cambodia desperately needs life-saving stroke treatment
According to the Centres for Disease Control and Prevention, strokes are the number one cause of death in Cambodia, claiming 153.9 lives per 100,000 people in 2017.
— The Phnom Penh Post

Rainsy ‘plot’ suspects told to join 143 and confess
A spokesperson for the Ministry of Justice has called on those arrested for involvement in Sam Rainsy’s “coup plot” to cooperate with investigating judges. So far, 143 others have absolved themselves of criminal charges by doing so.
— The Phnom Penh Post

Nov 9 Will Be Rainsy’s ‘Final Day,’ CPP Spokesman Says
As opposition leader Sam Rainsy vowed to put his freedom and life on the line in his attempt to return to Cambodia on November 9, the ruling party said on Tuesday that the day would mark his “final day.”
— VOD

Senior Monk Samdech Luas Lay Dies at 106
In its statement, the Sangha Board said that Samdech Preah Dhama Likhet Luas Lay, who was first vice chief of the Sangha Nayaka Board and chief of the Thera Sabha Sangha died at 3:30 pm on Tuesday at the Sansamkosal Pagoda of which he was the abbot. The statement said that the cause of death was old age.
— Themy Themy

Kingdom-VN forces ink accord
Lieutenant General Hun Manet, the commander of the infantry of the Royal Cambodian Armed Forces (RCAF), and the chief of the Vietnamese defence forces have agreed to strengthen ties and cooperate further in managing and defending the border.
— The Phnom Penh Post

Thousands of visitors expected at leather expo
As many as 20,000 local and international visitors are expected to visit Koh Pich (Diamond Island) next month for one of the biggest leather and footwear industry trade shows ever hosted by the Kingdom.
— Khmer Times

Police question dozens as hope fades for Bambridge’s rescue
Six more people were summoned by police yesterday to be questioned as part of their investigation into the case of Amelia Bambridge, who has yet to be found as hope dwindles for her safe rescue following her mysterious disappearance after partying on Police Beach on Thursday.
— Khmer Times