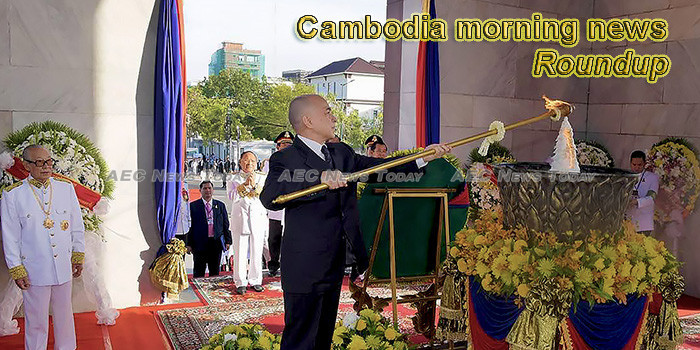 Cyprus strips citizenships after uproar over passports following a Reuters investigation
Yesterday a Reuters report revealed that Cyprus had started a process to strip 26 individuals of citizenship they received under a secretive passports-for-investment scheme, admitting it had flaws.
— Reuters

Cambodian Opposition Leader Stopped from Returning Home
Cambodia’s most prominent opposition leader, Sam Rainsy, was stopped from boarding a flight in Paris on Thursday in his attempt to return home to challenge his country’s longtime autocratic leader, but he assured his followers he will go ahead with his plan.
— VOA

PM Hun Sen Calls on Confession from Those Conspire to Commit Treason (Video inside)
Cambodia’s Prime Minister Hun Sen has called on people who have conspired to commit treason to confess in order to be pardoned.
— Fresh News

Nation’s first wind energy project on the table
Singapore-based The Blue Circle Pte Ltd will hold talks with the government this month to discuss plans to build a wind park in Kampot province, according to a high-ranking energy official.
— Khmer Times

ASEAN states urged to resist Cambodia’s demands to arrest dissenters
Mu Sochua (Reuters)Activists and lawmakers in Southeast Asia are urging ASEAN governments to resist pressure from Phnom Penh to arrest dissidents who enter their territories, as a dismantled Cambodian opposition plans a perilous return to its homeland this weekend after years in political exile.
— The Jakarta Post

Hun Sen tells Cambodians not to worry on 9 November
Cambodia will mark the Independence Day on Saturday, November 9, which will be followed by a three-day Water Festival celebration. November 9 is also the date Mr. Sam Rainsy, vice-president of the now dissolved opposition Cambodia National Rescue Party (CNRP), has chosen for his return from exile.
— Themy Themy

Facing Arrest, Cambodia’s Sam Rainsy Will Get Home Come What May
Self-exiled Cambodian opposition party founder Sam Rainsy said on Wednesday he would not be deterred by efforts to prevent his return home “to be with my people.”
— VOA

Cambodia Requests Indonesia to Arrest a Fugitive Politician
The Royal Embassy of the Kingdom of Cambodia in Indonesia is requesting Indonesian authorities to arrest a fugitive exiled politician, Mrs. Mu Sochua, as she is in Jakarta, Indonesia.
— AKP

Cambodian troops deployed as exiled opposition leaders plan Thai border crossing
The high-stakes return to Cambodia has been labelled a terrorist coup plot by the government of Prime Minister Hun Sen, a former Khmer Rouge soldier who has been in power for more than 34 years.
— ABC News

Mu Sochua Released From Detention in Malaysia
CNRP vice-president Mu Sochua confirmed on Thursday evening that she has been released from detention at Kuala Lumpur International Airport.
— VOD

Cambodia-US trade up 37 pct in first nine months
Two-way trade between Cambodia and the United States reached $4.3 billion in the first nine months of 2019, an increase of 37 percent compared with the same period last year, the latest data from the US government shows.
— Khmer Times

PM Hun Sen Thanks ASEAN Member Countries for Cooperation against Traitors (Video inside)
Cambodian Prime Minister Hun Sen, on Thursday morning, thanked the Government of Thailand, Indonesia, and all ASEAN countries for their good cooperation against any rebels and traitors to enter their countries as requested by Cambodia.
— Fresh News

Foreign Tourists Visiting Cambodia Increase 10 Percent
Foreign tourists visiting the Kingdom of Cambodia increased by 10 percent to 4.8 million in the first nine months of this year, as Chinese tourists continue to top the list of international tourist arrivals.
— AKP

Cambodia To Mark 66th Independence Day This Weekend
Cambodia is going to celebrate the 66th anniversary of national independence from France on Nov. 9 (1953-2019), under the royal presidency of His Majesty King Norodom Sihamoni.
— AKP

Southeast Asia-wide Photo Contest on Youth Agripreneurs Open to Cambodians until Nov. 30
Cambodian photographers, both amateurs and professionals across all ages, have until Nov. 30, 2019 to beat the submission deadline for the Southeast Asian Regional Centre for Graduate Study and Research in Agriculture (SEARCA) Photo Contest 2019, said the centre in a press release.
— AKP

Cambodia to Protect Peace at All Cost: Hun Sen Tells Foreign Friends (Video inside)
Cambodian Prime Minister Hun Sen reiterated the commitment to protecting the kingdom’s peace and ensuring the livings of people at any cost.
— Fresh News

Newbill meets Chamroeun
US embassy Deputy Chief of Mission Michael Newbill met with Preah Sihanouk provincial governor Kuoch Chamroeun on Wednesday to strengthen cooperation as the US wants to bring investors to the province.
— The Phnom Penh Post

Malaysia urged to release Sochua ‘without condition’
Malaysia has been urged to release Mu Sochua, the vice-president of the Supreme Court-dissolved Cambodia National Rescue Party, following her detention at Kuala Lumpur’s international airport on Wednesday night upon leaving the Indonesian capital Jakarta.
— The Phnom Penh Post

Water Fest truck ban announced for capital
The Phnom Penh Municipal Hall announced a ban on heavy goods vehicles and concrete trucks, and restrictions on buses and tuk-tuks entering the capital for five days over the Water Festival period from Saturday until the end of next Wednesday.
— The Phnom Penh Post

Insurance industry sees strong growth
The fledgling insurance industry in the Kingdom continues to undergo remarkable growth, with premiums growing by more than 14 percent in the first half of the year, according to insiders.
— Khmer Times

Anniversary of the fall of Berlin Wall held in Cambodia
The embassy’s gate has been occupied by a mural depicting nine columns on one door panel and 11 on another, symbolizing the date the wall that had divided Germany during the cold war came down – the 9th of November 1989.
— Themy Themy