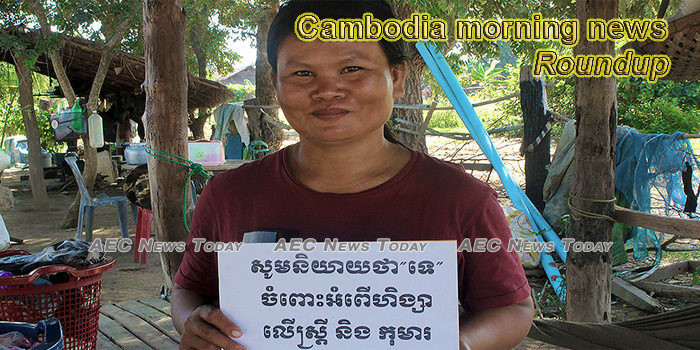 In reversal, Cambodia’s Hun Sen offers U.S. new ‘bond of friendship’
Cambodia’s authoritarian leader Hun Sen has offered to renew friendship with the United States after receiving a letter from President Donald Trump, a turnaround in relations with the country he once accused of conspiring to overthrow him.
— Yahoo News

Skills or jobs: Which should Cambodia focus on?
Cambodia boasts one of the lowest unemployment rates in Southeast Asia. According to research platform for investors, Macrotrends, this number stood at 1.05 percent in 2018, putting its unemployment rate only higher than Thailand’s (0.67 percent) and Lao PDR’s (0.61 percent) when compared to other ASEAN countries.
— The Asean Post

World Bank: Growth at 7% for this year
Cambodia’s economy remained robust, underpinned by solid export performance and strong domestic demand, even as real growth is expected to decelerate to 7.0 per cent this year from 7.5 per cent last year, the latest World Bank Cambodia Economic Update said on Wednesday.
— The Phonm Penh Post

Labor Unionists Decry Lack of Consultation on Union Law Amendments
Worker unions criticized the National Assembly’s passing of 10 amendments to the contentious Trade Union Law on Tuesday, saying they were not aware of the exact nature of the amendments passed by parliament.
— VOA

Dengue, malaria eradication eyed in Prey Lang area
The Ministry of Environment is committed to eliminating malaria and other vector-borne diseases from the natural protected area in Prey Lang Wildlife Sanctuary by 2025. This is in line with the National Strategic Plan for Elimination of Malaria 2011-2025.
— The Phnom Penh Post

Nuon Chea’s Genocide Conviction Stands, but ‘Final Judgement’ Left Unsaid
Khmer Rouge second-in-command Nuon Chea’s genocide conviction will stand following his death nearly four months ago, but a “final judgement” on his guilt or innocence could not be handed down since his demise ended the appeal process, the tribunal that convicted him has said.
— VOD

Development Partners Remind Laos of the Regional Effects of its Hydropower Projects
In a statement issued Tuesday during the 26th Council Meeting of the Mekong River Commission (MRC) held this week in Phnom Penh, they said: “We encourage the Government of Lao PDR to actively work with the MRC secretariat and other member countries, as well as the dam developer, to avoid or mitigate any harmful effects from the project.”
— Themy Themy

Kampot tourist boats to move to east side of river
The Kampot provincial authority on Tuesday set a 20-day deadline for the owners of 19 tourist boats to relocate from the east to the west side of the Praek Tuek Chhu river in order to preserve the town’s natural beauty and ensure the safety of visitors to Kampot.
— The Phnom Penh Post

Sustainable development discussed at urban forum
The Ministry of Land Management, Urban Planning and Construction, in cooperation with UN Cambodia, held the Cambodia Urban Forum for the first time on Wednesday to identify priorities towards smart, sustainable and inclusive urban development in Cambodia.
— The Phnom Penh Post

Americans Connect with their Cambodian Heritage Through the Arts
This is how Kaylee Rivera, the 19 year-old youth coordinator of Mekong NYC—a South East Asian social-justice NGO in New York City—described how she felt at the Arts4Peace festival earlier this month.
— Themy Themy

Prison Department dismisses Licadho’s prison report
Interior Ministry’s General Department of Prisons has denied the report made by right group Licadho which claimed there are violations of basic human rights in the Kingdom’s prisons.
— Khmer Times

Hun Sen Wants to Nourish ‘Beautiful Chapters’ With Trump
Cambodia and the U.S. have been through “ups and downs” together, but their bonds of friendship can still be renewed, Prime Minister Hun Sen wrote in a letter to U.S. President Donald Trump.
— VOD

Cambodia’s Hun Sen Thanks US President Trump For His ‘Understanding, Patience’
Cambodian Prime Minister Hun Sen thanked U.S. President Donald Trump on Tuesday for his “understanding and patience” in not seeking regime change in the autocratic Southeast Asian nation, saying Cambodia needs stability in the country in order to develop.
— RFA

Youth Activist Kong Raiya’s Bail Decision Delayed
Youth activist Kong Raiya was present in a Phnom Penh court on Tuesday for a bail hearing, with the investigating judge postponing the decision to later this week.
— VOA

State Department Recognizes Foreign Service Spouse in Cambodia
The State Department announced the winners of a volunteerism award last weekend, with Jennifer Yan, whose partner worked at the U.S. Embassy in Phnom Penh, winning recognition for her work with local charities in Cambodia.
— VOA

Government creates department to improve seed quality for better yields
The government is establishing a department under the Agriculture Ministry which will be responsible for improving the quality of seeds and distributing them more efficiently to farmers.
— Khmer Times

Tuol Kork special needs teachers resign
Two Tuol Kork Primary School teachers who taught students with special needs tendered their resignation, citing low salaries and not being recognised by the Ministry of Education, Youth and Sport as the reasons.
— The Phnom Penh Post

Kingdom in talks with Russia for nuclear science
Cambodian and Russian experts yesterday concluded discussions on the possibility of constructing and establishing a Nuclear Science and Technology Centre in the Kingdom.
— Khmer Times

King Praises PM Hun Sen’s Leadership in Promoting the Livings of Disabled Cambodians
Cambodian King Norodom Sihamoni praised the leadership of Prime Minister Hun Sen for improving the lives of people with disabilities, according to the royal message released at the official launch of the National Disability Strategic Plan (NDSP) 2019-2023 on Wednesday.
— Fresh News

Chinese Camper Convoy Comes To Cambodia
A camper van convoy traveling from China arrived in Phnom Penh on the evening of Nov. 26 with a total of 20 vehicles.
— CNE

Water Warning In Kratie, Gold Mine Chemical Leak Blamed
Local authorities in Kbal Domrei commune, Sambor district, have ordered residents near a gold mine in the village of O’Run, to stay away from water after dead fish were found floating on November 25th.
— CNE

Kampot River Boats Must Move Before Festival
Kampot: The Kampot provincial government will relocate boats mppred on the eastern banks of the Kampot river across to the west for reasons of aesthetics. The move will be completed before the Sea Festival next month.
— CNE

K Kong protest ends after release of security guard
Some 100 villagers who protested on Monday and Tuesday outside the Koh Kong provincial court to seek the release of village security guard Tith Sitha have stopped doing so after provincial administrative officials promised to release him on bail for “threatening to kill” a provincial deputy governor.
— The Phnom Penh Post

Kandal man charged after officials uncover dismembered wife
Khuth Sophal, 46, has been put in custody after he was charged on Tuesday for the murder of his wife Yath Srey Pov, 45. The killing took place last week in Ponhea Leu district’s Tomnup Thom commune, said the Kandal provincial court.
— The Phnom Penh Post

Parties urged to resolve dispute over construction disturbance
After a complaint from 20 families in mid-November, Chamkarmon district authorities on Wednesday called on parties involved in a construction dispute to find a solution.
— The Phnom Penh Post

ECCC starts hearing on trying KR’s Meas Muth
The Pre-Trial Chamber of the Extraordinary Chambers in the Courts of Cambodia (ECCC) on Wednesday opened a three-day hearing in Case 003 against Khmer Rouge naval commander Meas Muth on whether to prosecute him.
— The Phnom Penh Post

What to expect from youth in politics
Recently, we have seen the approval from Prime Minister Hun Sen to the US president’s proposal to form a working group in the US Department of State to find a solution for the political deadlock in Cambodia.
— Khmer Times

This week’s Cambodia morning news feature photo focus on International Day for the Elimination of Violence against Women, November 25.