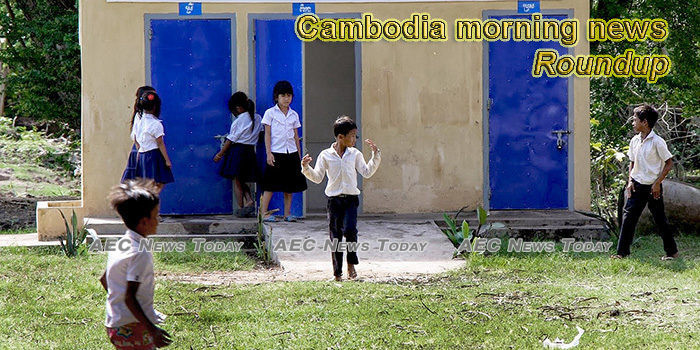 Cambodian Leader Willing to Lose EU Trade Privileges
Cambodian Prime Minister Hun Sen says it is more important for his country to maintain its independence and sovereignty than to retain special trading privileges that the European Union has threatened to withdraw.
— The New York Times

PM Hun Sen: Never Trade Sovereignty with Aids; Cambodia Still Survives without EBA (Video inside)
Cambodian Prime Minister Hun Sen reiterated that Cambodia does not want Everything But Arms (EBA) withdrawn, yet she cannot trade national sovereignty with any assistances or preferential tariffs, addressing Thursday at the inauguration of a new building at the Royal Academy of Cambodia.
— Fresh News

Chinese businesses seeking to improve environmental investments in Cambodia
Yesterday morning saw Lu Xinhua, chairman of the Council for Promoting South-South Cooperation and former Chinese Vice Foreign Minister, lead a delegation of 25 Chinese businesses to the Cambodian Chamber of Commerce in the hope of exploring further economic and investment opportunities between the nations.
— Khmer Times

UNDP says sustaining natural resources vital for Cambodia’s progress
Cambodia’s rapid development over the past 30 years has led it to rank in the top 10 globally, and second in Asia and the Pacific, on the “rate of improvement” in the Human Development Index, said a new report released here by the United Nations Development Programme (UNDP) on Thursday.
— Xinhua

UNDP report: Rural communities key to future of Cambodia’s forests
But more importantly, in the communities that depend on them.
— Themy Themy

Is the Dog-Meat Trade Growing in Cambodia?
However, “In Cambodia, it tends to be the opposite,” she said. A 2019 report by Four Paws International and ARC revealed that an estimated 2,900 dogs per month, that is, 34,800 per year, are served at restaurants in Siem Reap City alone.
— Themy Themy

A Scientist Speaks of the Never-Ending Fight Against Disease-Carrying Mosquitoes
Since insecticides were first developed during the First World War in the 1910s, he said, “every time we created a new insecticide, five years later mosquitos became resistant to it.”
— Themy Thmey

‘No Exceptions’ for Illegal Constructions, but Some Problems Remain: Official
Illegal construction will not be tolerated by authorities in Preah Sihanouk province, but a small percentage of problems related to new construction — which has boomed in the coastal province in recent years — could not be helped, a provincial official said.
— VOD

Planned Private Prison Transferred to Government Control
A new prison building that was to have been reserved for rich inmates willing to pay to be detained in relative comfort has been put under government control, the Interior Ministry’s prisons department spokesman said.
— VOD

Direct sales of yellow banana to China see exports grow
Yellow banana exports to China have grown since April when the Ministry of Agriculture, Forestry and Fisheries announced that the fruit can be exported directly without relying on Vietnam as an intermediary, Longmate Agriculture Co Ltd director Hun Lak said on Wednesday.
— The Phnom Penh Post

Drought to grip Kingdom until new year
The Mekong River Commission (MRC) has warned that severe to extreme droughts are forecast to last until January for countries in the lower Mekong basin.
— The Phnom Penh Post

PM Hun Sen: Only Cambodia Survives after Foreign-backed Forces Withdrawn
No countries in the world but only Cambodia survives after the withdrawals of foreign-backed forces, Cambodian Prime Minister Hun Sen addressed Thursday at the inauguration of a new building at the Royal Academy of Cambodia.
— Fresh News

Modernisation in IT system increases GDT’s tax collection
Modernizing the tax system through automation has helped increase revenue and transparency in the Kingdom’s tax sector.
— The Phnom Penh Post

Celebrating 30 years of UN children’s rights convention
Childred, dignitaries and major stakeholders on Wednesday met at Factory Phnom Penh to celebrate the 30th anniversary of the UN Convention on the Rights of the Child (CRC) and launch the three-month #everyright4everychild campaign that aims to strengthen and protect the rights of every child.
— The Phnom Penh Post

Koica planning to lend support in mine clearing
The Korea International Cooperation Agency (Koica) said on Wednesday it has embarked on a feasibility study – Project of Mine Action for Human Development Programme in Cambodia – to advance community development in villages that have been deemed mine-free.
— The Phnom Penh Post

Immigration detains foreigners in Poipet for online gambling
A total of 209 people, including 12 Cambodians, were detained for illegal online gambling on Tuesday in Poipet town’s Poipet commune in Banteay Meanchey province.
— The Phnom Penh Post

Another Safe Cracking Case
On the morning of November 21, 2019, a theft was discovered in a factory in Toul Leng village, Taingdong commune, Bati district.
— CNE

Nuisance Chinese Man Detained In Chroy Changva
On November 21, 2019 at 16:00, the Bureau of Immigration and Customs Enforcement of the Phnom Penh Municipal Police Office received one foreigner, WU YAO, a 33-year-old Chinese national, from the police force of Chroy Changva administration.
— CNE

Ministry of Foreign Affairs Confirms PM’s Visit to Korea Next Week
Samdech Akka Moha Sena Padei Techo Hun Sen, Prime Minister of the Kingdom of Cambodia will lead a high delegation to the Republic of Korea (ROK) to attend the ASEAN-ROK Commemorative Summit and the First Mekong-ROK Summit in Busan, from Nov. 24-27, 2019.
— AKP

DPM Tea Banh: ADMM Retreat, ADMM-Plus Focus on Regional Peace and Stability
The ASEAN Defence Ministers’ Meeting Retreat (ADMM Retreat) and the 6th ADMM-Plus in Thailand mainly focused on the fight against terrorism and the maintenance of peace and stability in the region.
— AKP

Goddess of Flower’s last dance
THIS is a momentous week, as the people of Cambodia mourn for Princess Norodom Buppha Devi who passed away at the age of 76 in a hospital on Nov 18. Her demise is a big loss to the Kingdom and its classical art scene.
— Khmer Times