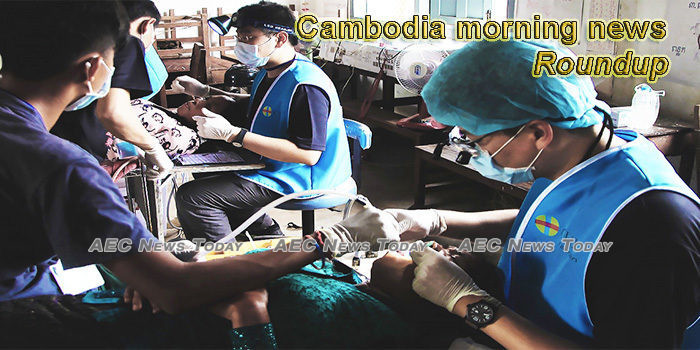 Human Rights Day Event to Push Politics-Free Activism, Official Says
The U.N. and government are partnering to promote youth activism in line with the law, not politics, for a Human Rights Day celebration, the governmental Human Rights Committee spokesman said on Thursday.
— VOD

Cambodia-Eurasian Economic Union Launch Report on Feasibility Study on Free Trade Agreement
The report on the ‘Feasibility Study on the FTA between Kingdom of Cambodia and Eurasian Economic Union’ was launched by Minister of Commerce, HE Pan Sorasak and Professor Nishimura, president of Economic Research Institute for ASEAN and East Asia (ERIA) on 4 December at Ministry of Commerce, Phnom Penh, Cambodia.
— Fresh News

ADB Approves $119m Irrigation Scheme
The Asian Development Bank (ADB) has approved a $119.16 million financing package to help modernize and improve the climate and disaster resilience of irrigation systems in four provinces in Cambodia, which will help supply water to 43,500 hectares (ha) of farm land benefiting 290,000 people, half of whom women.
— CNE

Cambodian Government Revokes Passports of 27 CNRP Members
Cambodia’s Ministry of Foreign Affairs has revoked the passports of 27 members of the outlawed opposition Cambodia National Rescue Party (CNRP) who have fled the country to avoid a government crackdown, accusing the activists of involvement in a plot to topple Prime Minister Hun Sen.
— RFA

S Leone potential new market for export of Cambodian milled rice
Sierra Leone plans to import milled rice from Cambodia for domestic consumption. The request was made when the visiting Sierra Leone Ambassador to China Ernest Ndomahina met Cambodian Minister of Commerce Pan Sorasak on Wednesday at the ministry.
— The Phnom Penh Post

Cambodia’s political outlook for 2020: Constant, robust reform on the agenda
The failure of Sam Rainsy’s plan to overthrow the government via what he calls a “populist uprising” creates a new turning point in Cambodian politics. A new political chapter is unfolding, with a brighter future. The political outlook is rosy in 2020.
— Khmer Times

Hard Work Put to Promote Welfare of People with Disabilities
The Royal Government of Cambodia is working hard in enhancing welfare, rights and living condition of Cambodian people with disabilities.
— AKP

An Art Exhibition at Bophana Center Addresses Violence against Women
The photo exhibition, which also include the work of artists Khuon Viseth and To Malinda, was to be about gender-based violence. And this soon turned personal for Linda.
— Thmey Thmey

Construction Expo Attracts 207 Companies
The Cambodia International Construction Industry Expo from Dec. 5 to 7 will attract 207 companies to showcase their products and services.
— AKP

Cambodia Encourages Investment in New Technology
Royal Government of Cambodia welcomes investment to leverage technologies in the Kingdom, according to telecommunication minister.
— AKP

Japan Travel Fair to Be Held This Weekend
The Japan National Tourism Organisation will organise the Japan Travel Fair in cooperation with the
Embassy of Japan in Cambodia this weekend.
— AKP

Transport Minister calls for better bus service to ease city’s congestion
Sun Chanthol, Minister of Public Works and Transport, said that creation of dedicated bus lanes on the city roads and promotion of timely bus schedules and frequency are also crucial for gaining trust from members of the public.
— Thmey Thmey

Woman loses bike to robbers on the way to work in capital Penh
Kambol district police are searching for a group of five men who robbed a garment worker and took her motorbike on Wednesday in Taphem village, Kambol commune, in the capital’s Kambol district.
— The Phnom Penh Post

Seized materials from forest crimes to be auctioned off
General Sao Sokha, the commander of the National Military Police and chair of the National Committee for Prevention and Crackdown of Natural Resources Crime, told municipal and provincial governors to maintain the quality and quantity of materials and equipment seized from forest crimes so that they can be put for bidding.
— The Phnom Penh Post

Contractual officials set to receive salary increases
Prime Minister Hun Sen has raised the monthly salaries of contractual officials who work at the national and sub-national level in ministries and institutions, effective from January 1, next year, by 20,000 riel ($5) – from 650,000 riel to 670,000 riel.
— The Phnom Penh Post

Nat’l plan to strengthen gov’t anti-drug campaign
The National Strategic Development Plan 2019-2023 directs the authorities and relevant institutions to carry out effective prevention, crackdown and resolution of drug issues, and all commune authorities to be confident in dealing with drug problems in their areas.
— The Phnom Penh Post

Focus on youth as gov’t, UN to mark Human Rights Day
The government and UN Cambodia are to celebrate the 71st International Human Rights Day, with both attaching great significance to youth leadership roles in society.
— The Phnom Penh Post

Seized timber to be kept for auction
The National Committee for Forest Crime Prevention on Wednesday ordered Phnom Penh and provincial governors to halt destroying timber seized during crackdowns on illegal logging and keep it for auction.
— Khmer Times

Ministry pushes motorists to utilise QR code licence plates
The Transport Ministry is encouraging drivers to replace their old licence plates with ones displaying QR codes in a bid to curb the use of fake plates in the Kingdom.
— Khmer Times