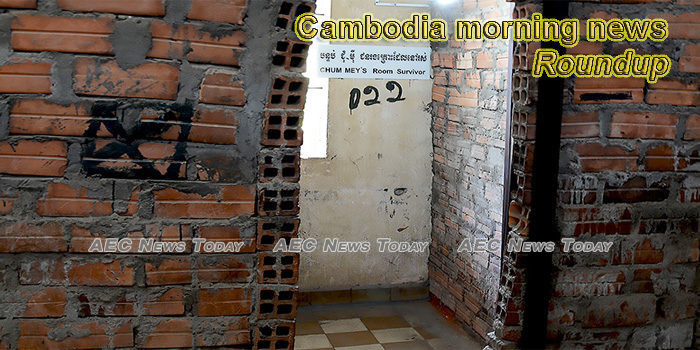 ARB terminates MoU for Cambodian market entry
ARB Bhd has terminated a Memorandum of Understanding (MoU) that was aimed at facilitating the group’s foray into Cambodia to implement the enterprise resource planning (ERP) system and solutions there.
— The Edge Markets

Ministry files NGO freedom report as part of EBA review
The Ministry of Interior has submitted a report on the state of NGOs to the Foreign Affairs Ministry ahead of the latter’s imminent response to the European Union’s concerns over rights and freedom in the country in relation to the possible withdrawal of the Kingdom’s Everything-but-arms trade status.
— Khmer Times

Gov’t adds $50 million to rice fund
The Cambodia Rice Federation, together with millers and exporters, has hailed a recent government move to allocate an additional $50 million to rescue the rice sector and stabilise the price of premium varieties.
— Khmer Times

Civil Society Advocates Decry End Of Human Rights Day Holiday
In 2014, the week leading up to International Human Rights Day, grassroots communities and rights advocates were abuzz organizing events across Cambodia to mark the December 10 holiday. The event brought with it a festive atmosphere sprinkled with cautious optimism.
— VOA

LOLC says 2019 is ‘the year of digital services’
LOLC Cambodia, a microfinance deposit-taking institution, has increased its loan portfolio by 28 percent in 2019, reaching $625 million, according to its latest quarterly report.
— Khmer Times

Expressway construction continuing as planned: Ministry
Construction of the country’s first expressway, connecting Phnom Penh and Sihanoukville on the coast, is 7 percent complete almost a year after the groundbreaking.
— Khmer Times

Mine, UXO casualties up 40 percent
The Cambodian Mine Action Authority has reported that casualties increased this year by more than 40 percent when compared with the same period last year.
— Khmer Times

Cambodia Holds Bird Festival and Nature Expo
The Ministry of Environment in collaboration with other stakeholders organised an event to raise people’s awareness on nature and bird life in the country.
— AKP

Vietnamese Defense Paper Warns of “Interference” in Its Relations with Cambodia
Vietnam has raised concerns about “interference” and “division” in its bilateral ties with Cambodia in the recently released “Defense White Paper 2019”, with observers saying it was likely referring to Phnom Penh’s growing proximity to Beijing.
— VOA

Cruise ship to connect Mekong Delta with Cambodia
The four-star Victoria Mekong cruise ship is set to start carrying tourists on a route between Vietnam’s Can Tho City and Cambodia’s capital of Phnom Penh on December 11, Thien Minh Group said recently.
— VoV

A Glimmer of Hope for Online News in Cambodia
Minutes before a recent show, “VOD Roundtable” host Lim Thida readied notes and warmed up the day’s guests. Control room staffers prepped to go live with all the trappings of the kind of on-air radio broadcast that, until a few years ago, was typical for the longtime Voice of Democracy program.
— VOA

Cambodia, Japan bilateral trade reaches $1.9B in first 10 months
Bilateral trade between Cambodia and Japan reached $1.9 billion, in the first 10 months of the year – a slight increase of 0.44 per cent compared to the same period last year, data from the Japan External Trade Organisation (Jetro) showed.
— The Phnom Penh Post

Bike trail being built around Angkor Park
The Apsara Authority is constructing a 23-kilometre bicycle trail around the Angkor Archaeological Park to provide safety for cyclists and help reduce traffic congestion on main roads.
— Khmer Times

Thong Khon sees flights between Osaka and Siem Reap
He made his remarks at a travel fair organised by the Japan National Tourism Organization and the Embassy of Japan at AEON Mall in Sen Sok City over the weekend.
— Thmey Thmey

CHRC seeks to end LGBT discrimination
The Cambodian Human Rights Committee president spoke during a pro-LGBT event in Phnom Penh on Saturday and called on the public to end discrimination and prevent violence against the community.
— Khmer Times

Forest fire season sparks warning
The Environment Ministry has issued guidelines to all provincial departments and local authorities to aid in the prevention of forest fires during the dry season.
— Khmer Times

Phnom Penh-Sihanoukville Expressway Construction Project Achieved by Over 7 Percent
The construction project of an expressway from Phnom Penh capital to Sihanoukville of Preah Sihanouk province has been achieved by 7.3 percent as of November 2019.
— AKP

Labour ministry to check provision of seniority payments
The Ministry of Labour and Vocational Training is preparing to send officials to check on whether the second phase of seniority payments will be provided to garment factory workers at the end of the year, said ministry spokesman Heng Sour.
— The Phnom Penh Post

Court orders Sokha to stand trial on January 15 for treason
The Phnom Penh Municipal Court has set January 15 as the trial date for Kem Sokha, the former president of the Supreme Court-dissolved Cambodia National Rescue Party (CNRP) who is under court-supervised bail on a treason charge.
— The Phnom Penh Post

Hundreds in B Meanchey survive snake bites
The Banteay Meanchey provincial Department of Health said this year had seen more than 300 people saved from snake bites after seeking timely treatment from state hospitals across the province.
— The Phnom Penh Post

Vans loaded with timber seized in Kratie province
Kratie provincial military police have seized two vans full of illegal timber and are seeking to identify the source of the timber and those behind its transportation.
— Khmer Times

Campaign against ongoing domestic violence concludes
A 16-day campaign to battle violence against women and girls comes to a close today.
— Khmer Times

This week’s Cambodia morning news feature photo focuses on  International Day of Commemoration and Dignity of the Victims of the Crime of Genocide and of the Prevention of this Crime, December 9.