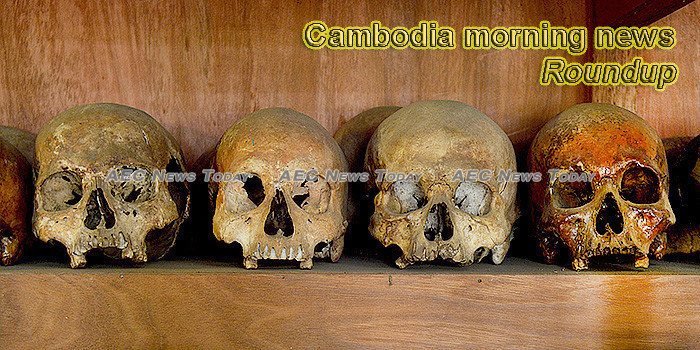 Slap down for media freedom on the streets of Phnom Penh (video)
The assault of a Cambodian reporter at an early morning motor vehicle crash by a police deputy inspector has seen media freedom and abuse of power in Cambodia thrust into the spotlight at the worst possible time.
— AEC News Today

Water of Mekong River May Hit Alarming Levels
Mekong River passing through some provinces of Cambodia may rise to alarming levels if affected by the happening 12th storm called “Podul” moving to South China Sea.
— AKP

Foreigners Banned from Specific Jobs in the Country
According to the prakas issued by the Ministry of Labor and Vocational Training, people who are not Cambodian citizens will be barred from doing 10 specific jobs including selling any type of product on the street or in any public areas, selling Cambodian souvenirs or Khmer traditional music instruments, working as barbers or driving any vehicle.
— Themy Themy

Cambodia Explores Possibility to Enhance Value Chain of Agricultural Products
Enhancement of value chain and creation of added value in agricultural product exports are crucial and a priority for national economic growth and industrial development of Cambodia.
— AKP

Safe sites improvement
In Cambodia, flood is by far the most common type of disaster. Almost all districts including the city are vulnerable to flash flood and high water level during rainy season.
— Relief Web

Hun Sen reviews Supreme Council’s year-long work
Prime Minister Hun Sen and representatives from more than 10 political parties on Wednesday met with the Supreme Council for Consultation and Recommendations to review the body’s work after one-year of operation.
— The Phnom Penh Post

Chinese Embassy in Cambodia Releases Guidelines for Chinese Tourists to Understand the Kingdom’s Culture and Traditions
The Chinese Embassy in Cambodia today released a guidelines “Compass for Chinese People to Cambodia”, aimed at attracting more Chinese tourists to the kingdom and teaching the tourists to understand and respect the culture, customs and traditions of Cambodia.
— Fresh News

Traffic Jams On Road 4 After Fuel Spill
Preah Sihanouk: At 7:30 in the morning of August 28, 2019, there was a collision between a PTT fuel tanker truck and another truck at Mao Pich Nil between km 103-104. Fuel was spilled over the road.
— CNE

Minor Parties to ACU: Use ‘Sharper Nail’ to Reveal Court Corruption
A government advisory body has urged the Anti-Corruption Unit (ACU) to more effectively combat corruption in the judicial system, with some calling for a “sharper nail” to peel back layers of collusion in the courts.
— VOD

Former RFA Reporters Hope For An Acquittal – And A Return to Journalism
While the Cambodian government appointed several dozen journalists to be advisors to the Ministry of Information, two of their peers – former Radio Free Asia reporters Uon Chhin and Yeang Sothearin – were facing trial in a Phnom Penh courtroom, after the same government accused them of espionage.
— VOA

Cambodia boasts widespread 4G but slow speeds
Focusing on 4G availability has rocketed Cambodia into the top half of Opensignal’s global rankings for this metric – but at the cost of 4G speeds.
— Developing Telecoms

Young filmmakers train a fresh lens on turbulent Cambodia
When Kavich Neang learned that Cambodian authorities were going to knock down the storied apartment building where he’d been raised and replace it with luxury condos, the young filmmaker’s first thought was to grab a video camera.
— Rich Times- Dispatch

Labour Minister’s Tips for 33 Cambodian Youths to Join SSEAYP 2019
Minister of Labour has advised 33 Cambodian youths selected for the Ship for Southeast Asian and Japan Youth Programme (SSEAYP) to actively learn and act as Cambodian ambassadors to promote the Kingdom’s culture and development during the mission.
— AKP

Cambodian locations identified as child-sex tourism hotspots
The National Committee for Counter-Trafficking has identified the capital and three provinces as locations where children are the most vulnerable to attacks from paedophiles entering the Kingdom as tourists.
— Khmer Times

If You Do Not Help Row the Boat, Do Not Stop the Boat: Defense Minister Talks to the Dissolved-CNRP
Cambodian Defense Minister Tea Banh warned the court-dissolved opposition group to stop their attempt in destroying Cambodia’s peace and development.
— Fresh News

Clogged City: Sihanoukville Floods Linked to Infrastructure Woes
Him Mao moved into his new house in the seaside city of Sihanoukville just a day before water flooded in. Mao, his wife and their son were sleeping when they heard a yell just before midnight from the builders staying downstairs. Water was streaming into their newly constructed home.
— VOD

‘Food Street’ to be built in Kampot ahead of Sea Festival
Kampot will be the first province to have a ‘Food Street’, an area with dozens of vendors offering local delicacies as part of a government scheme.
— Khmer Times