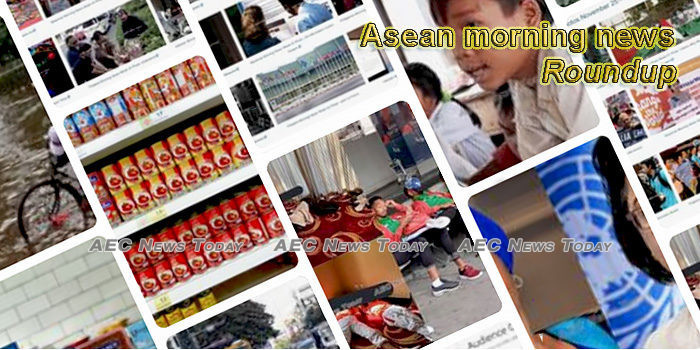 China’s BRI negatively impacting the environment
While its economic benefits and geopolitical implications are often splashed across the front pages of national newspapers worldwide, the impact of China’s Belt and Road Initiative (BRI) on the environment receives much less attention.
— The Asean Post

ASEAN to move forward under Việt Nam’s chairmanship
Despite confronting a lot of challenges, Thailand has mobilised all resources to ensure the success of its ASEAN chairmanship, said Sihasak Puangketkaew, former Permanent Secretary of the Ministry of Foreign Affairs of Thailand.
— Viet Nam News

Drought, dams may lead to death of Mekong
The livelihood of millions of people in China, Laos, Myanmar, Thailand and Vietnam will be affected as drought and newly-built dams impede the Mekong River’s flow, drying up segments of the once fast-flowing river.
— New Straits Times

The Chinese sneezed and south-east asian tourism caught cold
Things have gone a bit quiet on the tourist front.
— The Thaiger

Circular solution to plastic plight
We are drowning in plastics. Unless we change our behaviour, there will be more plastic by weight than fish in the ocean by 2050.
— Bangkok Post

More than 45 winners honoured at the Dot Property Southeast Asia Awards 2019
It was a celebration unlike any other as more than 200 of real estate’s best and brightest were in attendance.
— Bangkok Post

Para-athletes not fussed about Asean Games rescheduling
WHILE others may have kicked up a fuss over the rescheduling of the 2020 Asean Para Games, Malaysia’s athletics squad would rather let their performance do the talking and bring glory to the country.
— The Malaysian Insight

ASEAN and China Strengthen and Continue Media Cooperation
The Thai Public Relations Department today hosted the closing ceremony of the “ASEAN-China Year of Media Exchanges” campaign in Bangkok, celebrating the achievements of the program.
— Newsline (video)

How Southeast Asia is Playing a Crucial Role in Driving Payment Flexibility
Imagine waiting for the latest release of your favorite video game.
— Entrepreneur

Is Cambodian infrastructure ready for real estate in 2020?
The 2019 real estate market in Cambodia has been growing due to increasing demand from both local and international buyers across different property types.
— Khmer Times

Ex-Cambodia Daily Reporters Reject Incitement Charge As Case Heads to Trial
An alleged incitement case against two former Cambodia Daily journalists will be heard by the Ratanakkiri Provincial Court on December 25, more than two years after they were first charged for reporting on a story in the province.
— VOA

Baby Dolphin Death In Kratie
WWF announced on the afternoon of December 24, that a dolphin, aged just 11 days old was found dead floating in Kratie province on Sunday. A team is continuing to investigate and search for the exact cause of death.
— CNE

Health officials warn of Legionnaires risk at Bali hotel
Health officials in Western Australia have warned travellers to take extra precautions when dining at or staying at a prominent Kuta, Bali hotel.
— TravelMole

Nearly $300k Worth of Unsafe Foods and Drinks Seized Ahead of Holiday Season
The National Drug and Food Control Agency, or BPOM, have seized Rp 3.9 billion, or $279,000, worth of damaged, expired or illegally sold food and drink products during a series of inspections ahead of the end-of-year holiday season.
— Jakarta Globe

Laos’ central bank set to use $300M Chinese loans for SME financing
The Bank of the Lao PDR (BOL) is gathering information on commercial banks as it expects to allocate credit for small and medium-sized enterprises (SMEs).
— The Phnom Penh Post

What Does Malaysia’s New Islamic Summit Reveal About its Foreign Policy?
The engagement spotlighted the Malaysian government’s approach to Muslim issues within its wider global outlook.
— The Diplomat (paywall)

Cabinet approves B777m development loan to Myanmar
The cabinet has approved a low-interest 777-million-baht loan under a 30-year contract to Myanmar for infrastructure development in Myawaddy.
— Bangkok post

Myanmar to Debut Trademark Office as Part of Economic Revamp
Myanmar is preparing to open a trademark office in January, part of a legal transition to parallel the country’s broader move from military dictatorship to a semi-democratic state.
— Bloomberg Law

Manila Vice: Xi and Duterte grapple with online casino crime
With its marble walls, gilded lobby and sign with Chinese characters that can mean “paradise on earth,” the Skytop International Club never tried to be subtle.
— Nikkei Asian Review (paywall)

Reporter gets jail in libel case filed by poultry farm
A court on Tuesday sentenced a reporter to two years in prison for criminal libel for a comment she tweeted about a labour abuse grievance at a poultry farm.
— Bangkok Post

Learn & earn: Unesco Learning Coin initiative fulfilling migrant children’s dreams (video)
It is no secret that education is the key to breaking the poverty cycle, but for some of the most vulnerable members of society, the children of migrant workers, household financial pressures often mean that dreams of higher achievements in life remain out of reach.
— AEC News Today

Vietnam ranks 4th in the number of pollution-linked deaths in the Western Pacific region
An estimated 71,365 Vietnamese people lost their lives to pollution in 2017, the latest year for which data was available, according to the Pollution and Health Metrics report by the Global Alliance on Health and Pollution.
— Vietnam Insider

Vietnam aims for 20.5 million foreign tourists in 2020
The tourism sector has set the goal of attracting 20.5 million international visitors in 2020 and serving 90 million domestic travellers, it was said at a review meeting of the Vietnam National Administration of Tourism (VNAT) in Hanoi on December 23.
— VietnamPlus

Vietnam is the third most active tech ecosystem in Southeast Asia
Using a mobile app, truck drivers in Vietnam can now opt to pick up cargo from nearby locations on their empty vehicles during their return trip, thus earning extra income. In the past, up to 70% of trucks return home empty.
— Vietnam Insider

Asean Morning News For May 31