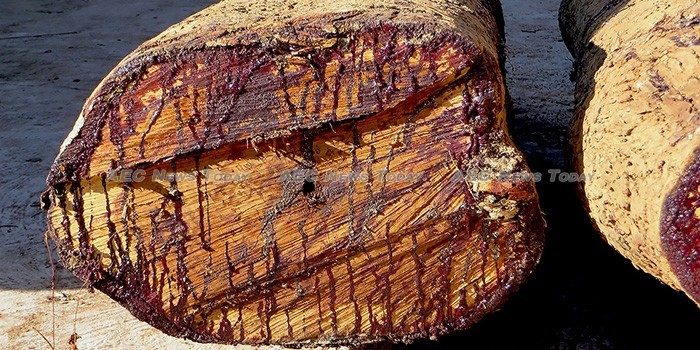 The government of Cambodia is accusing its Vietnamese counterpart of complicity in the illegal importation of increasingly scarce and highly valuable Siamese rosewood.

As Cambodia told the secretariat of the Convention on International Trade in Endangered Species (CITES), Phnom Penh imposed a harvesting ban on endangered hardwood trees such as the Siamese rosewood (D. cochinchinensis) with the 2002 Forestry Act and then prohibited the export of such wood in 2013.

Despite this, Cambodia pointed out, Vietnam reported importing more than 8,000 square metres (about 86,111 sq.ft) of Siamese rosewood from Cambodia in the three years that followed. During that time, Cambodia told the United Nations’s CITES Secretariat, no export permits for Siamese rosewood had been issued.

‘Direct trade in D. cochinchinensis from Cambodia between 2013 to 2016 almost entirely comprised pre-Convention (4,826.4 square metres) and wild-sourced (3,219.2 sq.m) timber imported by Vietnam for commercial purposes, reported by Vietnam only’, reads the Report on species/country combinations selected for review by the Plants Committee following CoP17 issued by the CITES Secretariat in May.

‘Cambodia stated that it had not issued any CITES export permits for Siamese rosewood since its listing in CITES Appendix II on June 12, 2013, although it noted that the CITES Trade Database included ‘trade that was premised on the acceptance of fraudulent CITES permits of Dalbergia cochinchinensis in Vietnam.

‘On the request of the Cambodian [CITES Management Authority (MA)], Notification No. 2017/023 was issued on March 21, 2017 to inform the parties that they should consider any permits purported to have been issued by MA of Cambodia for D. cochinchinensis to be invalid’.

In the report Vietnam in Violation: Action required on fake CITES permits for rosewood trade, issued by the London-based Environmental Investigation Agency (EIA) UK on Tuesday, it states Cambodia gave Vietnam advance notice of the 2013 export ban, but Vietnam blatantly ignored it.

Continuing, it states: ‘Yet, during 2013 and 2014, Vietnam authorised the import of over 8,000sq.m of Siamese rosewood in repeated and flagrant disregard of Cambodia’s formal request for cooperation in preventing such trade… These imports into Vietnam were authorised by Vietnam’s CITES Management Authority in wilful violation of CITES Resolution Conf. 12.3… and its preceding version, which require that ‘Parties not authorise the import of any specimen if they have reason to believe that it was not legally acquired in the country of origin.’

Cambodia subsequently informed the CITES Secretariat that its MA had asked Vietnam to seize illegal Siamese rosewood at the border and take legal action against the use of fraudulent permits, but nothing changed.

‘Vietnam nevertheless continued to allow the entry into the country of Siamese rosewood, repeatedly referencing CITES permits, notwithstanding that they had been previously informed on several occasions of the illegality of those permits’, the Cambodia’s MA reported.

In response, according to the EIA report, Vietnam said that it had ‘verified the legitimacy of the permits with Cambodian officials at the time’ and to prove the claim it submitted emails it said were from the Cambodia MA.

Cambodia, in turn, denied sending the emails, and insisted ‘hacking may be a factor and requested an Interpol investigation into the matter in Vietnam and Cambodia.’

The EIA recommended stern action in support of Cambodia, including censure of Vietnam by the UN.

‘As Vietnam’s MA knew the permits presented to it on import were fake, as Cambodia has stated, it necessarily also knew there were ‘no real permits’ and thus wilfully authorised the imports in the absence of CITES export permits.

‘This is an egregious and deliberate violation of the Convention that, in light of Vietnam’s onward re-exports, justifies a trade suspension being placed on Vietnam’, the EIA concluded

According to an earlier EIA report — the 2013 Routes to Extinction — Siamese rosewood trees have been harvested unsustainably for years throughout the Mekong region to meet a ‘surging demand’ from China, where it is used to make luxury furniture. According to the EIA Siamese rosewood is being wiped out in Thailand, Laos, Vietnam, and Cambodia.

‘In 2014, traders were claiming there was no Siamese rosewood left in Vietnam’, reads the EIA’s 2013 report, adding ‘in Cambodia, mature trees are now considered rare outside of strictly protected areas’.

The EIA’s description of the situation five years ago did not provide much hope for the future, especially as the demand for Siamese rosewood in China has not diminished, causing its monetary value to rise.

‘Siamese rosewood has become so rare and valuable that the practice of logging it is now more akin to wildlife poaching’, the 2013 report reads, adding that ‘the majority of the timber that finds its way to the markets of China is sought by teams of skilled men from rural villages who will spend weeks at a time in remote forests tracking down the last stands’.

Vietnam’s demand for raw timber such as Siamese rosewood may also have contributed to trouble that occurred on the Lao-Cambodia border in 2017.

Lao troops crossed into a disputed zone in February to prevent Cambodia from constructing a bridge, and stayed there for several months before returning home in the wake of high-level bilateral discussions.

A 2017 report by the Forest Trends NGO, entitled Laos Log and Sawnwood Export Ban: Impacts on the Vietnam-Lao timber, said a Lao restriction on timber exports to Vietnam led smugglers to find their way to their markets through Cambodia.

“To be short, when law enforcement for the trade between Vietnam and Laos became more stringent, it makes sense particularly for the traders who have good connections with Cambodian authorities to bring Laos timber to Vietnam through Cambodia”, Forest Trends researcher Xuan Phuc told Cambodian media at the time.