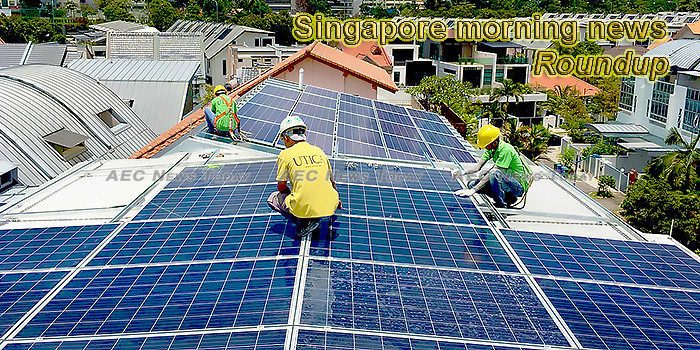 StanChart robbery: UK Secretary of State orders extradition of David Roach to Singapore
The United Kingdom Secretary of State has ordered the extradition of David Roach, the suspect in the 2016 Standard Chartered bank robbery, to Singapore, the Ministry of Home Affairs and Attorney-General’s Chambers said in a joint statement on Monday (Oct 29).
— ChannelNewsAsia

Shared bike fleet slashed by over 50% to 40,500, as Ofo cuts numbers from Nov 1
The shared bicycle population in Singapore will be cut by more than half next month, dipping from 100,000 in September to 40,500 as operators downsize their fleets to meet a Nov 1 deadline imposed by the Land Transport Authority (LTA).
— TodayOnline

M1 reports a 5.5% decline in Q3 profit
Singapore’s M1 has reported a 5.5% year-on-year decrease in profit for the third quarter to S$34.5 million ($24.9 million), in a result the operator mainly attributed to higher acquisition and retention costs.
— Telecomasia

Solar power: Singapore on track to achieve 2020 target | Video
Singapore’s solar energy capacity has quadrupled in the past four years and is on its way to reach a targeted capacity of 350 megawatt peak by 2020.
— ChannelNewsAsia

Blog post alleges greater lapses in procurement in other government agencies than in AHTC based on audit data observations
An unidentified author by the name, Kueh Lapis, hosted on GitHub, has made several noteworthy observations regarding the alleged lapses in procurement made by the Aljunied-Hougang Town Council (AHTC), upon which a high-profile lawsuit was filed against three Workers’ Party Members of Parliament and the town councillors for AHTC.
— TOC

FairPrice aims to collect record 500,000 used textbooks for needy kids
Half a million used textbooks could be made available to needy students this year through NTUC FairPrice’s Share-A-Textbook project.
— Straits Times

Six firms to operate 40,500 shared bicycles
Combined fleet size is fewer than half the figure six months ago
— Straits Times

Dyson parks first electric car facility in world’s most expensive place to own a car
In his Facebook post about British company Dyson’s decision to set up an electric car manufacturing facility in Singapore, Prime Minister Lee Hsien Loong wrote that when he met inventor James Dyson last month, James told him that it was Singapore’s expertise in advanced manufacturing, global connectivity and talented workforce that helped him make up his mind.
— The Edge

Assets of world’s largest fund managers increase by over 15% to US$94 tril
The total assets under management (AUM) of the world’s top 500 fund managers surged to US$9.8 trillion ($13.5 trillion) in 2017, 15.6% higher than 2016, according to the latest Global 500 research from Willis Towers Watson’s Thinking Ahead Institute.
— The Edge

Lornie Highway sees slow, heavy traffic on second day
Some attribute it to lack of road familiarity, but drivers hopeful conditions will get better
— Straits Times

Revised shoebox unit policy may spur buying frenzy: analyst
Buyers may rush to snap up such units, which they can sell at a higher price in the future.
— Singapore Business Review

Lawyer reprimanded, gets additional fine for poem on death penalty
A tribunal has ruled that lawyer Eugene Thuraisingam had not intended to attack the judiciary with his death penalty poem, which was earlier found to be in contempt of court.
— Straits Times

Chart of the Day: 34.4% of Q3 property investment sales are residential
Interest for office properties is picking up.
— Singapore Business Review