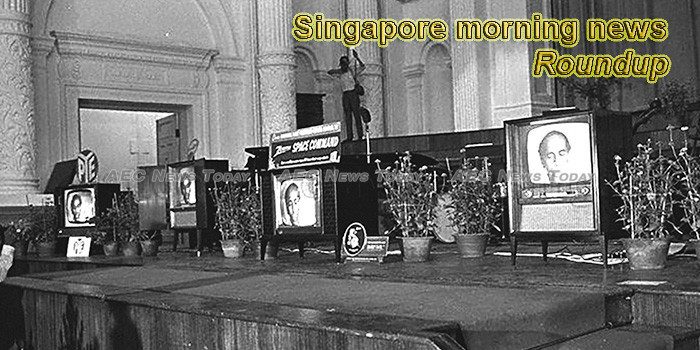 How Singapore is redesigning retirement using biometrics
The Central Provident Fund (CPF) Board of Singapore has redesigned its mobile app to make information on retirement savings easier for citizens to access.
— Gov Insider

Singapore students outdo parents in education: Report
Singapore ranks among the top in the world when it comes to upward mobility in education, with nearly six in 10 adults attaining higher qualifications than their parents.
— The New Paper

Fragrance industry renews focus on safety, sustainability and partnerships at Singapore launch event
The International Fragrance Association (IFRA) launched its Asia-Pacific branch office on Monday with a promise to renew its focus on safety, sustainability and partnerships in the region.
— AEC News Today/PR Newswire (media release)

WeChat Pay to be available at over 600 Cold Storage, Giant, 7-Eleven, Guardian shops from Nov 1
To capture a larger slice of the burgeoning Chinese tourist market, retail group Dairy Farm will roll out cashless payment mode WeChat Pay across its stable of more than 600 Cold Storage, Giant, 7-Eleven and Guardian stores here from next month.
— TodayOnline

Singapore students outdo their parents in education levels
Singapore ranks among the top in the world when it comes to upward mobility in education, with nearly six in 10 adults attaining higher qualifications than their parents.
— Straits Times

Temasek’s Vertex invests in crypto exchange
DUBAI • Vertex Ventures, the venture capital arm of Temasek, said it has invested in Binance to develop a fiat-to-cryptocurrency exchange in Singapore.
— Straits Times

Two teens put on probation over upskirt offences
Two teenage boys were each sentenced to one year and nine months’ probation yesterday after they captured over 60 upskirt videos of girls and women, including their schoolmates and teachers.
— Straits Times

SIA likely to fly non-stop to Seattle from next year
If all goes well, Seattle will become SIA’s fourth non-stop destination to the US, as the airline moves to capitalise on a growing demand for Singapore-US flights and the availability of a new, more fuel-efficient aircraft – the Airbus 350-900.
— Straits Times

Singapore investors plan to invest one third of wealth into healthcare
They are willing to invest in healthcare maintenance with 46% expecting to reach age 100.
— Singapore Business Review

Raffles Infrastructure inks $1.19b deal to build Chinese tourist railways
The railways will have a total length of 70km and will be built in four phases.
— Singapore Business Review

600 retail outlets islandwide in Singapore to accept China’s WeChat Pay from Nov 1
SINGAPORE – Shoppers who forget their wallets on visits to Cold Storage, Giant, Guardian and 7-Eleven will soon be able to pay for their purchases with their mobile phone via WeChat Pay.
— Straits Times

Digital upgrade failed for 3 in 4 SMEs
But some firms think they could still gain 26% from doing so.
— Singapore Business Review

Vertex Invests in Binance to Expand in Singapore
Vertex Ventures said it made an investment in digital asset trading operator Binance to develop a fiat-to-cyyptocurrency exchange in Singapore.
— Bloomberg (paywall)

Prudential scraps retirement age for employees
SINGAPORE (Oct 23): Noreen Wee has been working with Prudential Singapore for 18 years as a lead writer in policy contracts. Now 62 years old, she was set to retire in December this year. But Wee is happy to hear that she can now continue working at the insurance firm – with the same wages and benefits as before.
— The Edge

LTA swipes back at IKEA, defends cost of its bus stop benches
IKEA made a parody ad that took a swipe at the cost of metal benches at Singapore bus stops. Now, the Land Transport Authority (LTA) has fired back.
— Yahoo News

Taming volatility of capital flows
“TODAY it is a sin to run a current-account deficit, and that is crazy,” lamented Singapore Deputy Prime Minister Tharman Shanmugaratnam at the annual gathering of the International Monetary Fund (IMF) and the World Bank in Bali this month.
— Business Times