By Maria Mirasol Rasonable on August 3, 2018 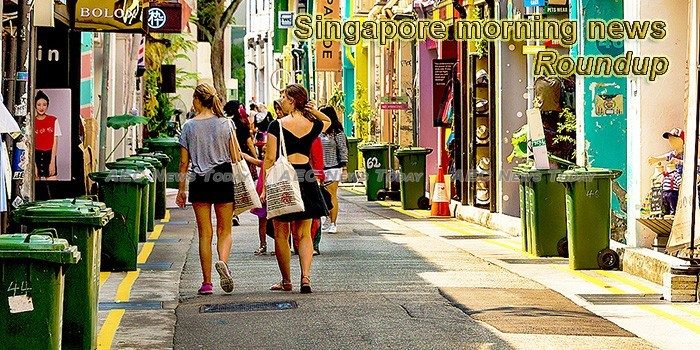 Singapore Govt may start using drones to deliver medicine and for security
Singapore Civil Defence Force and fellow consortium member Garuda Robotics are in talks to use drones in the force’s operations, in particular, to deliver “critical life-saving supplies” and respond to security incidents across the city-state.
— OpenGov

Singapore SMEs beat APAC counterparts in export earnings
Small and medium-sized enterprises (SMEs) in Singapore that are engaged in exporting are the highest earners amongst their Asia Pacific counterparts in 2017, a study commissioned by FedEx revealed.
— Singapore Business Review

Sports fraternity clamping down on sexual misconduct
Mr Troy Engle, 56, director of CoachSG, which is under Sport Singapore (SportSG), said the sporting community and stakeholders met this year to pledge a commitment to stamp out sexual misconduct.
— The New Paper

Scoot to increase airfares by 5% from Sept; others not following suit for now
Planning a year-end getaway with the family? Expect to pay between S$5 and S$30 more for airfares on low-cost airline Scoot, which will introduce a 5 per cent fare hike from September 1.
— TodayOnline

SAF Sportsmen Scheme a boon to aspiring champions
When former 400m hurdles youth record holder Timothee Yap enlisted in the army in 2013, he thought he could take it easy and get more time for his training.
— The New Paper

U.S. Congresswoman calls on Vietnam to release American held during visit
Pompeo is scheduled to meet on Friday in Singapore with foreign ministers from the Association of Southeast Asian Nations, which includes Vietnam.
— Reuters

Pimp who robbed man, tried to start petrol station fire gets jail, caning
A 26-year-old man who committed multiple offences including robbery, trying to set a petrol station on fire and living on a prostitute’s earnings was given jail, caning and a fine on Thursday (Aug 2).
–ChannelNewsAsia

Singapore’s sleep-deprived millennials snooze longer on weekends; habit a worrying sign
More than eight in 10 Singaporeans spend their weekends sleeping in, to repay the sleep debt they have accumulated over the week, a survey by market research firm Wakefield Research found.
— TodayOnline

Manager grabbed ‘bomb’ and threw it out of store
A man walked into a ValueMax pawnshop near Boon Lay MRT station last Saturday and demanded money, claiming that he had a gun and a bomb.
— The New Paper

Commentary: Is having ‘no specific target’ tantamount to ‘no vision’ for Singapore sports?
Realistic targets can have the effect of inspiring initiatives that propel us towards excellence but there’s also a case to be made for not announcing these, says Channel NewsAsia’s Bharati Jagdish.
–ChannelNewsAsia

How Singapore’s NUS is digitising the study of pathology
A team of pathology students, non-academic staff and IT specialists work tirelessly to digitise the 5,000 specimens currently in physical form at the NUS Department of Pathology. The digitised pots can be found on a website called ‘Pathweb’.
— OpenGov

SMRT should not be a semi-retirement organisation to reward faithful and loyal military officials
Singapore is not the only country in the world to have a mass rapid transport system.
— TOC