By Maria Mirasol Rasonable on September 3, 2018 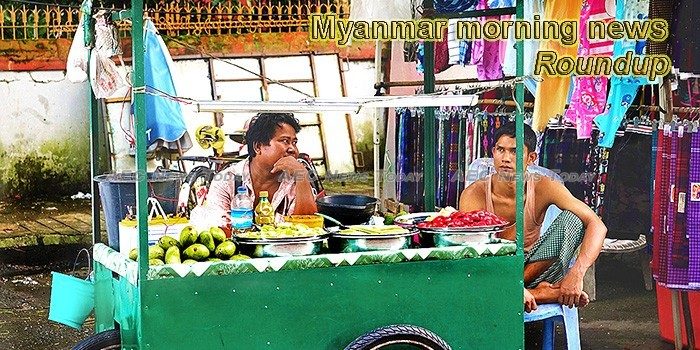 The Road to East: Connecting India, Myanmar and Thailand; gateway to ASEAN
This is the ambitious project that seeks to connect India with Myanmar and onwards to Thailand, which Delhi hopes will be its gateway to ASEAN. The first 160 km stretch is called the India-Myanmar Friendship Highway (IMFH).
— The Indian Express

Reuters Reporters Face Verdict in Myanmar ‘state Secrets’ Case
Yangon, Sep 3 (AFP) Two Reuters journalists accused of breaching Myanmar’s state secrets law during their reporting of a massacre of Rohingya face a court ruling Monday that could see them jailed for up to 14 years.
— LatestLy

IAF chief to visit Myanmar, Malaysia
Air Chief Marshal Birender Singh Dhanoa will be on an official visit to Myanmar and Malaysia from Monday to boost India’s military ties with its eastern neighbours.
— NewsHeads

Four Deaths, Three Missing in Flooding Caused by Dam Breach
Four people have died and three others, including one boy, are missing as a result of flooding of caused by spillwater from a dam on Swar Creek in Taungoo District in Bago Region, according to the Bago Region Government Office on Friday afternoon.
— ReliefWeb

Planned Myanmar-Thailand highway branded social and ecological disaster
COMMUNITY and conservation groups in Myanmar have branded a planned highway linking a port project to Thailand an “ecological and social disaster”, saying it would uproot indigenous people from their homes and farms.
— The Business Times

Riddle of mystery ghost ship in Myanmar waters solved
A stranded vessel empty of crew and goods that was found in Myanmar’s waters this week was being towed by a ship with 13 Indonesian nationals before it became unmoored, the Myanmar Navy said.
— The Nation

Myanmar facing stigma over Rohingya treatment
Baffled, hurt or indignant, many inside Myanmar are struggling to digest a week of opprobrium heaped on their country by the UN and even Facebook over the treatment of the Rohingya, a stateless Muslim group whose plight elicits little sympathy in the Buddhist-majority nation.
— The New Nation

Ericsson deploys triple-standard cell site in Myanmar
Ericsson has deployed a combined 2G, 3G and LTE cell site in rural Myanmar with a new solution designed to keep power consumption per site below one kilowatt.
— Telecomasia

Statement by the Spokesperson on the Preliminary Report of the United Nations International Fact-Finding Mission on Myanmar
The European Union has consistently advocated against impunity for those responsible for systematic human rights violations in Myanmar.
— AEC News Today PR Newswire (media Release)

Media freedom in the dock in Myanmar
Two Myanmar reporters are about to hear whether they are to spend the next 14 years in jail for courageously carrying out their jobs.
— Bangkok Post

Nat’l polls to be fair sans doubt, says PM
Prime Minister Sheikh Hasina yesterday said there is no doubt that the next general election will be held in a free and fair manner, reports UNB.
— The Independent

EVM steam off
Prime Minister Sheikh Hasina yesterday said EVMs should not be imposed hurriedly as the machines need to be introduced on a limited scale in national elections.
— The Daily Star

319 schools closed in east Bago region
A total of 319 basic education schools are temporarily closed in the east Bago region due to floods caused by the collapse of a spillway of Swachaung dam in Yedashe Township in Bago Region on August 29, according to Bago Region Education Officer Office.
— Eleven Myanmar

Ghost ship in Myanmar waters earlier towed by Indonesian-manned vessel: Navy
A stranded vessel empty of crew and goods that was found in Myanmar’s waters this week was being towed by a ship with 13 Indonesian nationals before it became unmoored, the Myanmar Navy said.
— Coconuts Yangon

Myanmar gov’t turns down FFM’s report
The report issued by the Independent International Fact-Finding Mission (FFM) on Myanmar on August 27 has only served to strengthen the government’s concerns.
— Eleven Myanmar

Dengue fever kills four in Pyay
More than 600 people have been infected with dengue fever in Pyay Township in Bago region (West), according to the hospital’s figures.
— Eleven Myanmar