By Maria Mirasol Rasonable on November 7, 2018 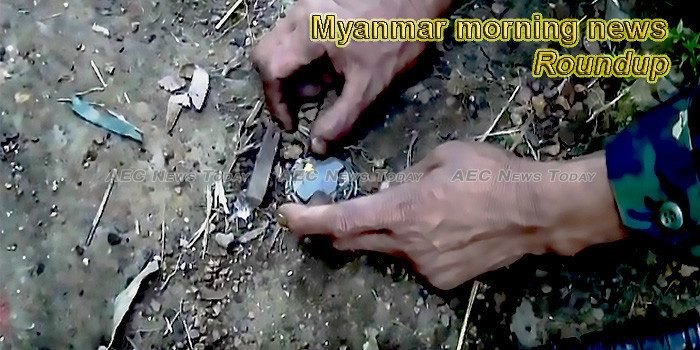 Ethnic parties give wake-up call to NLD
Analysts are poring over the results of Myanmar’s by-elections which took place on Saturday, vainly trying to read the tea leaves, and perhaps reading too much into them.
— Bangkok Post

Too soon to send Rohingya back to Myanmar: U.N. rights envoy
The United Nations’ human rights investigator on Myanmar urged Bangladesh on Tuesday to drop plans to start repatriating hundreds of thousands of Rohingya refugees to Rakhine state this month, warning they would face a “high risk of persecution”.
— Reuters

Facebook concedes it failed to address incitement in Myanmar, must now be prepared for 2020 elections
Facebook on Monday said a human rights report it commissioned on its presence in Myanmar showed it had not done enough to prevent its social network from being used to incite violence.
— South China Morning Post

Myanmar still weak in enforcing contracts, protecting minority investors
Myanmar has done undertaken two reforms to improve access to power supply and the ease of starting a local business, according to the latest report from the World Bank.
— Myanmar Times

How is the melon market for Myanmar and China?
After October, the season in Myanmar begins and takes up to 75% to 80% of the market share for the Chinese watermelon and melon market from November to April.
— Fresh Plaza

KNU Leadership Gathers to Firm Up Position on Peace Process
The Karen National Union (KNU) convened an emergency meeting of its Central Standing Committee to review the state of the peace process at its headquarters in Lay Wah in Karen State’s Paan district on Tuesday.
— The Irrawaddy

Amata to provide helicopter transport near Kawthoung this year
Amata Public Holding Limited is planning to provide sightseeing and transportation services to nearby islands in Kawthoung, Taninthayi region using helicopters in this tourism season, according to Amata Aviation.
— Eleven Myanmar

Facebook must act to stop incitement ahead of 2020 Myanmar poll: report
Myanmar’s 2020 elections may be fertile ground for “incitement to violence” and Facebook should prepare now, an assessment of the tech giant’s presence in the country warned Tuesday, as it detailed how the platform had been used to spread hate.
— Frontier Myanmar

Over 2,900 voters abstain from by-election in Thabeikkyin constituency
Region parliament constituency (1) in Thabeikkyin Township, Mandalay Region, had over 49,000 eligible voters the by-election held in November 3 but over 29,000 voters did not come to polling stations to vote, according to sources released by the Township Election Subcommission.
— Eleven Myanmar

Lawmaker Complains of ‘Shoddy’ Bridge Construction in Kachin
Two bridges and an embankment in Kachin State’s Hsawlaw Township built at a cost of several hundred thousand US dollars have fallen into disrepair only seven months after going into service due to substandard construction, a Lower House lawmaker told The Irrawaddy.
— The Irrawaddy

Observer groups judge the November 3 polls as largely transparent and fair but decry the lack of electoral reform.
ON BY-ELECTION day in Yangon’s Tarmwe Township, a crowd waited through the morning to see President U Win Myint vote for the parliamentary seat he used to represent.
— Frontier Myanmar

Myanmar Gears up For First Round of Rohingya Repatriations Amid Doubts About Their Safety
Myanmar is gearing up to take back more than 2,260 Rohingya Muslim and Hindu refugees who fled to Bangladesh during a military crackdown in Rakhine state as its first group of returnees in mid-November under a bilateral repatriation deal made nearly a year ago, a foreign ministry official said Tuesday.
— Radio Free Asia

Officials Still Using Telecom Law to Silence Critics Despite Amendments
YANGON—Changes to the Telecommunications Law have done little to halt its use by politicians and officials to silence their critics, with 62 legal cases having been filed under Article 66 (d) of the controversial legislation since it was amended in 2017.
— The Irrawaddy

Expressway accidents kill 28 in October, highest death toll in 10 months
Forty five car accidents occurred on Yangon-Mandalay Expressway during October, killing 28 people and injuring 108 others which is the heaviest number of casualties in the past 10 months of this year, according to data from Nay Pyi Taw expressway police office.
— Eleven Myanmar