By Maria Mirasol Rasonable on August 2, 2018 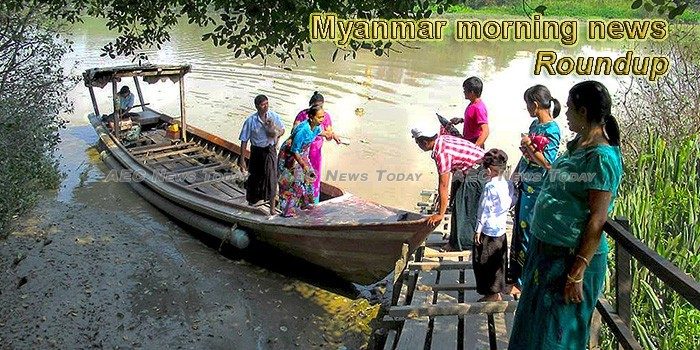 Instant Blockchain Remittance for Myanmar Workers in Thailand
Instant blockchain remittance is on the cards for migrant Myanmar workers in Thailand who want to instantly send money back home as a major Singapore tech firm partners with a Myanmar banking institute to help the neediest people.
— Crypto Disrupt

Myanmar Ranks at the Bottom of Asean for Access to Electricity
Myanmar’s people have the lowest access to electricity in Southeast Asia, according to U Myo Myint, an energy expert who helped conduct a survey on the issue for the World Bank.
— The Irrawaddy

New Myanmar Rakhine commission denounced by observers
A new commission set up by Myanmar to look into human rights abuses in Rakhine state has been criticised by observers on Tuesday as a “political gimmick”, as the country tries to stave off further censure over its treatment of its Rohingya Muslims.
— Mizzima

Only seven rock quarry companies renew licenses
Among 22 companies operating rock quarries in the Kalama Mountain in Paung Township, Mon State, only seven companies have renewed their licenses, according to records from the Mon State Forest Department.
— BNI

Nearly 120,000 displaced in Myanmar floods
Nearly 120,000 people have been displaced after floods submerged a vast swathe of southeastern Myanmar, killing 11 people and sending panicked residents fleeing for dry ground with children perched on their shoulders and few belongings in tow.
— Mizzima

Nai Hongsar urges two Mon parties to merge with all forces at once
The New Mon State Party (NMSP)’s vice-chair Nai Hong Sar urged the leaders of the All Mon Region Democracy Party (AMDP) and the Mon National Party (MNP) to immediately work on merging with remaining forces at once without delay while they are finalizing the merger of the two parties.
— BNI

Impasse over sanctions stifles US response to Myanmar atrocities
Departments in Donald Trump’s government are at odds over whether to levy sanctions against Myanmar military leaders in response to the mass displacement and murder of Rohingya that began almost a year ago.
— Coconuts Yangon

Yangon High Court Summons 3 Suspects in Comedian’s Beating Death
The Yangon Region High Court on Tuesday summoned three suspects who had been controversially freed after being detained in the killing of Facebook comedian Aung Yell Htwe.
— The Irrawaddy

Bilin River is still under watch despite water-level falls under danger mark
“The water level is at 1,017 cm this morning (July 31) so it is below its danger level of 1,022 cm, but the situation is not reassuring due to continuous rainfall. Today is the 4th waning day so the tide will be low.
— BNI

Relatives insist Korean businessman in Myanmar prison was framed
He was soon thereafter sentenced to 11 years in prison, and the sentence was upheld by an appeals court last month. He is now appealing to Myanmar’s Supreme Court.
— Coconuts Yangon

Myanmar farmland law threatens women’s land ownership
Myanmar’s efforts to formalize land ownership under the 2012 Farmland Law leave women at a greater disadvantage relative to men than they were under traditional, community-based land ownership systems, according to a new policy brief produced by Trócaire and Land Core Group.
— Coconuts Yangon

The Cost of Doing Business in Yangon — the Facts and Figures
With a population of more than 7 million, Yangon is the biggest city and main business hub in Myanmar.
— The Irrawaddy

Myanmar flood toll rises to 12
The death toll after several weeks of monsoon rains that flooded at least seven states and regions in the country has risen to 12, with at least one person still missing, government sources said Tuesday.
— Myanmar Times

From the Land Down Under and back: A diaspora story
Jason Maung Maung has little recollection of the time when he and his whole family left Myanmar to start a new life as far away as possible from the reach of the ruling junta. He was three years old then.
— Myanmar Times

A small space to soothe the tired, weary spirits of city folk
A group of children played on the swings in reckless abandon, unmindful of the threatening monsoon clouds that have brought calamitous floods in some parts of the country.
— Myanmar Times