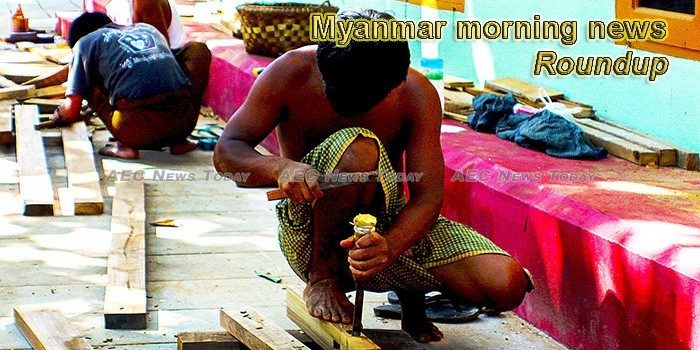 Commission meeting next week
The Thai Minister of Foreign Affairs is scheduled to co-host the 9th Meeting of the Thailand-Myanmar Joint Commission for Bilateral Cooperation (JC) in Nay Pyi Taw early next week.
— NNT

$50.3M Grant From Japan to Help Central Bank Beef Up Financial Network
The Central Bank of Myanmar on Wednesday signed an agreement with the Japan International Cooperation Agency (JICA) for a grant of up to 5.59 billion yen ($50.3 million) to upgrade the bank’s financial network system.
— The Irrawaddy

Govt, rather than conflicts, stands in the way of FDI in Kachin
IN an article “Kachin fighting scaring off investors: official” published by The Myanmar Times on June 21, U Tun Kyaw Kyaw, assistant director of the state’s Directorate of Investment and Company Administration (DICA), said that Chinese investors who had expressed interest in construction, mining, livestock, agriculture, electricity and tourism have had second thoughts as the fighting intensified in the region.
— Myanmar Times

30 years on, Myanmar remembers storied pro-democracy uprising
Students and former activists in Myanmar marked the 30th anniversary of the famed 1988 pro-democracy uprising with a rousing but low-key ceremony, the culmination of three days of events to commemorate the revolt and its brutal suppression.
— Mizzima

Bagan “Ready” for UNESCO Ground Inspection
The Bagan branch of the Department of Archaeology, National Museum and Library said the historic site is ready to host members of the World Heritage Site Committee, which is sending a team to visit the area in September.
— The Irrawaddy

UWSA Still Open to Joining NCA in Exchange for Right to Quit, Alter Pact
The United Wa State Army (UWSA) would consider signing the Nationwide Ceasefire Agreement (NCA) if the government and Myanmar’s military (Tatmadaw) gave the group a written promise that it would have the right to seek changes to and/or resign from the agreement, a UWSA official said.
— The Irrawaddy

Yangon Court Charges 10 Over 2015 Drug Bust
The Yangon North District Court on Thursday charged 10 suspects including Min Oo Khaing, owner of Kaladan Delta Development (KDD), in connection with what was at the time a record drug bust in Yangon’s Mingaladon Township three years ago.
— The Irrawaddy

Hydropower is back
After announcing high-profile gas-fired power projects earlier this year, the Ministry of Electricity and Energy is now focusing on a string of hydropower dams – most with Western developers – to meet Myanmar’s growing energy needs.
— Frontier Myanmar

Captured wild elephants die up to 7 years earlier than captive-born elephants
Placing a wild elephant in captivity can shorten its life by several years, according to a new study published in Nature Communications based on records of 5,000 logging elephants in Myanmar.
— Coconuts Yangon

Two years maternal and child health care program launched
‘A Drop of Milk’, a 2-year pilot program for improving maternal and child health outcomes across 138 villages in Southern Shan State, Myanmar was launched by Tag International Development (TAG), Rotary Club of Yangon & @Rotary Club of Vashon and the Pindaya General Hospital together with the support of the Embassy of Israel and Israeli Doctors from Tel Aviv Sourasky Medical Center, according to a press release.
— BNI

Northern Military Command Threatens Closure of SSPP/SSA Liaison Office
A Tatmadaw official accuses the Shan armed group of demanding ‘tax payment’ from a clinic in Lashio, a claim that the SSPP/SSA denies.
— BNI

Experts conduct structural survey of Bagan pagodas
A team of experts have recently conducted study on the structural strength of pagodas in Bagan to help authorities decide, which of the structures could be opened to the tourists, U Aung Aung Kyaw, director of Bagan Archeology Department told The Myanmar Times.
— Myanmar Times

Mid-month storms expected across Myanmar
A depression has formed over the Bay of Bengal and is expected to bring storms across Myanmar during the second 10-day period of August.
— Coconuts Yangon

Lack of retail offerings in Myanmar yields growth opportunities for investors
Demand for retail space has been on the rise in Yangon, where the population has swelled and living standards are improving.
— Myanmar Times