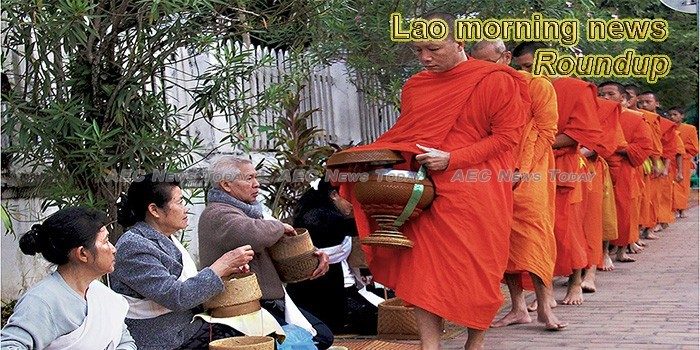 Strengthen news delivery for a better future, media advised
The media has further to go in terms of improvement and development, and its personnel should bolster their skills at all levels to sustain high standards of journalism, the Deputy Minister of Information, Culture and Tourism has said.
— Vientiane Times

Rethink plans to dam Mekong after Laos disaster
The collapse of the Xe-Pian Xe-Namnoy dam after heavy rains last month that killed more than 30 in Laos and left thousands of Lao and Cambodian people homeless is regniting an urgent debate about precenting similar strategies in future.
— Nikkei Asian Review (paywell)

Lao Migrant Workers in Thailand Stage Protest Over Dam Disaster
About two dozen Lao migrant workers in Thailand gathered in front of the Lao embassy in Bangkok on Friday, demanding that the Lao government take responsibility for a deadly dam breach in July and offer fair compensation to the thousands of villagers it affected.
— Radio Free Asia

36 confirmed dead, 98 still missing in Attapeu
Military personnel and a rescue team from Singapore are continuing the search for the 98 people still missing in the wake of the dam burst, with the number of dead confirmed at 36.
— Vientiane Times

Survivors Recount Horror of Laos Dam Collapse
Samled Inthavong had almost finished hoisting his family members into a boat when a building uprooted by the collapse of a dam upstream slammed into his house.
— ReliefWeb

Malaysia Committed To Enhance Education Cooperation With Laos
The statement was made by Ambassador of Malaysia to the Lao PDR Mohd Aini Atan when he paid a courtesy call to Minister of Education and Sports Sengdeuane Lachanthaboun in Vientiane on Friday, 10 August 2018.
— Lao News Agency

Survivors Recount Horror of Lao Dam Collapse
The catastrophic collapse of a dam in southern Laos has displaced thousands and left scores dead with the toll expected to climb. The disaster is so severe it has prompted to the Laos government to halt the approval of new dams until a thorough review of its existing projects in conducted. David Boyle reports from Attapeu province.
— EBLNews