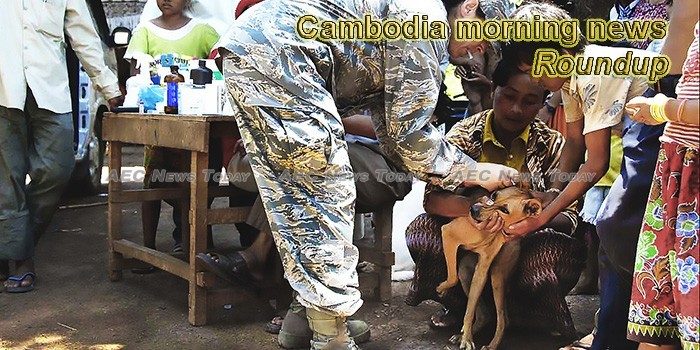 Taskforce guards Kem Sokha’s home
A taskforce has been created to guard former opposition leader Kem Sokha who was released on bail earlier this month and confined to a four-block radius around his home in the capital, according to a document obtained by Khmer Times yesterday.
– Khmer Times

Water taxis, rail lines boosting regime’s credibility, says Minister
The launch of the water taxi and rail services this year enhanced the government’s credibility and served as an example of the efforts made by the authorities to provide good services to the public, said Transport Minister Sun Chanthol to Khmer Times in an exclusive interview.
– Khmer Times

Cambodia Very Attractive To Belgium Firms
Investors and firms from Belgium have their eyes set on the kingdom due to its advantageous geographical location and investor-friendly policies, said representatives of the public and private sectors from the European nation.
– B2B Cambodia

Cambodia’s youth learn business expertise
The Ministry of Education, Youth and Sport last week hosted a seminar to promote entrepreneurship among young Cambodians, hoping to inspire them to set goals and plan for the future.
– Phnom Penh Post

Mine museum boss free on bail
The founder of the Cambodian Landmine Museum in Siem Reap province and his two colleagues, who were arrested and put in pre-trial detention early this month on weapons possession charges, have been released on bail.
– Phnom Penh Post

Banks and MFIs can employ armed police: Ministry
Financial institutions may employ armed guards at their premises, but, to do so, they must first submit a request at the Ministry of Interior, according to a ministry announcement released last week.
– Khmer Times