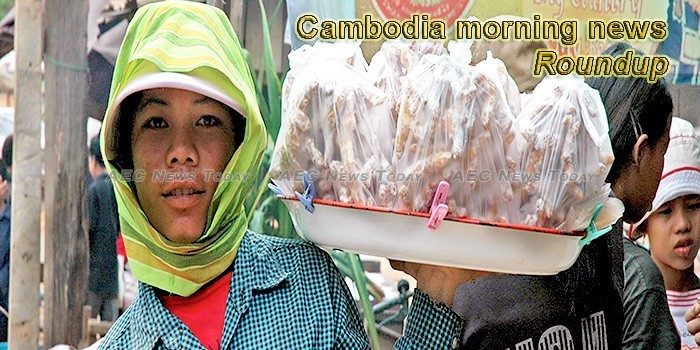 Bogus threat to suspend Cambodia’s UN seat raises PM’s hackles
The European Union is not plotting to have Cambodia thrown out of the United Nations, despite what one Phnom Penh newspaper recently reported, and what the Cambodian government now believes.
— AEC News Today

Cambodia PM denies ‘international pressure’ behind release of opposition leader
Cambodian prime minister Hun Sen batted down speculation Wednesday that he caved to international pressure after an opposition leader was released from jail, claiming the decision was made for his ailing foe’s health and safety.
— Agence France-Presse via The Jakarta Post

PM Hun Sen: Kem Sokha Is Not Released, but Moved to New Detention Place
Cambodian Prime Minister Hun Sen claimed that Kem Sokha has not yet received any amnesty; yet the change of the new detention was done on humanitarian reasons, addressing to 27,444 workers from 24 factories in Kompong Speu province on Wednesday.
— Fresh News

‘No complaints filed’ after trade remedy law
The Ministry of Commerce official in charge of the Kingdom’s new trade remedy law said that no complaints had been filed by Cambodian businesses since the anti-dumping measure was put in place nearly one year ago.
— Phnom Penh Post

US ambassador concerned over souring relations
Incoming US Ambassador to Cambodia Patrick Murphy voiced concerns over deteriorating relations between Cambodia and the US during a recent visit to the Kingdom.
— Khmer Times

PM promises to work harder
Prime Minister Hun Sen has promised to work twice as hard now that his government has a new mandate, thanks to winning a landslide in the July 29 national elections. He also promised to provide faster and more efficient public services in the Kingdom.
— Phnom Penh Post

‘Dire consequences’ from sanctions, warns AmCham
American businesspeople in Cambodia have warned that any sanction against the Kingdom would have “dire consequences” that could push Cambodia even further into the arms of China.
— Phnom Penh Post

Cambodia Needs Political Reform to Regain Credibility: Analysts
At a meeting on Thursday at the Heritage Foundation, speakers said the newly one-party parliament did not reflect voters’ wishes to see pluralistic democracy in the country.
— VOA

Cambodia considers law to allow house arrest of suspects
Cambodian Prime Minister Hun Sen said on Wednesday he is considering a new law to allow criminal suspects to be placed under house arrest in certain circumstances, as an alternative to incarceration.
— Bangkok Post

What is the end goal of America’s sanctions on Cambodia?
A good rule in foreign relations is that not every problem can be fixed. The US seems well aware that it cannot help fix the problems of one-party rule in Laos, which has been controlled by an authoritarian communist party since 1975.
— Asia Times

Cambodia Hungry for More Foreign Investment in Airlines
The Cambodian government continues to solicit investment from foreign companies, particularly in China, to establish start-up carriers beyond the nine that already operate in the kingdom.
— Aviation International News

Preah Sihanouk beach developments halted
After receiving an order from Hun Sen, Minister of Land Management Chea Sophara led a team of experts and relevant officials to Sihanoukville to call a halt to the illegal development of a beach.
— Phnom Penh Post

PM Hun Sen: Cambodian GDP Per Capita to Reach $2,000 by 2023
Cambodian Prime Minister Hun Sen expressed optimism that if Cambodian economy continued to grow as at 7% per annum, the average GDP per person will be increased from $1,560 in 2018 to over $2,000 by 2023, addressing to 27,444 workers from 24 factories in Kompong Speu province on Wednesday.
— Fresh News

Cambodian Experts to Learn About Wild Animal Tracking in India
Cambodian wild life experts will travel to India to learn about the installation of GPS (geographical positioning system) tracker with elephants, according to local media report.
— Agence Kampuchea Presse

Outrage at ‘Adhoc 5’ hearing as key witnesses absent and verdict looms
The Phnom Penh Municipal Court on Tuesday resumed the trial of the “Adhoc 5,” the name for a group of rights activists accused of bribing a hairdresser to lie about an alleged romantic relationship with jailed opposition leader Kem Sokha.
— Phnom Penh Post

Cambodia, US vow to boost ties
US President Donald Trump has pledged to work with the Cambodian government to enhance cooperation and relations between the two countries and expand global health cooperation, according to a Cambodian official.
— Khmer Times