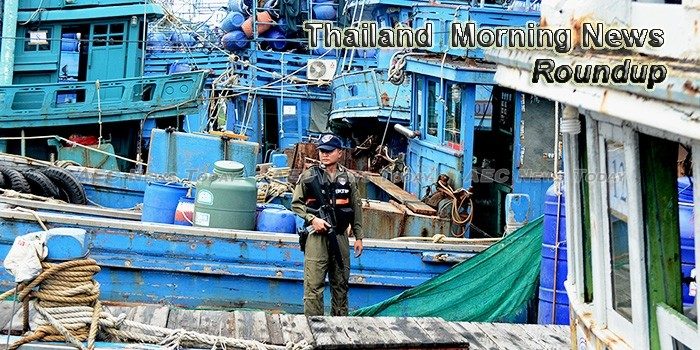 Public Health warns people of heatstroke as mercury may rise to 43C
The rising temperature is raising the risk of heatstroke, the Public Health Ministry warns on Sunday. The ministry’s permanent secretary Dr Sopon Mekthon thus advised people to drink two litres of water a day during summer to lower the risk.
– The Nation

Designing digital organisations for a digital economy
Digitisation is often championed by one unit within an organisation, with a narrow approach limited to changing technology or making the transition to automated processes.
— Bangkok Post

Search continued on 23rd day for missing Russian tourist at Koh Tao
Valentina Novozhyonovam, 23, has gone missing during her trip to Thailand’s Koh Tao island since February 15. An ongoing investigation suggests she might have had an accident while free diving – her favourite hobby.
– The Nation

NZ approves Thai cooked duck imports
New Zealand for the first time has approved the import of cooked duck meat from Thailand, with the first shipments expected to start this month.
– Bangkok Post

Plea for World Bank to give fair ranking

Deputy Prime Minister Somkid Jatusripitak has called on the World Bank to conduct a fair assessment of Thailand’s ease of doing business in the next survey, for he believes that the country has made great progress and deserves a higher ranking.
– Bangkok Post

SET-listed Bangkok Aviation Fuel Services Plc (BAFS) is mulling an extension of a pipeline project from the North of Thailand into Myanmar and China, with plans to conduct a feasibility study by the end of this year or early next.
– Bangkok Post

Vongthep: On Thailand-Myanmar migration issues
Myanmar and Thailand signed a bilateral MOU to govern the labour migration between the two, especially from Myanmar to Thailand.
— Myanmar Times

Lacoste eyes youth in online push next year
Lacoste, the French premium casual apparel company, plans to start its online business in Thailand next year, as it sees a lot of potential in the youth market.
— Bangkok Post

Govt ramps up long-term care for elderly
OF ABOUT 1.3 million housebound and bed-bound elderly people, just a little over 10 per cent have received long-term care services from the state.
— The Nation

Taxpayers ‘should not need to foot bills’ for agencies’ overseas trips
OVERSEAS trips organised by independent agencies as part of special courses are beneficial but the costs should not be borne by taxpayers, leading thinkers opined.
— The Nation