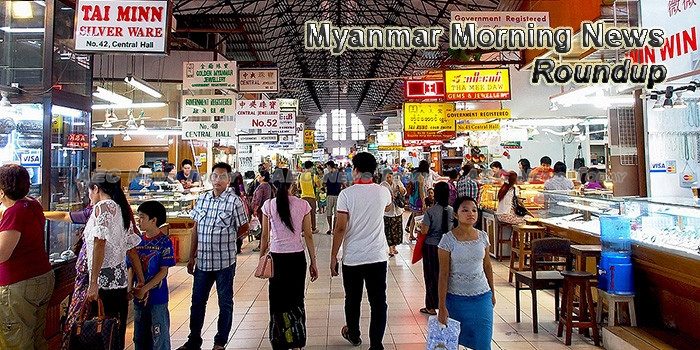 UN asked to refer Myanmar to ICC
The United Nations Security Council should refer Myanmar, also known as Burma, to the International Criminal Court (ICC) because of its failure to investigate mass atrocities against ethnic Rohingya, Human Rights Watch said on Friday.
— Dawn

UK drags heels on sending mass rape investigators to Myanmar
A Foreign Office team specialising in gathering evidence of sexual violence in conflict zones has yet to be deployed to Myanmar’s refugee camps despite evidence that systematic mass rape has been used as a weapon by the Burmese military against the Rohingya muslim minority.
— The Guardian

Aung San Suu Kyi visits strife-torn Rohingya areas of Myanmar
Myanmar’s leader touched down in Rakhine state to see for herself the crisis that has seen over 600,000 Rohingya cross into Bangladesh since a brutal operation began against militants in the area.
— Daily Mail (video)

Dow to apply Thai experience in its Myanmar operations
AS Dow Water & Process Solutions brings its international water treatment solutions to Myanmar, the firm plans to leverage its experience working with partners in Thailand over many years and apply it in the neighbouring country.
— The Nation

Natural gas export earnings up this year
Myanmar has made more than US$1.6 billion from exporting natural gas to foreign countries as of the end of October this fiscal year (2017-18), according to the Ministry of Commerce. That is an increase of US$20 million (27.29 billion kyat) over last year’s earnings, said Khin Maung Lwin, a senior ministry official.
— Eleven Myanmar

Dane Kristian Schmidt EU’s new Ambassador to Myanmar
Ambassador Schmidt, who arrived to Myanmar in September 2017, will represent the European Union and serve as Head of the EU Delegation in Yangon during the next four years.
— Scandasia

Nuclear crisis, extremism top Asean Summit agenda
Twenty-one world leaders, including US President Donald Trump, will be converging in Manila next week as the Philippines hosts the 31st summit and related meetings of the Association of Southeast Asian Nations (Asean) amid tensions in the Korean Peninsula.President Rodrigo Duterte will preside over the Asean Summit with fellow leaders from Brunei, Cambodia, Indonesia, Laos, Malaysia, Myanmar, Singapore, Thailand and Vietnam.
— Eleven Myanmar

15 deaths, 134 injuries reported on Yangon-Mandalay Highway in October
As of late October, 65 traffic accidents were reported for the Yangon to Mandalay Highway, leaving 15 people dead and 134 injured.
— Eleven Myanmar