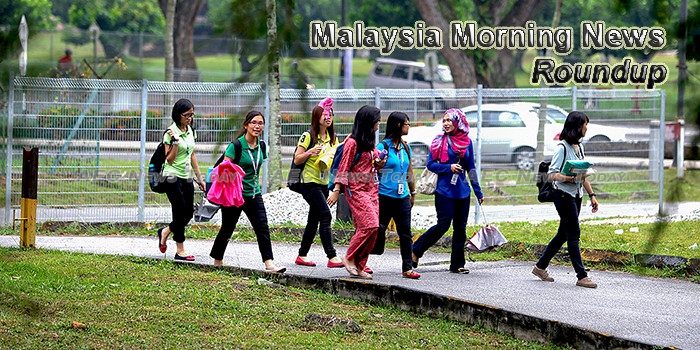 Malaysia gets its first eSports gaming hub
ONE of the most common piece of advice a gamer gets is to get up and leave the house once in awhile. Good news gamers, now you can do just that, and still not give up your gaming needs at The Pantheon in One City, Selangor.
— The Star Online

Govt in about-turn on withholding tax, grants exemption to overseas firms
The government has decided not to tax the income of businesses and enterprises providing technical services and assistance to companies here from outside of Malaysia, just a couple of months shy of the first anniversary of its implementation.
— The Sun Daily

Malaysia to boost Ghana’s Oil Palm sector
Malaysia is set to partner with industries in the oil palm sector to develop their capacities.
— Joy Online

Grab in Malaysia wants subsidies for trips to and from public amenities
Ride-hailing firm Grab is calling for the Malaysian government to offer subsidies for trips to and from designated transit stations and public amenities, including trips to government hospitals, sports hubs, libraries and Urban Transformation Centre venues in Budget 2018, to be announced on Friday.
— South China Morning Post

Financial restraint in Budget 2018
The Government is expected to exercise financial discipline even though the coming budget, which will be unveiled tomorrow, is the last one before the next general election.
— The Star Online

No plans for electric vehicles in Malaysia, says Perodua
Perusahaan Otomobil Kedua Sdn Bhd (Perodua) has no plans to introduce electric vehicles (EV) in Malaysia in the near future despite Daihatsu Motor Co unveiling a concept EV at Tokyo Motor Show 2017 on Wednesday.
— The Star Online

Malaysia’s East Coast Rail Link sees interest from over 1,000 subcontractors
A total of 1,118 engineering and construction companies in Malaysia have shown their interests in the civil works of the 55 billion ringgit (13 billion U.S. dollars) East Coast Rail Link (ECRL) project, which will be led by China Communications Construction Company (CCCC).
— Xinhua

Emmanuel Surendra, “A Historical Timeline Of BR1M In Malaysia”
Launched in 2012, BR1M provides cash grants–or “handouts” as Surendra calls them–to low-income households and individuals. The payments are awarded to Malaysians irrespective of employment, job-seeking activities, disability, or any other conditions apart from low income.
— Bien

Most Malaysians cannot afford to retire
MALAYSIA is ageing, and the population over 65 should come to 15% of the population by 2035. Current Employees Provident Fund (EPF) savings for most Malaysians are barely enough for a decent life after retirement.
— The Star Online

Kim Jong-nam murder suspects revisit Malaysia airport
THE two women accused of killing Kim jong-nam, the half-brother of North Korea’s leader have toured the Malaysian airport as participants in their murder trial visited the scene of the attack.
— News.com.au