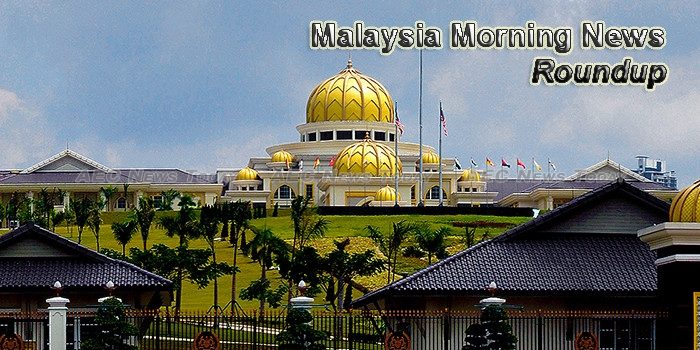 Malaysia seeks Chinese fillip to reach high-income status by 2020
The clock is ticking on Malaysia’s drive to become a high-income country by 2020, and it has turned to China for some extra momentum.
— Nikkei Asian Review

Malaysia’s future in good hands, says Najib
MALAYSIANS can be assured that their future and the country’s is in the hands of a government that is capable of delivering the goods, said Prime Minister Najib Razak.
— The Malaysian Insight

Expert: Malaysians among members of IS channel created by arsonist
Some Malaysians are believed to be members of a pro-Islamic State (IS) Telegram channel developed by one of the two jihadists who were killed after torching a police station in West Sumatra, Indonesia, on Sunday.
— Free Malaysia Today

Cuba, Malaysia Cooperate to Promote Social Transformations
Cuba and Malaysia have reaffirmed their willingness to cooperate within the framework of the UNESCO”s Management of Social Transformations (MOST) Program, during a meeting held between the delegations of both countries at the 39th General Conference.
— Prensa Latina

Hitting a new Low in 1MDB answer
The Malaysian Anti-Corruption Commission (MACC) must not abscond from its constitutional duty to investigate the ample hard evidence of corruption, abuse of power and criminal breach of trust in 1MDB as confirmed by its own former senior officer.
— Free Malaysia Today

Mudajaya to finance 49 MW in Malaysia with Islamic bonds
Mudajaya, a Malaysian engineering and construction group, aims to raise up to 245 million ringgit ($58.7 million) by issuing sukuk Islamic bonds. It will use the proceeds to finance the construction of 49 MW of solar capacity in northern Peninsular Malaysia.
— PV Magazine

Prices of seafood, vegetables set to rise in Malaysia due to rainy season
Fishermen in several Malaysian states have warned of a price increase for fish and other seafood as they brace for a considerably lower haul caused by the rainy season that leads to rough seas, and forcing fishermen to stick closer to the shoreline.
— The Straits Times (paywall)

Singapore, Malaysia conduct joint exercise at Second Link
A car carrying a prominent businessman and three passengers “collided” with a truck carrying 20 drums of hydrochloric acid – resulting in five of the drums falling onto the road and leaking. One drum “fell” into the waters below, though it remained sealed. This was the scenario at yesterday’s emergency response exercise at the Tuas Second Link.
— The Straits Times (paywall)

[Video] Should Muslims Support Same-Sex Marriage In Malaysia? See What These Imams Have To Say
As Australia celebrates a pivotal day in history for same-sex marriage and with its Prime Minister Malcolm Turnbull announcing for the bill to be legalised before Christmas, some LGBT Malaysians can only ‘wish’ for that day to come – while others, unsurprisingly express their disgust over the news.
— Malaysian Digest