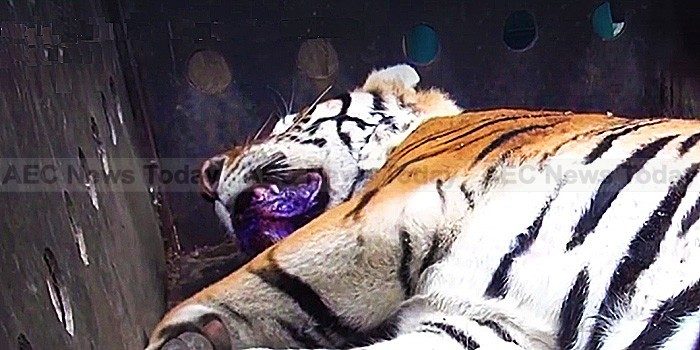 More often than not these days when wild animals stray into the path of humans it is the animal that ends up worse off. Some good news out of Thailand today where video showing the successful capture of an injured adult male Thailand tiger who had wandered close to farming communities.

According to local media reports authorities were summoned when the fully grown Thailand tiger was spotted roaming through a cassava plantation in Lampang the country’s northeast, and also at a creek 500 meres (546 metres) away.

Officials from the Department of National Parks, Wildlife and Plant Conservation (DNP), along with staff from the Doi Chiang Dao Wildlife Research Station in Chiang Mai some 180km (112 miles) away, and local villagers cordoned off the area, before finding the 1.2 metres (3.94ft) high, 160cm (5.25ft) long, 200kg (441lb) Thailand tiger hiding in thick grass just 30 metres (33 yards) from the road.

According to reports the big cat offered little more than growling resistance, enabling officials to easily sedate it with a tranquilliser dart.

Officials and volunteers quickly caged the sleeping cat before transporting it to Doi Chiangdao Wildlife Research Station for treatment, after which it will be released back into the wild.

Thailand is believed to have the largest community of Indochinese tigers according to the World Wildlife Fund (WWF) who put the figure at about 250, or between 35 and 71 per cent of those estimated remaining in the wild.

Thailand a major abuser of tigers (and other wildlife)

Thailand has also been a major abuser of tigers, with tiger-for-tourist attractions operating in several parts of the country where people can be photographed with tiger cubs, or adult Thailand tigers.

One of the worst offenders for this was the internationally known ‘Tiger Temple’, or Wat Pha Luang Ta Bua Yanasampanno, in Kanchanaburi Province in the west of the country. A Theravada Buddhist temple, the ‘Tiger Temple’ for many years operated unlicenced, raking in millions of dollars annually from exploiting Thailand tigers.

After repeated attempts to shut the temple down in the wake of a string of credible complaints outlining questionable goings-on there, more than 500 police, soldiers, and wildlife officials finally forced their way into the temple last May and began removing the 137 tigers it housed.

For years the ochre-clad inhabitants of a temple belonging to a religion that preaches the unimportance of worldly possessions had been charging up to 1,000 visitors or more a day an entrance fee of Bt600 (US16.87), even though it wasn’t permitted. For getting up close and personal with its Thailand tigers visitors could make a ‘donation’, entitling them to bottle feed baby tigers, or have their photo taken with fully grown Thailand tigers, with such ‘donations’ reaching $140.

Hopefully a much better fate awaits this Thailand tiger and he will be released in an area with abundant food supplies and a dearth of human inhabitants.

Update: This story was last updated at 09:38am on January 22, 2017: The Bangkok Post reported today that the tiger, identified as “HKT-178”, thought to be around seven years old, had died as a result of injuries it was found with at the time of its capture. It had been tracked by the DNP since 2011. Accordingly the title of this story was altered to reflect the updated details.

Go here to see the video by Top News Th