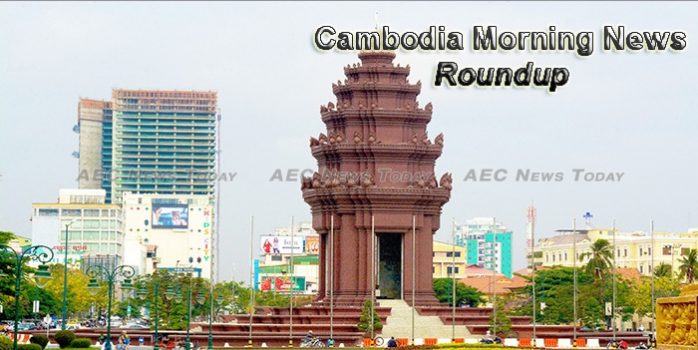 H.I.V. Stalks Prostitutes and Their Children in Cambodia
Abortion and AIDS are the two most common causes of death among Cambodian
female sex workers, and AIDS is the most frequent cause of death among their children, according to a small new study.
— The New York Times

Investment Denied After Presentation To Wrong Body
A South Korean construction company was denied permission to invest in a multimillion-dollar irrigation system because company executives presented their plan to the wrong ministry, a government minister said on Monday.
— The Cambodia Daily (paywall)

Acleda Replaces Logo After Gov’t Demand
Acleda Bank changed its 23-year-old logo and began replacing signage across the country on Friday at a cost of at least $3.5 million after the government said the design—a majestic, mythical bird encased in a circle—was too similar to that of the Economy and Finance Ministry’s, according to the bank’s president.
— The Cambodia Daily (paywall)

Government Ditches Hydropower Dam for More Coal Power
The government has indefinitely put off plans for a hydropower dam in Koh Kong province’s Areng valley in favor of expanding an existing coal-fired power plant, though conservationists worry that a planned transmission line through the ecologically sensitive valley could still inflict heavy damage.
— The Cambodia Daily (paywall)

Cluster model to entice SEZ investors
Kerry WorldBridge Logistics SEZ, which is developing a 63-hectare industrial park and free trade zone 17 kilometres south of the capital in Kandal province, has taken on a new partner to design and create an “industry and technology cluster” aimed at attracting non-garment manufacturing investment to its embryonic special economic zone (SEZ).
— The Phnom Penh Post

Cambodia approves power projects to reduce electricity imports
The Cambodian cabinet has approved two electricity development projects in a bid to address the increasing demand for electricity in the country.
— Bangkok Post