Cambodia Morning News For May 22 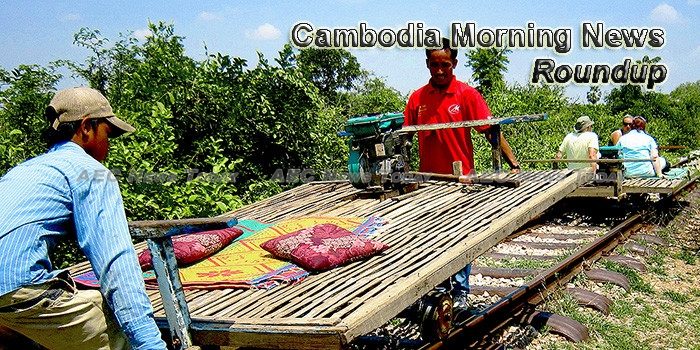 US Judge Dismisses Lawsuit Against Cambodian Government
A U.S. lawsuit accusing the Cambodian government of the wrongful imprisonment of a CNRP official was dismissed by a judge earlier this month because the court did not have sufficient jurisdiction over a foreign government after Prime Minister Hun Sen’s oldest son was dropped as a co-defendant in the case last month, according to those involved.
– The Cambodia Daily (paywall)

Axiata sells 10% stake in Cambodia’s Smart
Axiata Group sold a 10 percent stake of its Cambodian subsidiary Smart Axiata to Japanese group Mitsui Co Ltd to form a strategic partnership and further the firm’s activity in the Kingdom, according to a company release on Friday.
– The Phnom Penh Post

Election Rules for Media Called a Threat and a ‘Reminder’
Officials yesterday said government-issued media guidelines for election coverage which prohibit the publication of news that affects the country’s “social stability” were just a “reminder” of existing laws, but some NGOs said the issuing of the code of conduct was an act meant to “stifle dissent.”
– The Cambodia Daily (paywall)

Officials say Sesan dam will cause floods in September
Stung Treng provincial authorities say they have warned villagers living upstream of the Lower Sesan II dam to expect floods in September as one of the dam’s 50-megawatt turbines goes into operation.
– The Phnom Penh Post

Shifts in development finance
There is good reason to be optimistic for Cambodia’s future. Robust growth has resulted in rapidly increasing well-being for many, as Cambodia trades with the world and welcomes millions of tourists each year. And recently the country successfully hosted the World Economic Forum on Asean, demonstrating that it is well on its way to being an important regional player.
– The Phnom Penh Post

Shocking reality of Cambodia’s child sex workers
NOTHING showcases the confronting reality of poverty like a child directly propositioning you for sex.
News.com.au

Tobacco deal leaves farmers out
It has been more than six months since Vietnam agreed to waive duties on 3,000 tonnes of Cambodian dried tobacco exports per year, yet local smallholder tobacco farmers claim the agreement has done little to improve their incomes, with some accusing large tobacco companies of hoarding all the profits.
– The Phnom Penh Post