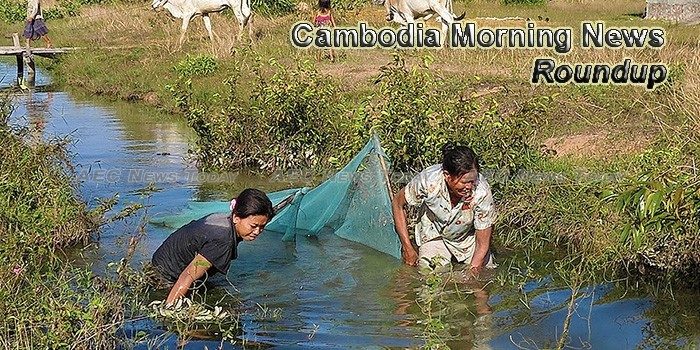 EGA reports Cambodian casino losses
Nasdaq-listed Entertainment Gaming Asia (EGA) reported a net loss of $6.7 million for the fourth quarter of 2016, compared with a loss of $2.7 million in the same time in 2015 largely due to the cancellation of its operations in Cambodia, the company said in a filing on Monday.
— The Phnom Penh Post

Bilateral Trade With China Jumps to $4.8 Billion
Trade between China and Cambodia swelled to $4.8 billion last year, up by about $200 million from the year before, while Beijing has now given the government $4.2 billion in grants and loans, Prime Minister Hun Sen said on Tuesday.
— The Cambodia Daily (paywall)

Government Screed Slams Critics, Vows ‘To Tell the Truth’
The Foreign Affairs Ministry released an unusual defense of some of the government’s recent actions on Tuesday, accusing foreign diplomats and journalists in the country of colluding to destabilize the country by deliberately twisting the truth.
— The Cambodia Daily (paywall)

Government Scrutinizes Garment Worker Truck Drivers’ Backgrounds
The backgrounds of garment worker transport trucks are to be put under the microscope in a government initiative aimed at stymieing reckless driving, officials have said.
— VOA

Audit Gives Thumbs-Up To Voter List; Doubts Linger
Rectifying one of the greatest sources of outrage and discontent surrounding previous elections, the voter list compiled for upcoming commune elections has passed an audit with flying colors, though commentators remain skeptical as to whether the country will actually witness free and fair elections on June 4.
— The Cambodia Daily (paywall)

Plantation Found With Logs Absolved Before Probe Ends
Authorities in Kratie province have identified a rubber plantation where nearly 50 cubic meters of illegally logged luxury-grade timber was found on Sunday, but are ruling out the owners as suspects before the investigation is completed.
— The Cambodia Daily (paywall)

Cambodia Slams West, NGOs For ‘Disinformation’ Undermining Ruling Party
Cambodia’s government on Tuesday slammed what it said is an ongoing campaign of “disinformation” led by Western governments and nongovernmental organizations (NGOs) against Prime Minister Hun Sen’s ruling party as part of a bid to unseat it.
— Radio Free Asia

Jiang Jianguo: President Xi’s book can boost ties with Cambodia
I am very pleased to meet all you friends in beautiful Phnom Penh. All our Cambodian media colleagues present here have for a long time kept a close watch on and covered China and thus made important contributions to the enhancement of China-Cambodia friendship.
— China.org.cn

Seabees’ departure reflects dwindling US aid
The US embassy in Cambodia announced earlier this month that a US Navy aid unit was told to leave the country because the Royal Government of Cambodia made a decision to postpone its program indefinitely.
— Global Times