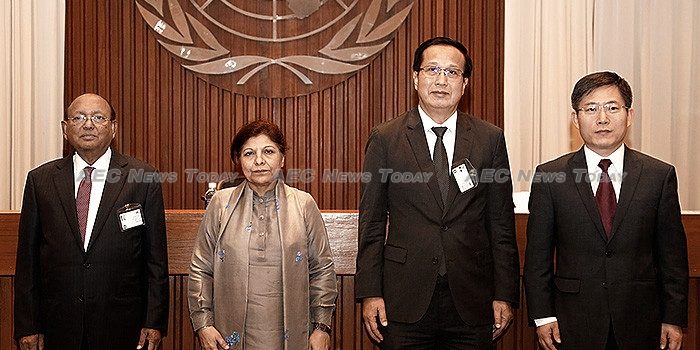 Cambodia has become the first Asean member nation to sign up to a UN framework aimed at the establishment of paperless cross-borer trade in Asia.

The tiny Southeast Asia Kingdom joined Bangladesh and regional heavyweight China in a signing ceremony at the United Nations Economic and Social Commission for Asia and the Pacific (Escap) headquarter in Bangkok last Friday, August 29 as part of the High-Level Dialogue on Enhancing Regional Trade through Effective Participation in the Digital Economy.

The Framework Agreement on Facilitation of Cross-border Paperless Trade in Asia and the Pacific (FAFCPTAP) is designed to streamline cross border trade by eliminating paper records, with even a partial implementation capable of boosting exports by $36 billion annually, cutting as much as 44 per cent off the time required to organise exports, and slash up to 31 per cent from export costs. Full implementation could see export trade in the Asia-Pacific region top $250 billion annually, a recent Escap study found.

According to Escap executive secretary, Dr Shamshad Akhtar, on average cross border trade transactions among 27 to 30 different parties involve 40 documents, 200 data elements — 30 of which are repeated at least 30 times — and the re-keying of 60 to 70 per cent of data at least once.

Citing Indian exports to Bangladesh as a typical scenario that the FAFCPTAP is designed to eliminate, Dr Akhtarthe said exporters must obtain up to 330 signatures on 17 documents at multiple stages to sell their products into the neighboring market.

Open to all 43 Escap member states, the FAFCPTAP will assist signatory nations in implementing

As to when Cambodia will be in a position to begin introducing paperless cross-border transactions Cambodia Minister of Commerce, Pan Sorasak, who signed the agreement on behalf of Cambodia,would not speculate. The fist step is to prepare the information technology systems in all related authorities, draft regulations, and train more human resources in fields related to paperless transactions, he said, adding that Escap was providing considerable knowledge-based assistance.

The treaty is open for signing at the United Nations headquarters in New York until September 30, 2017 and will enter into force 90 days after five countries have ratified the agreement. Countries which have expressed a desire to sign the FAFCPTAP include Azerbaijan, Bhutan, Lao PDR, Iran, Pakistan and Samoa.