Polo and pachyderms are perhaps not the most obvious of pairings, but elephant polo – which, according to its official history, ‘started out as a whimsical conversation between two sport lovers and evolved into the adventurous sport of polo played on the back of elephants’ – is returning to Thailand for the annual spectacle of the King’s Cup. 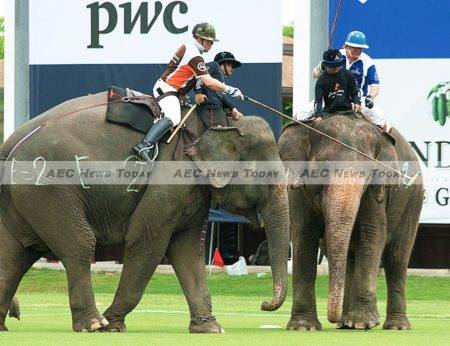 For four days in March, a herd of 18 gently lumbering giants will amble along the banks of Thailand’s mighty Chaophraya River in Bangkok in competitive pursuit of a large rubber ball – celebrity mahouts perched between the elephants’ rhythmically flapping ears.

This magnificent sight provides a vital opportunity for these elephants to escape their often-harsh environments – working in tourist trekking camps in Pattaya, or unemployment in Surin – and be given proper food, vitamins and veterinary care.

“The worst trekking camps can be tough for any elephant: to make money, mahouts are forced to work their elephants 10 to 12 hours a day,” said a spokesman for Anantara Hotels, Resorts & Spas, which founded The King’s Cup Elephant Polo Tournament in Thailand. “But at home in Surin, unemployment means elephants are often left isolated from each other. Many are secured with a short chain on two legs, 24-hours a day, with neither exercise nor enrichment.

“In both circumstances, the poverty of existence means their owners cannot afford to feed them anything close to their daily physical needs; emotional needs are forgotten, and shade and sufficient water are often overlooked.

The King’s Cup elephant tournament schedule is designed to give these trekking elephants rest and relaxation on a scale they are never afforded in their ‘normal’ lives and ensure elephant rest-time, with interaction and enrichment, that neither set of elephants gets in their daily lives.”

Now in its 14th year, The King’s Cup Elephant Polo Tournament in Thailand also raises much-needed funds to support projects that better the lives of Thailand’s elephants, both wild and domesticated.

Beneficiaries have included clinics using elephants in therapy sessions for autistic children; the Thai Elephant Conservation Centre, which was donated a purpose-built elephant ambulance and a gantry to help lame elephants to stand, and the Government Elephant Hospital in Krabi, which received an all-terrain vehicle.

Also supported have been farmer/elephant conflict-mitigation projects in three Thai national parks; the planting of 4,000 trees to form an elephant-proof fence, and the protection of 18,000 hectares of forest in Cambodia’s Cardamom Mountains.

The four day event not only includes the lumbering on-field action, but also encompasses a Children’s Education Day, an elephant buffet, and a Ladies ‘Bangkok Ascot’ Day where high-fashion is the order of the day.

Every elephant attending the King’s Cup Elephant Polo tournament has a unique microchip, which is required by law and means Thai authorities know the animal was not taken from the wild.

The elephants receive no specific training to play polo, and only young elephants who like to run around are chosen to play the game, although some are better than others!

Each elephant only plays two games, for a total of 28 minutes, each day. Compare this to working 10 hours a night on the street, or five hours a day in a trekking camp.

Anantara Riverside Bangkok Resort is offering exclusive ‘ele-polo’ packages for the duration of the 2016 King’s Cup Elephant Polo Tournament in its 11-acres of verdant gardens, starting from US$ 191. 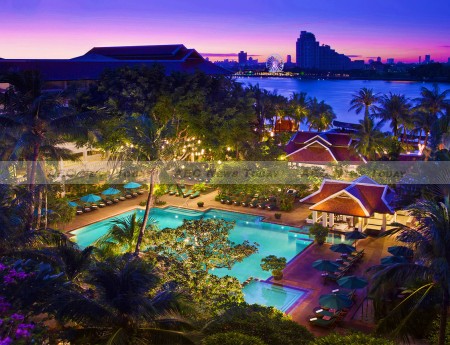 Day tickets are also available for Bt200 ($5.62) per person from the Front Office, Anantara Riverside Bangkok Resort and the pitch on tournament days with gross proceeds going to the Golden Triangle Asian Elephant Foundation.

Anantara has long been associated with elephant conservation efforts: Anantara created The Golden Triangle Asian Elephant Foundation, which has so far rescued more than 40 elephants off the streets of Thailand.

It also brought to Bangkok the hugely successful Elephant Parade, at which 88 elephant statues were decorated by celebrities and artists from all over the world to honour the 88th birthday of HM King Bhumibol Adulyadej. They are due to be auctioned in February.