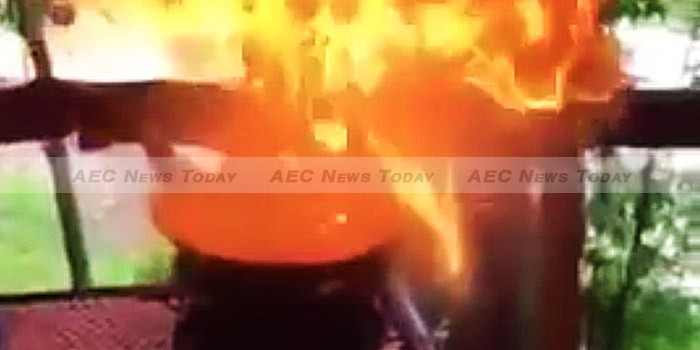 Chefs the world over are renowned for adding a little extra pizazz to their cooking when under the public gaze and in Thailand where cooking schools and tours are a common tourism ‘attraction’ the situation is no different.

However, in the northern city of Chiang Mai one show-off Thai chef got more than he bargained for while attempting to add a little extra pizazz to his stir-fried water spinach cooking demonstration, adding a whole new meaning to Hells Kitchen.

Also known as morning glory or kangkong the Ipomoea aquatica plant is a common plant used for cooking in all Asean member nations where is found growing naturally or cultivated in waterways.

Stir-fried water spinach where the shoots and leaves are stir-fried with chili pepper, garlic, ginger, dried shrimp paste (belacan/terasi) and other spices is one popular vegetable dish, while in Penang and Ipoh it is cooked with cuttlefish and a sweet and spicy sauce. In Indonesia popular dishes incorporating morning glory/ water spinach are gado-gado or pecel salad where it is served with a peanut sauce.

Stir fried water spinach is always a visually dazzling experience with all of the ingredients tossed into a blazing hot wok and the liquid in the ingredients instantly sending a large plume of chili-laden oil vapor into the air which instantly ignites from the gas flames providing the heat. Many a motorcycle rider can attest to the burning sensation the combination inflicts on the eyes and throat if riding past a street vendor just as the mix is added to the wok.

After positioning a tourist filming his cooking demonstration this unnamed show-off Thai chef fires up his gas burner and empties his bowl of ingredients into the searing hot wok. The expected cloud of oil vapor is instantly expelled upwards and catches fires in a spectacular display.

The how-off Thai chef continues with his cooking as the tourists wonder whether the dried grass roof of the kitchen should also be blazing. The chef finally attempts to extinguish the blazing roof by throwing water upwards, while the more practical tourists start looking for a fire extinguisher.