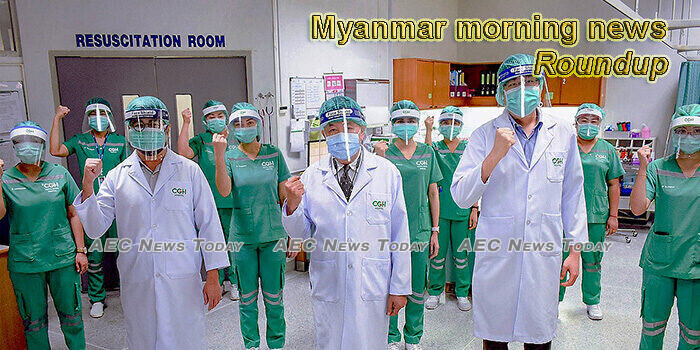 Myanmar Lifts Last Stay-at-Home Restrictions at Its COVID-19 Epicenter
Partial lockdown restrictions have been lifted in Yangon’s Insein Township, formerly a COVID-19 hotspot, after several weeks of no new local transmissions in the city.
— Irrawaddy

Construction sector in Myanmar expected to receive share of COVID-19 loans
The government will deploy its seventh tranche of COVID-19 loans, this time to about 300 business affected by the pandemic, in the first week of July.
— Myanmar Times

Myanmar minister stresses need to boost farming capacity to earn US$1bil yearly from fishery export
If Myanmar can improve domestic farming capacity, up to US$1 billion could be earned yearly from export of fishery products, said Deputy Minister for Commerce Aung Htoo.
— The Star Online

As Domestic Tourism Reopens in Myanmar, Businesses Struggle to Get Back on Their Feet
Domestic travel in Myanmar began to reopen in June after the sector saw revenues drop to zero in April in May.
— Irrawaddy

After ASEAN & India, Now Myanmar Accuses China Of Creating Trouble On The Border
Myanmar has accused a “foreign country” of arming the nation’s rebel groups, including the Arkan Army (AA). Hinting at China’s active role, Myanmar has alleged that Beijing is supplying sophisticated military weapons to create insurgency in the nation.
— Eurasian Times

Myanmar bishops call for end to conflicts and investing in peace
In a statement, the Catholic Bishops’ Conference of Myanmar (CBCM) laments the continuing conflicts in the country amid Covid-19 and urges the government and armed groups to negotiate peace.
— Vatican news

How is Covid-19 transforming Myanmar’s digital economy?
Covid-19 has shaken up the development of the digital economy in Myanmar, with the pandemic leading to a rise in demand for home broadband in this traditionally mobile-first market.
— Oxford Business

Health ministry urges people in Myanmar not to ignore H1N1
COVID-19 may be uppermost in people’s minds these days but they should also be aware of annual diseases that hit the country, especially H1N1 flu, the Health and Sports Ministry has warned.
— Myanmar Times

Sporadic factory operation forces Myanmar workers to return despite Thailand’s easing of lockdown
Although lockdowns in Thai provinces have been eased, Myanmar migrant workers are still returning home as their factories could not operate regularly, and 366 workers returned on June 28 alone.
— Eleven Myanmar

Thousands flee in expectation of Myanmar military operation
Thousands of people in an area of western Myanmar where there have been clashes between the government and ethnic rebels have been fleeing from their villages over the past week after an evacuation order from officials.
— Hindutan Times

Myanmar: Confirmed COVID-19 positive cases, as of 29 June 2020 (14:00)
As of 29 June 2020, there have been 299 confirmed cases, including six fatalities and 218 recoveries across the country. The rate of local transmission has been low so far with cases confirmed mainly among people returning from abroad.
— Reliefweb

Health ministry urges people in Myanmar not to ignore H1N1
COVID-19 may be uppermost in people’s minds these days but they should also be aware of annual diseases that hit the country, especially H1N1 flu, the Health and Sports Ministry has warned.
— Myanmar Times

MoSWRR provides medical supplies to IDP camps
The Ministry of Social Welfare, Relief and Resettlement have been carrying out prevention, control and response measures against COVID-19 at the IDP camps in the country in cooperation with the relevant departments and organizations.
— The Global New Light of Myanmar

Coronavirus Treatment With Remdesivir to Cost $2,340 per Patient
The manufacturer of remdesivir said it would supply the coronavirus drug to developed countries at a price of US$2,340 per patient for a five-day course.
— Irrawaddy

Thailand hands over 75 human trafficking victims to Myanmar
A batch of 75 Myanmar nationals who were victims of human trafficking in Thailand returned home through the Myawady-Mae Sot Friendship Bridge 2 on 26 June.
— The Global New Light of Myanmar

Union Minister U Kyaw Tin participates in videoconference of Special ASEAN-Australia Foreign Ministers’ Meeting on COVID-19; Australia announces a package of initiatives on COVID-19 response and recovery
Union Minister for International Cooperation U Kyaw Tin participated in the videoconference of the Special ASEAN-Australia Foreign Ministers’ Meeting on COVID-19 at 2:00 pm yesterday from the Ministry of Foreign Affairs, Nay Pyi Taw.
— The Global New Light of Myanmar

Police Sergeant Stabbed to Death in Myanmar’s Rakhine
An officer in the Rakhine State capital, Sittwe, was attacked at his house by two men. The authorities have failed to find those responsible for several recent killings.
— Irrawaddy