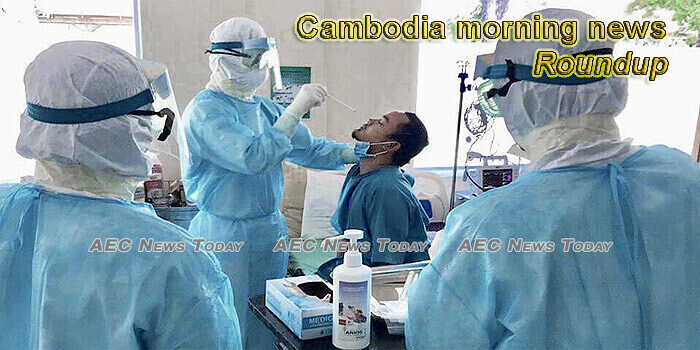 New Report Shows Garment Workers Eating Less, Selling Land to Repay Debt
Almost all the respondents to a garment worker survey said they were indebted and had to eat less food, take another loan, or sell their land to repay their debts, according to findings released by a local union and two rights groups.
— VOA Khmer

Discrimination claimed in issuance of IDPoor cards
Some Phnom Penh residents are claiming that they are living in extreme poverty but are unable to obtain IDPoor cards for food and medical aid due to discrimination by local authorities.
— Khmer Times

Journalist charged with incitement in capital
Phnom Penh Municipal Court on Sunday charged and detained a journalist and publisher over alleged incitement in the capital.
— Khmer Times

Measles cases rise sharply
Cambodia has recorded 341 measles cases in the first four months of this year, a significant increase from just 44 cases in the same period last year.
— The Phnom Penh Post

Deadline for FPCS registration ends today
Today is the last day for foreigners to register (via landlords) for the Foreigner Presence in Cambodia System (FPCS), an electronic application form launched this year by the Ministry of Interior’s General Department of Immigration, which aims to record data about foreigners living in and visiting Cambodia.
— Khmer Times

Brakes put on auto imports
With the Covid-19 pandemic cutting into the global vehicle and parts manufacturing industry and transforming Cambodians’ spending habits, imports have seen a sharp decline this year.
— The Phnom Penh Post

Cambodian returnee who returned from Malaysia and tested positive for COVID-19 had been treated and discharged in Malaysia
One of the two Cambodians who were tested positive for COVID-19 after returning to Cambodia from Malaysia on 26 June was a former patient in Malaysia and had been successfully treated and discharged from a Malaysian hospital before flying to Cambodia.
— Khmer Times

9,000 workers receive soft skills training
The Ministry of Labour and Vocational Training (MoLVT) had organised a soft skills training courses for 8,585 workers from different factories, four of which are located in Phnom Penh and three others in Kandal, Kampong Speu and Pursat provinces.
— Khmer Times

RAC: Consult institutions before coining new words
The president of the Royal Academy of Cambodia (RAC) Sok Touch asked all ministries and institutions to consult with the National Council of Khmer Language (NCKL) before creating a new word.
— The Phnom Penh Post

Cambodia’s Irrigation Accessible by 62% Farm Land
As of mid-2020, Cambodia’s irrigation systems have been accessible by about 62 percent of the total 2,957,400 hectares of farm land throughout the country.
— AKP

One-stop vehicle ownership transfer process streamlined
The ministries of Public Works and Transport and Economy and Finance (MEF) are working to quicken the procedure of an inter-ministerial parkas – “Formality and Procedure on the Transfer of Vehicle Ownership”.
— The Phnom Penh Post

EU Must Toughen Sanctions on Cambodia After Arrest of Third Reporter in as Many Months: RSF
The European Union should ramp up sanctions against Prime Minister Hun Sen’s government in Cambodia after a third reporter in three months was arrested for “inciting chaos,” Paris-based media watchdog Reporters Without Borders (RSF) said Tuesday.
— RFA

Businesses shut amid Covid exempted from ‘payments’
The Ministry of Labour and Vocational Training announced that businesses closed due to the Covid-19 pandemic do not have to pay “damages” and “prior notice payments” to workers.
— The Phnom Penh Post

NGO report: Gov’t wrong to evict poor
Prek Pnov district authorities have denied a report by NGO Sahmakum Teang Tnaut (STT) which claims that it continued to evict poor families from their homes over the past three months while they struggled financially due to the Covid-19 pandemic.
— The Phnom Penh Post

Seeking redress: More than 50 workers protest over unpaid dues at ministry
More than 50 workers of New Best Global Textile Co Ltd in Kampong Speu yesterday staged a protest in front of the Labour Ministry over wages and compensation owed after their employer fled three months ago.
— Khmer Times

Phnom Penh’s Waste Back to Pre-Pandemic Levels
The gradual return to normality in Phnom Penh has been reflected by the resurgent hum of traffic, the open signs on bars, restaurants and cafes, but now—according to the city’s garbage collectors—even the volume of waste generated by the city has returned to pre-pandemic levels.
— Cambodianess

Cambodia and Vietnam have undertaken joint naval patrol
The Royal Cambodian Navy and the Vietnam People’s Navy held their 59th annual joint maritime patrol on the historical waters of the two countries on June 23-24.
— Khmer Times

Families of Detained CNRP Members Tell of Harassment, Calling for Government and International Intervention
The sounds of chanting cut through the air outside the Municipal Court in Phnom Penh on the morning of June 26 as a group of women staged a peaceful protest that attracted armed police and security forces.
— Cambodianess

Kem Sokha accused of ‘paying lip service’
Amid his ongoing trial over a treason charge, former opposition leader Kem Sokha has committed to not fleeing the country, calling instead for national reconciliation among Khmers.
— Khmer Times

Tourists Urged to Visit Kratie’s Irrawaddy Dolphins
Both national and foreign tourists have been urged to visit Irrawaddy dolphins in Kratie province, among other local tourism destinations.
— AKP

‘Reuse-ful’ ways to solve Cambodia’s waste problem
In 2018, Khmer Times reported a 10 percent increase per year in waste generated by the Kingdom. In 2019, Phnom Penh alone generated up to 3,000 tonnes of waste daily – with Cambodia as a whole producing over 10,000 tonnes – the equivalent to 3.6 million per year.
— Khmer Times

Police bust couple for pushing narcotics
Banteay Meanchey police on Tuesday sent a couple and more than 6,000 methamphetamine pills being evidence to the provincial court.
— The Phnom Penh Post

Accused offender cites ‘consensual sex’ as grounds for appeal
A man convicted of having sexual intercourse with a 14-year-old girl in Phnom Penh in 2017 requested an Appeal Court judge to reduce his sentence on Tuesday.
— The Phnom Penh Post

Mine and UXO explosions kill two as this year’s mine-related casualties decline
Two men were killed on Sunday in separate cases of landmine and unexploded ordnance explosion in the provinces of Kandal and Battambang.
— Khmer Times