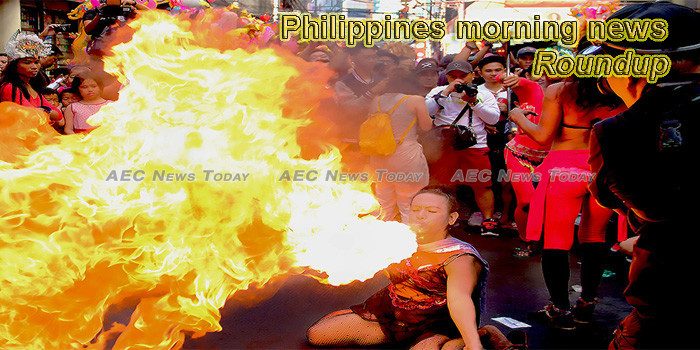 Philippines set to pass budget on Friday after monthlong impasse
The Philippines’ 2019 budget is set to be ratified on Friday, ending a monthlong impasse and limiting the damage to one of Southeast Asia’s fastest-growing economies.
— Nikkei Asian Review (paywall)

Measles outbreak spreads to regions
The Department of Health (DoH) has confirmed that measles outbreaks have been reported in various regions across the country, leaving at least 56 dead in the National Capital Region (NCR or Metro Manila), Central Luzon and Eastern Visayas.
— The Manila Times

PHL dollar reserves rose to $82.13 billion in January
THE country’s gross international reserves (GIR) as of end-January again breached the $80-billion mark due to the net foreign-currency deposits of the government and the increase in the international price of gold.
— Business Mirror

Palace: Duterte to exercise veto power over 2019 budget if needed
President Rodrigo Duterte will exercise his veto power if some items in the proposed P3.757-trillion national budget for 2019 failed to comply with the Supreme Court ruling that declared unconstitutional the pork barrel system, Malacañang said Thursday.
— GMA News

ARMM gets P1.4-B sand and gravel investment
The newly ratified Bangsamoro Organic Law (BOL) is up to a good start this year after a PHP1.4-billion sand and gravel project was approved by the Regional Board of Investments (RBOI), officials said Thursday.
— Philippine News Agency

Mislatel passes major hurdle in 3rd telco bid
The Department of Information and Communication is optimistic Mislatel consortium of Udenna Corp and China Telecom will soon be recognized as the country’s third telecommunication player following the Senate’s move clearing issues on its franchise.
— Malaya

DPWH-7 to roll out P23-B flood control projects for Metro Cebu
The Department of Public Works and Highways (DPWH) 7 (Central Visayas) is ready to implement PHP23.5 billion worth of infrastructure projects that will combat flooding in Metro Cebu in the next three years.
— Philippine News Agency

Vaccination alarm amid Dengvaxia’s legal impact
Two developments relating to the national health issue right now compel prompt action and attention by the government and the public.
— The Manila Times

Hybrid producers ask gov’t to exempt rice seeds from tariff
Domestic hybrid rice producers like SL Agritech Corporation (SLAC) asked the government not to impose tariff on imported rice seeds as part of the liberalization of rice importation in the country.
— Manila Bulletin

Human rights an issue in new US funding support to the Philippines
The Philippines will receive US funding assistance under the newly-signed Asia Reassurance Initiative Act (ARIA) that aims to promote Washington’s security and other interests in the Indo-Pacific region, but no funds will be given in support of the government’s anti-narcotics campaign unless certain human rights standards are satisfied.
— ABS-CBN News

Salceda: P36-billion UCT for 10 million poor families
The government’s unconditional cash transfer (UCT) program, a financial assistance scheme for poor Filipinos will get an additional P12 billion in the 2019 national budget that will cushion the impact of the Tax Reform for Acceleration and Inclusion (TRAIN) on low-income families.
— Manilastandard.net

Palace to certify urgent bill retiring military men at 60
President Rodrigo Duterte will certify as urgent a proposed law suggesting that pension payments for military and uniformed personnel may only start at age 60 instead of 56, the Palace said on Thursday.
— Manilastandard.net

House to ‘cleanse’ recalled drug bill of death penalty provisions
House Majority Leader Fredenil Castro on Thursday said an invalidated drug bill would be “cleansed” of any provision imposing capital punishment before being presented again for second and third reading, preferably before Congress goes on break for the campaign period.
— Philippine News Agency

Foreign traders push for 3 bills to ease investment restrictions
Foreign business groups supported the call of the government’s economic managers for Congress to swiftly approve three bills that aim to lift or ease restrictions on the entry of foreign investments.
— Manilastandard.net

Davao City to release new investment code within 1st half of 2019
THE DAVAO city government is aiming to release a new Investment Incentive Code within the first semester of the year, with the draft now under review for approval by the Investment Promotions Center’s board.
— BusinessWorld Online

$10.9 Billion Philippines Mobile Retail Shopping Market by 2025 – Covering Retail Spend Analysis and Consumer Attitude & Behaviour – ResearchAndMarkets.com
The retail shopping through mobile in Philippines is expected to record a CAGR of 26.9% to reach US$ 10,904.9 million by 2025. The mobile wallet payment in retail industry increased at a CAGR of 27.6% during 2018-2025.
— Business Wire (media release)

Duterte set to sign Rice Bill into law, for the ‘greater good’–Palace
President Rodrigo Duterte will sign into law the rice tariffication bill for “the greater good,” Malacañang said on Thursday, adding that the Chief Executive will not heed the request of the rice industry stakeholders to veto the measure.
— Manilastandard.net

Duterte to ISIS: ‘Do not surrender because I will kill you’
President Rodrigo Duterte warned of more terroristic attacks by the Islamic State of Iraq and Syria (ISIS), which he described as “insane” and “made in hell.”
— Inquirer.net

Protocol in shambles
THE recent Jolo bomb­ings, particularly the Mt. Carmel Church ep­isode, has once again underscored the fragile peace that exists in Mind­anao and vulnerability of churches to attacks.
— Tempo

Plenary approval for one SALN?
IN Article XI, Accountability of Public Officers, of the Philippine Constitution, there is this provision in Section 17:
— Tempo

Lorenzana: PHL to reclaim land on Pag-asa to lengthen runway
The Philippines will soon conduct reclamation activities on Pag-asa Island in the Spratlys to increase the length of its aircraft runway, Defense Secretary Delfin Lorenzana said on Thursday.
— GMA News

House bill filed declaring Manila Bay a ‘reclamation-free’ zone
Progressive lawmakers from the House of Representatives on Thursday filed a bill that seeks to prohibit any form of reclamation activity in the Manila Bay, which is currently under rehabilitation.
— GMA News

Over 6,000 workers regularized in CagVal
At least 6,027 workers in the different private firms in Region 2 were recently regularized through the intervention of the Department of Labor and Employment (DOLE).
— Philippine Information Agency

Phinma finalizing acquisition of Indonesian school this year
THE Phinma Group said the proceeds from a recent transaction with Ayala Corp. will help fund the expansion of its education business in Southeast Asia, as well as its construction business.
— BusinessWorld Online