Lao morning news for May 3 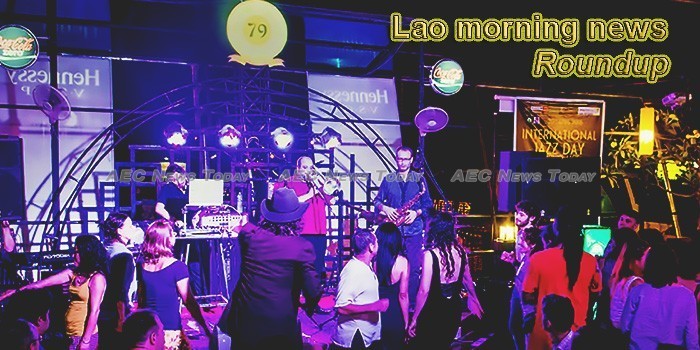 Laos, China sign more deals
Laos and China have signed a new package of cooperation documents, which is expected to take collaboration between the two nations to new heights.
— Vientiane Times

OPINION: Lao GDP growth must be linked to job, income generation
In public administration and development circles, there are two main competing theories. One suggests the government should do nothing except focus on boosting GDP growth while the other indicates that the government should not only maintain GDP growth but also ensure the redistribution of wealth through the greater provision of healthcare and education services.
— ANN/ Vientiane Times

Trade union federation pursues minimum wage hike
In its bid to improve the standard of living of low wage earners, the Lao Federation of Trade Unions (LFTU) has issued a statement telling all businesses that an increase in the minimum wage requires them to pay workers a minimum of 1.1 million kip per month, a 210,000 kip increase on the current rate of 900,000 kip.
— Vientiane Times (paywall)

Over 20 Million Children Miss Out On Measles Vaccine Annually, Creating A Pathway To Current Global Outbreaks – UNICEF
An estimated 169 million children missed out on the first dose of the measles vaccine between 2010 and 2017, or 21.1 million children a year on average, UNICEF said on Apr 26.
— KPL

Chinese-Laotian Relations Show That Win-Win Prevails Regardless Of Size
The Chinese and Laotian Presidents signed an action plan to build a community of shared future earlier this week after the latter’s trip to the People’s Republic to attend the recent BRI Forum.
— OrientalReview.org

Made in Laos 2019 to showcase nation’s export potential
Laos is hoping to raise the profile of domestic products in regional and international markets through the annual Made in Laos Fair with a focus on trade, business-matching and training sessions.
— ANN/ Vientiane Times

Chinese firm Jiangge invests in biggest cement plant in northern Laos
The Oudomxay cement plant in Nathong village, Namor district, Oudomxay province is expected to start production by the end of this year. The factory plans to supply 2 million tonnes of cement products to markets in Laos.
— Vientiane Times (paywall)

Seminar debates human impact on the environment
Humans’ influence on the environment and their ability to change it was the topic of discussion between officials from the Ministry of Science and Technology and other government organisations this week.
— Vientiane Times (paywall)

US Christians Held in Laos Were ‘Treated Well,’ But Lao Believers Still Face Persecution, Group Says
Three U.S. citizens held in Laos last month for handing out religious tracts were “treated well” during questioning by police, but Lao Christians still face persecution at the hands of state authorities, the missionary group to which the three belong said this week.
— Radio Free Asia

Interview: ‘I Thought I’d Make A Lot of Money, Then Send it to My Mother’
A 25-year-old Lao woman from near the capital Vientiane was trafficked to central China’s Hunan Province in late 2018 and sold to a Chinese man for $20,000.
— Radio Free Asia

Laos – Land of a Million Elephants
Laos is diverse and rich in scenery and activities, catering to the needs of most adventurers, culture seekers,
— Globe Rovers

International cyclists band together to help others
International Workers’ Day this week is a good time to recognise the hard work of a different kind put in by a group of committed cyclists dedicated to the job of helping others.
— Vientiane Times (paywall)

Kaya back on track, routs Lao in AFC Cup
Jordan Mintah hit a hat trick as Kaya FC-Iloilo crushed Lao Toyota FC, 5-1, to get back on the win column in the 2019 Asian Football Confederation (AFC) Cup on Tuesday at the Panaad Park and Stadium in Bacolod City.
— The Manila Times

Bangladesh wary of Laos in grand finale
Bangladesh will have their hands full when they take on free-scoring Laos in the final of the Bangamata U-19 Women’s Gold Cup final at Bangabandhu National Stadium in Dhaka Friday.
— Dhaka Tribune

NEW LUXURY LINER AND LAOS ROUTE PLANNED FOR 2020!
After 10 successful years of luxury cruising through the waterways of Southeast Asia, Heritage Line is excited to announce the launching of our new luxury vessel, the Anouvong, along with a new route to exotic Laos in 2020!
— Heritage Line