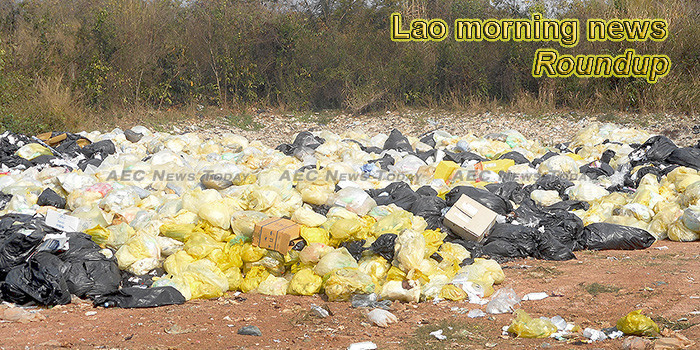 Salavanh Province Sees Increase in Swine Fever Pig Deaths
Salavanh Province, located in the south of Laos, is witnessing an increase in the number of pig deaths amid the spread of African swine fever (ASF).
— The Laotian Times

Controlling goods prices not easy in Laos
The Ministry of Industry and Commerce is encountering hurdles in stabilising the prices of goods in Laos as most are imports from Thailand, according to a ministerial report.
— Vientiane Times (paywall)

Laos Tackles Unemployment by Partnering with Top Jobs Site
The Lao government is to provide information on the job market through a new partnership with the country’s largest employment website operator, 108 Jobs, in a move to tackle growing unemployment issues.
— The Laotian Times

Traffic police start imposing harsher drunk driving penalties
Vientiane traffic police officers are beginning to issue stiffer fines and confiscate the licenses of drunk drivers in a bid to reduce the number of road accidents in the capital.
— Vientiane Times

Laos, Thailand to start building railway extension into Vientiane
Laos and Thailand have agreed to start Phase II of the construction of the Laos-Thailand railway, which will link the existing suburban station to central Vientiane.
— Vientiane Times

Lao-Korean project aims to improve health of schoolgirls
Staff from the University of Health Sciences in Vientiane and the Ewha Woman’s University of the Republic of Korea met in Vientiane yesterday to discuss a project on Girls’ Integrated Health Care Specialists for Upper Secondary Students, to be carried out in the capital’s schools.
— Vientiane Times (paywall)

Ministry to tackle issue of surplus volunteer teachers
The Ministry of Education and Sports is planning to address the issue of volunteer teachers who hope to have their status raised to that of civil servant after working in schools on a purely voluntary basis.
— Vientiane Times (paywall)

BRI Brings Benefits To Participating Countries
The Belt and Road Initiative has played an important role in promoting economic growth, cooperation and people to people exchange between Asia and China as well as Europe.
— KPL

Laos heading for half year trade surplus
Laos is likely to enjoy a trade surplus of about US$121 million for the first six months of the year, even as the government is predicting an overall trade deficit of around US$259 million for 2019.
— ANN/ Vientiane Times

It’s an immigration crisis few know of. And Fresno County might be at the center of it
Thousands of immigrants in the Fresno region and nation could face deportation to a country that’s rarely discussed in the daily news cycle, and in some respects has been forgotten.
— The Fresno Bee