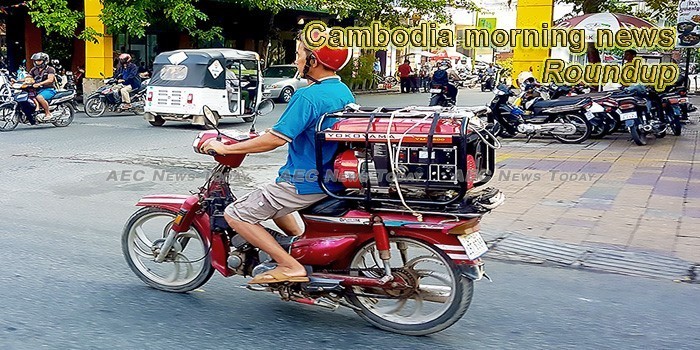 Engagement in Illegal Land Invasion Seriously Banned
As land price in Cambodia continues to rise, the Royal Government of Cambodia has urged the public not to engage in illegal land invasions.
— Agence Kampuchea Presse

Cambodian Journalist Sees Media Situation Deteriorating
Cambodian journalist Aun Pheap used to be a dedicated reporter. He would chase stories for The Cambodia Daily, a local independent paper, and write articles that government officials, businessmen and other powerful players would rather not see published.
— New Delhi Times

PM Hun Sen Urges Journalists to Tell the Truth, Fight Fake News
Cambodian Prime Minister Hun Sen urged all journalists to uphold media professionalism, speak the truth, and provide constructive criticisms in order to contribute to building a just, peaceful, and developed society, according to his letter released to celebrate the 26th World Press Freedom Day on 3 May 2019.
— Fresh News

Employees’ seniority pay to be tax-free: GDT
The General Department of Taxation (GDT) on Thursday said back payments of seniority indemnity for Cambodian employees are tax exempt, while employers can also deduct the payments from their income taxes.
— The Phnom Penh Post

Vietnamese expressway to connect with Cambodian border
Vietnam’s Ministry of Transport is studying a proposal to build an expressway from Ho Chi Minh City to Moc Bai, in the border with Cambodia, according to Vietnamese news outlets.
— Khmer Times

Cambodia to benefit substantially from China’s BRI: Moody’s
Moody’s Investors Service Inc sees Cambodia, which has a B2 stable rating, as one of the countries that stand to benefit the most from China’s Belt and Road Initiative.
— Khmer Times

Ministry of Commerce Approves CTIS 2019-2023 Draft
Ministry of Commerce (MoC) has approved the draft of the 4th generation of Cambodian Trade Integration Strategy (CTIS) 2019-2023 and called for joint implementation from all relevant ministries and institutions to ensure high effectiveness and efficiency.
— Agence Kampuchea Presse

China to Assist Cambodia’s Ministry of Health on Llip Surgery
HE Dr. Mam Bunheng, Minister of Health, on 3 May, received a courtesy visit from Leung Chun-ying, Vice Chairman of the National Committee of the People’s Political Consultative Conference of China, Chairman of the Belt and Road Center, Hong Kong, and GX Foundation.
— Fresh News

Three More BEEP’s Learning Centres Launched
The Ministry of Education, Youth and Sports (MoEYS), in cooperation with the Ministry of Labour and Vocational Training and the UNESCO Office in Phnom Penh, has launched three learning centres of the Basic Education Equivalency Programme (BEEP).
— Agence Kampuchea Presse

RDB says loans to be repaid in time
The Rural Development Bank (RDB) said all loans disbursed under the emergency fund since last October will be repaid in time because the last few rice harvests have been successful.
— Khmer Times

Takeo province set to host Royal Ploughing Ceremony
This year’s Royal Ploughing Ceremony on May 22 will be held in Takeo for the first time since the Prince Norodom Sihanouk government was overthrown in a coup in 1970, with the provincial governor and his wife chosen by the King to perform the tilling and sowing rituals.
— The Phnom Penh Post

Minister asked to examine the possibility of alcohol warnings
The Ministry of Information has written to Minister of Industry and Handicraft Cham Prasidh requesting he examines the possibility of placing warnings on bottles and cans of alcoholic beverages, while it has also prohibited the advertising of alcohol on national holidays.
— The Phnom Penh Post

Ministry bans alcohol ads during Buddhist holidays
The Ministry of Information has issued a letter to all media company owners to postpone the airing of alcohol advertisements during Visak Bochea Day in May and Meak Bochea Day in February.
— Khmer Times

Rainsy handed eight-year prison sentence by Phnom Penh court
Sam Rainsy, the “acting president” of the Supreme Court-dissolved Cambodia National Rescue Party, was on Thursday sentenced to a total of eight years in prison on two charges, with security forces ordered to arrest and throw him in jail.
— The Phnom Penh Post

Ministry calls on journalists to uphold ethics and professionalism
The Information Ministry will today cooperate with Unesco to celebrate World Press Freedom Day in Phnom Penh under the theme of the “media’s role in supporting peace and democracy.”
— Khmer Times

Press freedom event to be held
The Ministry of Information is to meet with the media and relevant institutions on Friday to mark World Press Freedom Day, while the Union of Journalist Federations of Cambodia (UJFC) urged journalists to uphold press freedom for national interests, world peace and justice.
— The Phnom Penh Post

Woman in Banteay Meanchey loses leg after UXO explosion
Explosive remnants of war continue to haunt the Cambodian people with the country at peace, with a 33-year-old woman losing a leg after stepping on a landmine while harvesting bamboo shoots in Banteay Meanchey province.
— The Phnom Penh Post

Body of Cambodian shot in Thailand finally repatriated
The mortal remains of the Cambodian logger who was shot to death late last month in Thailand has been sent to Cambodia following negotiations between the Cambodian and Thai region military commanders.
— Khmer Times

‘Drunk’ policeman shoots car
National Police chief Neth Savoeun has instructed officials to take strict action against the Ministry of Interior’s criminal investigation department deputy head after he allegedly shot at a car in a drunken state in Phnom Penh in the early hours of Thursday.
— The Phnom Penh Post

CRC Calls for Donors to Further Support its Operation
Cambodian Red Cross (CRC) has called on national and international donors to continue supporting the humanitarian course of the agency in Kingdom.
— Agence Kampuchea Presse

Food safety draft law under study
The draft Law on Food Safety is now being studied by the Council of Ministers and is expected to be approved before the end of the year, government officials said.
— Khmer Times