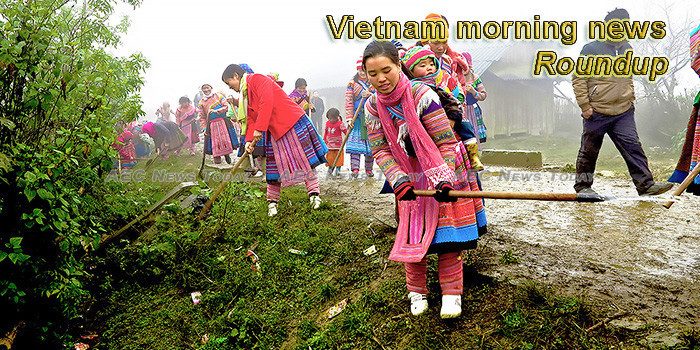 Vinalines posts profit of US$900,000 in 9 months
During the period, the shipping firm handled 62.93 million tons of cargo at domestic ports and transported another 18.66 million, equivalent to 64.1% and 86.9% of the year plan, respectively.
— The Hanoi Times

Tra fish exports to exceed $2b
Tra fish export value is expected to exceed US$2 billion this year, higher than the industry’s target, due to the US-China trade war, according to experts.
— Bizhub

Vietnam vows to heighten localization ratio of thermal power equipment
Mechanical engineering is considered the backbone of the national economy. However, after many years of development, the industry can only satisfy 32 percent of domestic demand.
— VietNamNet Bridge

Ninh Thuan farmers strike it rich with aloe vera
Aloe vera farming has helped farmers in the south-central province of Ninh Thuan adapt to climate change and earn steady incomes since thanks to high demand for the plant to make food, cosmetics and herbal remedies.
— VietnamPlus

Enviromental NGOs call for EU not to sign timber deal with Vietnam
A group of environmental NGOs has called on the European Union to postpone the signing of a trade deal on tropical timber with Vietnam until Vietnam declares a moratorium on illegal timber import from Cambodia’s natural forests.
— Khmer Times

Vietnam Wants to Go Hollywood
Call it Vollywood? Vietnam’s movie scene is growing quickly, with an explosion of theaters across the country, more filmmakers entering the market, and more global attention from the 2017 blockbuster “Kong,” which was set and filmed here.
— VOA

Japan’s MUFG keen to up stake in Vietnamese lender Vietinbank: Report
Japan’s Mitsubishi UFJ Financial Group (MUFG), the largest foreign shareholder in Vietnam JSC Bank for Industry and Trade (Vietinbank), is reportedly looking to increase its ownership from the current 19.7 per cent to 50 per cent in the Vietnamese lender, should the government relax the overseas investment cap in banking.
— DealStreetAsia

City industrial production steady
HCM City’s industrial sectors have seen good growth due to the city’s efforts in creating a better environment for investment and businesses, the city’s Department of Industry and Trade said on October 11.
— Bizhub

Mekong Delta ports need better linkages to increase efficiency
River and sea ports in the Mekong Delta system of Group 6 ports handle a huge volume of goods, but 70 percent amount of goods in the region are still carried by road to Ho Chi Minh City.
— VietnamPlus

HCM City honours outstanding enterprises, businessmen
Up to 99 enterprises and 100 entrepreneurs in Ho Chi Minh City were awarded for their outstanding achievements at a ceremony held in the city on October 13.
— VietnamPlus

Get ready, Global The Internet Could Crash within next 48 hours
Internet users in Vietnam and around the world may experience network connection failures within next 48 hours as the main domain servers and related infrastructure controlling the web will be powered down for some time.
— Vietnam Insider

FDI in Vietnam according to pundits
On the occasion celebrating three decades of foreign direct investment (FDI) attraction in Vietnam, many companies and organisations, including several foreign-invested enterprises who have been honoured by the Vietnamese government with prestigious awards for their outstanding FDI contributions and achievements, talked with VIR about their view on Vietnam’s foreign investment journey, what changes they would like to see, and what upcoming trends they anticipate.
— VietnamNet Bridge

Taking the HIV/AIDS blood test is key in fighting against HIV/AIDS
I don’t want to live anymore”, said the 31-year-old woman who came to our healthcare center in Thua Thien Hue province that day. Instead of a casual greeting, her first sentence broke out with tear in her eyes and that worried me. She stepped into my counseling room and after a long silent pause, I asked “what can I help you?”
— Mekong Commons

Mattis pushes closer ties to Vietnam amid tension with China
By making a rare second trip this year to Vietnam, Defense Secretary Jim Mattis is signaling how intensively the Trump administration is trying to counter China’s military assertiveness by cozying up to smaller nations in the region that share American wariness about Chinese intentions.
— WAFF

Cambodia to Again Search for US Vietnam War Dead
Cambodia has agreed to resume a search effort with the United States for the remains of Americans killed in the Vietnam War, the Foreign Ministry said Sunday, after suspending the program a year ago as tension rose between the two countries.
— VOA Cambodia