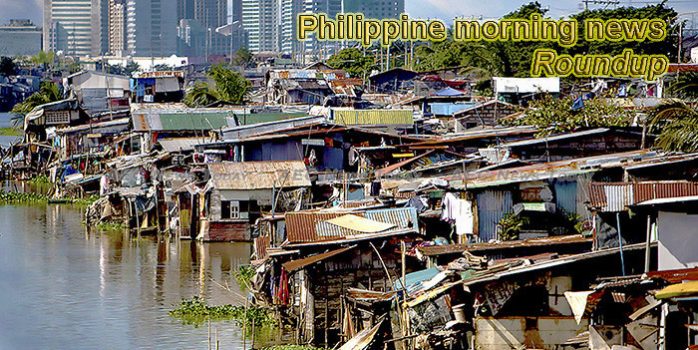 Tourist arrivals rise 8.5% in 8 months
Foreign arrivals increased by 8.5 percent to 4.85 million in the first eight months despite a decline in a number of top source markets, according to data from the Department of Tourism (DOT).
— The Philippine Star

Gross borrowings jump 10%
The government’s gross borrowings in the first eight months of the year jumped by 9.98 percent, as funds borrowed externally posted a double-digit hike following the issuance of Samurai bonds in August.
— Malaya

Government: P109 million aside for centenarians
The national government has set aside another P109 million to pay for the P100,000 cash gift of 1,090 Filipinos who will turn a century old next year, an opposition lawmaker said on Saturday.
— Manilastandard.net

Philippines Retains UN Rights Council Seat Despite Duterte’s Drug War
The Philippines on Saturday announced its election to the U.N. Human Rights Council, calling it a proof that President Rodrigo Duterte was on the right track despite backlash from rights groups slamming the thousands of deaths in his anti-drug war.
— Benar News

EU to partner with PH, other nations on managing plastic use
The European Union (EU) will launch a regional program in 2019 to strengthen cooperation with the Philippines, and select countries in east and southeast Asia towards “sustainable” consumption and production of plastic which had been contributing to problems posed by climate change.
— Philippine news Agency

Rising interest rates add P400M to developer’s interest payment
DoubleDragon Properties Corp. may have to spend close to P450 million in interest expense on its outstanding loan annually due to the rise in interest rates.
— Malaya

LIST: Boracay hotels, resorts allowed to open this October
The Department of Tourism has allowed more resorts and hotels to operate when Boracay Island reopens on October 26.
— CNN Philippines

PDRF partners with FAO in making PH a ‘healthier and safer country’
The Food and Agriculture Organization of the United Nations (FAO) and the Philippine Disaster Resilience Foundation (PDRF) have signed a memorandum of understanding (MOU) that will enable collaborations on emergency response, preparedness, mitigation and building livelihood resilience.
— Manila Bulletin

SoKor to hike trade, Investments in PH
The Republic of Korea has pledged to increase its trade and investments in the Philippines as a result of a deepening relationship between the two countries.
— Malaya

Duterte: Thorough probe first before blaming Chinese for drugs in PH
President Rodrigo Duterte on Sunday, October 14, said the Chinese should not be immediately blamed for the presence of illegal drugs in the Philippines.
— Rappler (video)

PH running out of rules-compliant garment factories – FOBAP
The garment manufacturing industry is running out of good factories to produce apparel as more orders intended for China have been diverted to the Philippines as a result of the trade ware between the US and China, according to the Foreign Buyers Association of the Philippines (FOBAP).
— Manila Bulletin

Hit squads under scrutiny as Philippine elections loom
Manila: Authorities in the Philippines are closely monitoring the activities of some 77 private armed groups in the run-up to the May 2019 mid-term elections, a senior official has said.
— Gulf News

AC Energy inks $83-million EPC contract for development of solar farms in Vietnam
AC ENERGY, Inc., along with its Vietnamese partner, has signed construction and financing contracts for the development of solar plants in Vietnam valued at an estimated $83 million, the Ayala-led company said during the weekend.
— BusinessWorld Online

Boracay tourists advised: No booking in establishments without gov’t clearance
THE DEPARTMENT of Environment and Natural Resources (DENR) warned tourists in Boracay against making reservations in establishments which have not yet received government clearance to operate.
— BusinessWorld Online

PHL pork imports seen expanding by 11% in 2019
The country’s pork imports could rise by 11 percent next year to augment local supply and meet the increasing demand for pork, according to the United States Department of Agriculture (USDA).
— Business Mirror

DOH: 128 HIV cases recorded in August
Cases of human immunodeficiency virus (HIV) due to paid sex continue to rise, a recent report by the Department of Health (DOH) showed.
— The Philippine Star

PH data analytics firm among the Top in Asia
Data science and management consulting firm, Cobena, is the only Filipino startup to make it to APAC CIO Outlook’s Top 10 Business Intelligence (BI) Solution Providers in 2018.
— The Manila Times

LandBank to aid poor towns in northern Luzon
Government-owned Landbank of the Philippines (LandBank) kicked-off on Friday a series of forum with fourth to sixth class municipalities from Regions 1, 2, 3 and the Cordillera, to aid small towns in passing the Seal of Good Local Governance (SGLG) and avail of the bank’s loans for development programs.
— Northbound Philippines