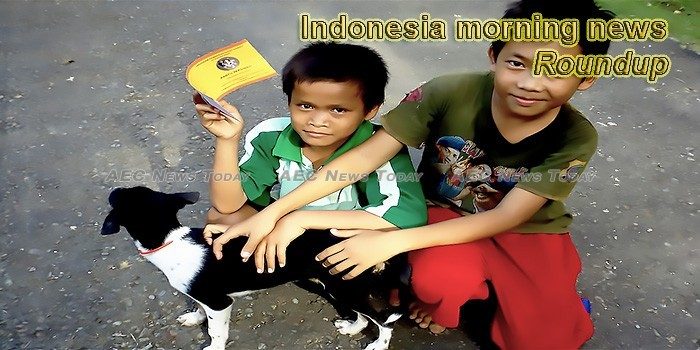 Indonesian Gov’t Confused: Postpone Power Projects or Not?
Based on the latest reports – and contrary to earlier plans – the Indonesian government will not postpone the development of 15,200 MW of power projects.
— Indonesia Investments

Indomaret tops retailer list with US$4.89b in sales
Convenient store chain Indomaret and Indomaret Point, owned by retail group Indomarco Prismatama, were the top-selling retailers of 2017, racking up a combined US$4.89 billion in sales, according to London-based strategic market research company Euromonitor International.
— The Jakarta Post

Bank Mandiri Issues IDR3 Trillion Bond, Oversubscribed by 1.36 times
Bank Mandiri has completed the bond issuance process in the scheme of I Phase III – 2018 Sustainable Public Offering (PUB) worth IDR3 trillion with an 8.50 percent coupon and a five-year tenor after officially registering the bonds on the Indonesia Stock Exchange on Monday (9/24/2018).
— Netral News

Could Indonesia’s mega-fires return in 2019?
Scientists are warning that 2019 could see the first major test of Indonesia’s new anti-fire measures, which have been criticised by some environmental groups for not going far enough.
— The Ecologist

Magic Money Boxes and Jenglot
The government is this year spending about US$30 billion on education, but plenty of Indonesians still uphold irrational superstitions, putting them at risk of being scammed.
— Indonesia Expat

Interview with Indonesian Ambassador to the UK: H. E. Rizal Sukma
BritCham has undertaken two business UK roadshows a year for the last four years. It is the Chamber’s way to support the positive images of Indonesia overseas, to properly represent the trade and investment opportunities, and to showcase the excellent market access support BritCham provides to British SMEs.
— Indonesia Expat

Bali Festival Expands Support for Indonesian Film Industry Revival
Triawan Munaf, chairman of the Indonesian Agency for Creative Economy (BEKRAF) was on hand on Monday for the opening of the Bali International Film Festival (Balinale). His presence was intended as a sign that Indonesia, Asia’s sleeping giant as a film player, is rousing itself.
— Variety

Fugitive FPI leader Rizieq Shihab reportedly barred from going to Malaysia by Saudi Arabian authorities
Rizieq Shihab, the founder of Indonesia’s infamous Islamic Defenders Front (FPI), has been living in Saudi Arabia for over a year now due to numerous legal problems he faces in his home country.
— Coconuts

Indonesia tackling plastic pollution with sermons on waste
At Nadhatul Ulama’s (NU) facility in Jakarta, children are listening to a sermon, not on the importance of religion but the benefits of caring for the environment.
– CGTN

Rare Sumatran tiger found dead in Indonesia
A critically endangered Sumatran tiger has died after being caught in a hunter’s trap on the Indonesian island of Sumatra, an official said Wednesday (Sep 26).
– Channel NewsAsia

Indonesia 2018 coal output target now around 507mn T
Indonesia has increased its 2018 coal production target to around 507 million tonnes from a previous target of 485 million tonnes, the Energy Ministry said on Wednesday, a move that may add to downward pressure on prices for the fuel.
– Business Recorder

EDC working on potential geothermal development site in Sumatra, Indonesia
Energy Development Corp. (EDC) from the Philippines is working on a concrete geothermal project opportunity in Sumatra/ Indonesia, which could see drilling starting in 18 to 24 months.
– Think Geoenergy

President Jokowi accused of campaigning via gov’t rice, turns out logo model just looks like the him
Few staple goods are as important to Indonesians as rice and many predict the price of the grain, which is consumed by the majority of Indonesians on a daily basis, could play a key part in determining the winner of next year’s presidential election.
– Coconuts

‘I was lost at sea three times’: How one Indonesian teen defied fate
An Indonesian teen was recently rescued after spending 49 days adrift at sea in a fishing hut. But as Aldi Novel Adilang reveals to BBC Indonesian, it’s not his first tale of survival.
– BBC

Indonesia banking: Time to revisit the sins of the fathers
The southeast Asian country was brought to its knees 20 years ago because of the failure of its biggest banks. A generation on, the same clans are back in banking and the regulator says he isn’t fussed.
– Euromoney Magazine

Moratorium shutters mines in east Indonesia
Newly installed East Nusa Tenggara (NTT) Governor Viktor Laiskodat has become the first provincial leader to order a moratorium on mining, on a chain of idyllic islands still largely unaffected by the uncontrolled artisanal mining that has ravaged other parts of Indonesia.
– Asia Times