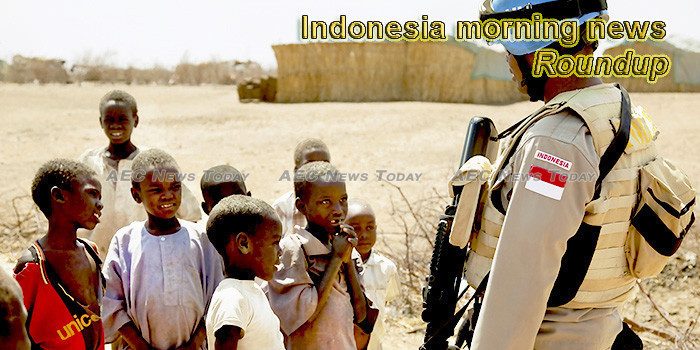 Indonesia US$200m in arrears on fighter project: South Korea
Indonesia has demanded new terms from South Korea on a joint multi-billion-dollar jet fighter development project, as Seoul said on Monday (Oct 22) that Jakarta has not paid its share and is US$200 million in arrears.
— Channel NewsAsia

BMKG Urges Papua Residents to Remain Cautious of Potential Quake, Tsunami
The Meteorology, Climatology and Geophysics Agency, or BMKG, has issued an advisory for residents of Papua to stay cautious for possible earthquake or tsunami, after identifying five disaster-prone districts in the province.
— Jakarta Globe

INDONESIA TO REVIEW CHINA’S BELT AND ROAD PROJECTS IF PRABOWO BEATS WIDODO IN PRESIDENTIAL ELECTION
Infrastructure projects Indonesia signed up to as part of China’s Belt and Road Initiative are likely to be reviewed if former general Prabowo Subianto wins next year’s presidential election, his brother and campaign leader has said.
— South China Morning Post

Indonesia Among World’s Most Underinsured Countries
Indonesia has a $14.6 billion gap between existing insurance coverage and the actual amount it would cost the government and businesses to rebuild and recover from major disasters, according to the latest report by global insurance firm Lloyd’s and the Center for Economics and Business Research.
— Jakarta Globe

Indonesia: First exports of pineapples and bananas to Singapore
Minister of Agriculture Andi Amran Sulaiman has always encouraged people to be creative when it comes to increasing export-scale food production.
— Fresh Plaza

Indonesia sets eyes on halal good and services | Video
Indonesia has the world’s largest Muslim population, and is a huge consumer market for halal products. But with the halal industry set to boom worldwide, the country is gearing up to become a leading provider of halal goods and services.
— Channel NewsAsia (video)

BNI stops credits for apartment ownership in Meikarta
State-owned lender PT Bank Negara Indonesia (BNI) has announced it will stop disbursing credits for ownership of apartments in Meikarta township project, following the arrests of several people, including executives of Lippo Group, by the Corruption Eradication Commission (KPK) in a bribery case.
— The Jakarta Post

Financial risks could derail Asia’s growth
Asia has the potential to continue to be one of the main contributors to global growth. But this does not mean that the road ahead will be easy.
— East Asia Forum

Hong Kong billionaire Li said to near deal to buy CBA’s Indonesia unit
agreement to buy control of Commonwealth Bank of Australia’s Indonesian life insurance arm, people familiar with the matter said, in a deal that would boost the tycoon’s presence in one of the fastest-growing insurance markets.
— Dealstreet Asia

Why You Need To Apply For An Exit Permit Only/EPO In Indonesia
If you are a foreigner holding a temporary stay permit (KITAS) in Indonesia, keep in mind that you must apply for an Exit Permit Only (EPO) if you change jobs, leave Indonesia or shift from one form of KITAS to another.
— Indonesia Expat

WHO classifies people aged 80-100 years as old: Amin
Vice presidential candidate Ma`ruf Amin cited the World Health Organization (WHO) as saying that one can be categorized as an old person if he or she is aged 80-100 years.
— Antara News

Jokowi urges local govt to tech-up
President Joko “Jokowi” Widodo said the government had distributed up to Rp 400 trillion (US$26.4 billion) in infrastructure funds this year to help empower villages, but that impact would be minimal if local administrations did not improve their bureaucracy.
— The Jakarta Post

New crowdfunding rules coming soon: OJK
The Financial Services Authority (OJK) is set to issue a regulation on equity crowdfunding platforms by the end of the year in response to a boom of these platforms facilitated by financial technology (fintech) firms.
— The Jakarta Post

Palu Inmates Volunteer To Help Survivors
Inmates from Palu Detention Centre have volunteered to help the survivors of the earthquake and tsunami. They call themselves Bui Squad (Prison Squad). They distribute food to survivors at temporary shelters as well as help clean residents’ homes and neighborhoods that were damaged by the earthquake and tsunami.
— Indonesia Expat

President highlights Khashoggi case during meeting with Saudi minister
President Joko Widodo (Jokowi) alluded to the case of the murder of journalist Jamal Khashoggi at the Saudi consulate in Istanbul, Turkey, during a meeting with Foreign Minister Adel al-Jubeir at the Bogor Palace, Monday.
— Antara News

Indonesia’s tourism ministry and Expedia strike marketing partnership
Brand Expedia and the Ministry of Tourism, Republic of Indonesia have partnered to promote and drive travel demand to key destinations in Indonesia.
— Marketing Interactive

Government to support e-sports tournaments
Communication and Informatics Minister Rudiantara has expressed readiness to support the e-Sports tournament, with more enthusiasts of the sports branch in the country.
— Antara News

Home-grown terror group JAD remains a threat in Indonesia despite crackdowns: Experts
Jamaah Ansharut Daulah (JAD), an Indonesian home-grown terror group affiliated with the Islamic State in Iraq and Syria (ISIS), remains a threat in the country despite recent crackdowns, the latest report by Jakarta-based Institute for Policy Analysis of Conflict (Ipac) has said.
— The Straits Times

Village Ministry Holds Innovative Rural Communities Development Model Workshop
The Ministry of Village, Development of Disadvantaged Regions and Transmigration through the Department of Foreign Cooperation at the Public Relations and Collaboration Bureau held a sharing of knowledge and experience in building innovative rural communities together with representatives of Asian countries incorporated in the Asian Productivity Organization (APO).
— Netral News

N. Sumatra administration, association plant 10,000 trees to build coastal defense
The North Sumatra administration, along with a Buddhist association, planted on Sunday 10,000 trees on the coast of Lubuk Saban village in Serdang Bedagai regency, North Sumatra, to build a natural seawall to protect the area from potential tsunami waves, among others.
— The Jakarta Post

Bank Indonesia governor eyes sunnier days for rupiah
While Indonesian President Joko Widodo muses that winter may be coming for the world economy and currency markets, his central banker is hoping for an early thaw.
— The Straits Times

Minister Susi declares ship-sinking policy success
Maritime Affairs and Fisheries Minister Susi Pudjiastuti relished in the improved performance of Indonesia’s fishing industry ever since the administration began cracking down on illegal fishing by foreign boats in 2015.
— The Jakarta Post

Bulog blames output for low absorption
State-owned logistics company Bulog has attributed the decline of its rice absorption to the ending of the harvest season and the damage to facilities caused by the Central Sulawesi earthquake, both of which occurred last month.
— The Jakarta Post

Indonesia to naturalize overseas players, recruit foreign coach prior to FIBA Asia Cup 2021
Indonesia will look to grant citizenship of the country to overseas basketball players and recruit a foreign coach in order to set up a strong national team to compete in the 2021 FIBA Asia Cup, the Indonesian Basketball Association said.
— Xinhua

Volunteers, journalists trapped in Sigi after main road blocked by landslide debris
Volunteers and journalists have reportedly been isolated for days in Kulawi district in Sigi, Central Sulawesi, while distributing disaster relief, as flood and landslide debris blocked the main road leading to the provincial capital of Palu.
— The Jakarta Post