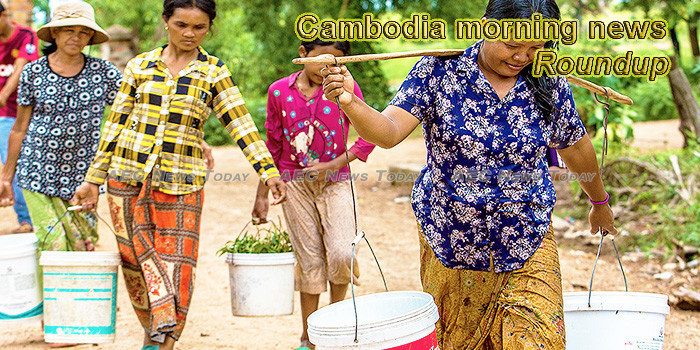 Cambodia’s Hun Sen Slammed For ‘Extravagant’ Travel by Chartered Jet
Cambodian prime minister Hun Sen’s use of a privately chartered jet to fly himself and an entourage of 40 to a meeting of the U.N. General Assembly in September has sparked outrage on Cambodian social media, with many in the still-developing Southeast Asian country angrily questioning how the money was spent.
— Radio Free Asia

Cambodia resumes search effort with US for Vietnam War remains
Cambodia has agreed to resume a search effort with the United States for the remains of Americans killed in the Vietnam War, the Foreign Ministry said on Sunday (Oct 14), after suspending the programme a year ago as tension rose between the two countries.
— Straits Times

Cementing Cambodia’s future, but at what cost?
As the Kingdom’s construction boom continues, the local production of cement has evolved alongside it. But potential environmental issues may prove costly. The $262m state-of-the-art Chip Mong Insee Cement production plant stretches across 110ha of land in Cambodia’s Kampot province, glorious rolling hills of plant-covered limestone serving as its backdrop. The factory site is practically spotless, not what one might expect from a production facility with the capacity to pump out 5,000 tonnes of cement a day.
— Southeast Asia Globe

Wind power in Cambodia is possible, says regional power producer
As the world increasingly opens up to renewable energy, Southeast Asia Globe speaks to Olivier Duguet, CEO and co-founder of the Blue Circle, a renewable independent power producer based in Southeast Asia, to find out more about the region’s future energy path. The company has already begun work on a wind farm in Ninh Thuan province in South Vietnam – one of the largest in the region – and has its sights set on creating a similar farm in Cambodia
— Southeast Asia Globe

Tourism Ministry Records 1,388 Transactions from Top 10 Promotion Destinations in Laos, Cambodia
Ministry of Tourism managed to sell 10 leading tourist destinations in Laos and Cambodia with a potential of 1,388 transactions worth US$719,907. This was stated in the Ministry’s data quoted by Antara on Sunday (10/14/2018).
— Netral News

Enviromental NGOs call for EU not to sign timber deal with Vietnam
A group of environmental NGOs has called on the European Union to postpone the signing of a trade deal on tropical timber with Vietnam until Vietnam declares a moratorium on illegal timber import from Cambodia’s natural forests. Seven non-governmental organizations issued a joint statement on Wednesday, saying that there are serious flaws in the agreement because of continuous flow of illegal timber into Vietnamese market from neighboring countries, especially from Cambodia.
— Khmer Times

Cambodia, Asean need China’s ODA
Cambodia is not alone in looking to China for assistance in her economic development as other nations within the Asean sphere of influence and beyond is also looking at Beijing to provide global leadership to help steer their economic future.
— Khmer Times

ANZ boss says bank will consider compensating Cambodians forced off farms for sugar plantation
ANZ will consider whether to compensate hundreds of Cambodian families who were forcibly evicted from their farms to make way for a sugar plantation and refinery partially financed by the bank, chief executive Shayne Elliott has told a parliamentary committee.
— The Cambodia Daily

‘CRASH SITE’ CLUES MH370 sleuth claims team of soldiers drafted in to search Cambodian jungle after plane wreckage spotted
AN MH370 sleuth claims he is teaming up with an elite squad of jungle troops in a bid to track down the wreckage of the doomed flight. Brit Ian Wilson will reportedly join forces with Cambodian soldiers on a mission through mountains to the north west of Phnom Penh.
— The Sun

Club fire kills one, injures two
A fire ripped through a nightclub under construction in Kandal province’s Ponhea Leu district on Saturday, killing one repairman and seriously injuring two of his colleagues. District police chief Captain Duong Teng, Ponhea Leu said the fire was caused by sparks from welding that fell onto a sofa as the three workers installed air conditioners.
— Khmer Times