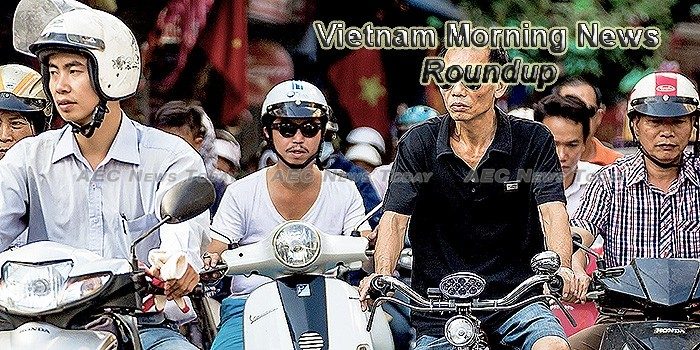 Vietnam morning news roundup by AEC News Today is your one stop for Vietnam news on matters of governance and policies affecting Asean business communities.

US businesses hail Gov’t efforts in improving investment environment
PM Phuc made the statement on Thursday during his reception for a delegation of the US-ASEAN Business Council led by Senior Vice President and Regional Managing Director Michael Michalak.
— VBN

China closes natural forests, Vietnam fears timber shortage
This has caused great anxiety among Vietnamese wooden furniture manufacturers. It is expected that China will have to import 50 percent of the volume of timber it needs, and the majority will be from Vietnam.
— VietNamNet Bridge

The permission was announced by China’s General Administration of Quality Supervision, Inspection and Quarantine (AQSIQ), which allowed 22 firms to export rice and rice products from January 1, counting from the date of departure from the Vietnamese border. Any businesses not listed by AQSIQ were banned from exporting to the Chinese market from January 1.
— VietNamNet Bridge

Vietnam, Thailand enjoy growing friendship
At a reception for the group’s Chairman Sakchai Tanaboonchai in Hanoi on March 8, the NA Vice Chairman took note of the sound cooperation between Vietnamese and Thai legislative bodies, particularly at key forums, such as the Inter-Parliamentary Union and the ASEAN Inter-Parliamentary Assembly.
— VietNamNet Bridge

Vietnam, China hold regular deputy foreign ministers’ meeting
At the function, Deputy Foreign Minister Le Hoai Trung and his Chinese counterpart Liu Zhenmin reviewed progress made in bilateral relations in the past time and discussed ways to boost cooperation, particularly the implementation of agreements and common conceptions reached by leaders of the two Parties and Governments, and the maintenance of peace, stability at sea.
— VieNamNet Bridge

Vietnamese businesses pleased with tax reforms
Over 75 percent of surveyed businesses expressed their satisfaction with tax reforms in 2016, slightly up from 71 percent in 2014, said Dau Anh Tuan, head of the Vietnam Chamber of Commerce and Industry (VCCI)’s Legal Department at an event held in Hanoi on Tuesday.
— VN Express International

Aquaculture eyes international standards
Vietnam’s Directorate of Fisheries (D-Fish) and the Aquaculture Stewardship Council (ASC) will work together on promoting responsible aquaculture in the country.
— VBN

Big Japanese retailers compete with smaller Vietnamese counterparts
7-Eleven has launched a big recruitment campaign to prepare for the opening of its convenience store in HCMC.
— VietNamNet Bridge

Vietnamese fish, seafood segment isn’t ‘cashing in’ with Walmart
Speaking at the forum, Nguyen Hoai Anh, deputy director of Thuan Phuong Company, said that the opportunity to supply millions of fish and seafood products to the 5,000 US Walmart stores under a Vietnamese brand is a dream that is not likely to happen anytime soon.
— VietNamNet Bridge

Opening of H&M, Zara stores puts pressure on local fashion retailers
The opening of the first shops in Vietnam in 2017 has been confirmed by H&M. However, the brand still has not given further information about the plan, including the debut, the number of shops, venues and scale.
— VietNamNet Bridge